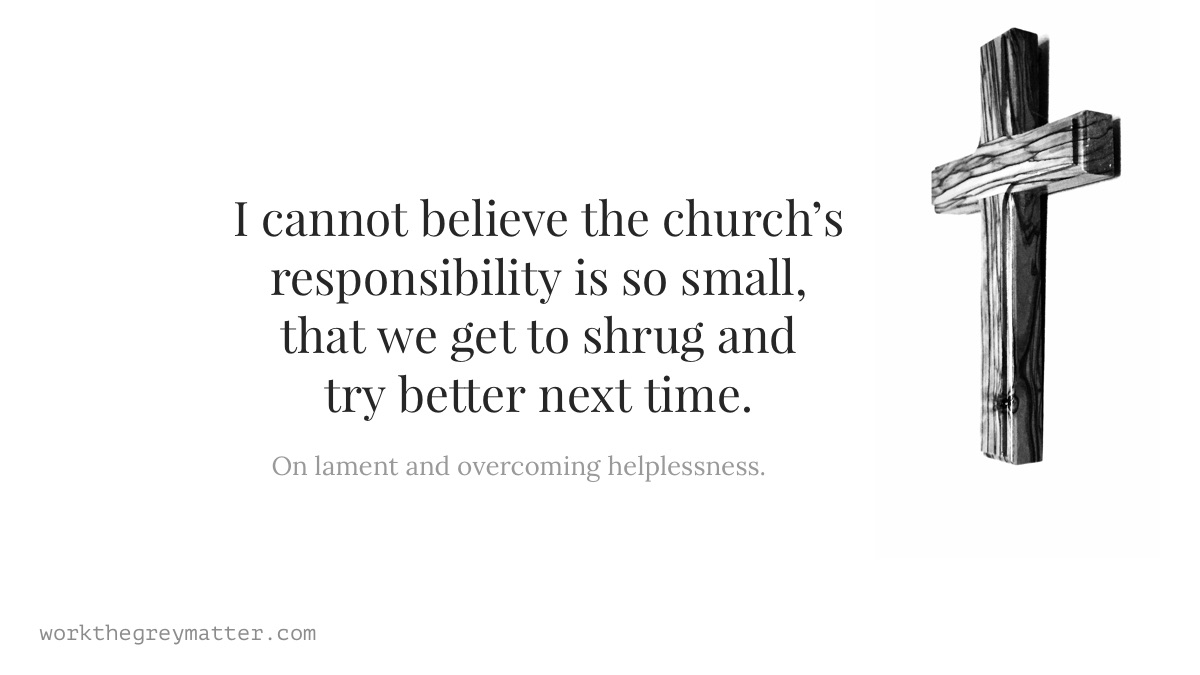 I don’t know about you, but I’ve seen some pretty horrific things passing through my social media feed the last few weeks. And I am not OK.

I’m not going to re-share the relevant images or specifics, but I want to pause for a moment and talk about what to make these stories. Because their haunting horror isn’t easing and I need to find a way to get through my grief and sense of helplessness.

As a Christian, I was not brought up to wrestle with the concept of people dying needlessly and in agony.

Yes, we talked about people dying in tortuous circumstances, but only in the context of Christian martyrdom. And the martyrs – well they were willing to choose that death and they knew that they’d achieve something in it, so… it was sort of OK, I guess? I mean, it wasn’t OK, but you could frame at least frame their deaths in the context of building a better world.

Of course, Christians don’t all have to endure martyrdom to achieve something in their death. To know Christ is to have purpose and by that argument no Christian dies without purpose. As for non-Christians…

But neither was a I challenged to consider the fate of another group of people: non-Christians who died at the hands of cruel injustice and not “for the sake of Christ.”

And this still feels like a massive gap in most Christian discourse.

Now, it’s true that as I got into the more adult and reflective conversations, I found spaces where people said that those people were Jesus. However, whilst I believe there is truth and mystery in knowing that Jesus is the poor (especially in the context of Matthew 25:31-46), that’s not enough for me on its own.

But you know what? That’s not enough.

It’s not enough to stop evil from happening again.

I need more than that.

Many Christians will say this is where secularism fails. For me, it’s where certain brands of Christianity fail.

Because if the goal is simply to pray the “sinners’ prayer” sometime before you die, then everyone who doesn’t is a write off. In this version of events, all those non-Christian souls who died at the hands of injustice are, well, tragic casualties of the church not reaching them soon enough. Except it’s not really the church’s fault, it’s the world’s fault for not letting the church get on with spreading their gospel. So it’s all the more important that the church concentrates on telling people about this prayer they’ve all gotta pray before they die. And that ‘social justice’ stuff looks pretty but it’s a distraction. Actually, if we’re brutally honest (not that anyone would say this in public) doing all that SJW stuff would just mean people are less likely to know they need Jesus…

OK, OK, I know I’m painting a pretty savage picture of Christianity here, but still it feels far too close to the truth for comfort. And it makes me angry, because this is not what the church should be.

The church should be invested in improving the lives of people before death. And when non-Christians die, it shouldn’t shout to everyone who’s still standing with, “Hey, now’s your chance to find Christ!”

But too often it does. Too often that’s all it knows how to do. Or if not, it goes all polite and says “Our thoughts and prayers are with their families” leaving you wondering what those prayers actually are. That the family prays the sinners’ prayer?

This is not my gospel.

This is not what my God desires.

And it’s not what I want my church to be like.

Did I tell you I’m not OK right now?

Don’t get me wrong, I’m not about to say that we aren’t all in need of salvation. For sure, we are.

But we also need a place in our theology for the many, many, many people out there who don’t have a conscious relationship with Jesus but who still die at the hands of cruel injustice. And whatever that theology is, “There’s nothing we can do” doesn’t cut it.

Because I cannot believe the church’s responsibility is so small that we get to shrug and try better next time.

For goodness’ sake — we believe that God became man, that the fullness of the divine resided in a human body. We believe that Jesus overcame death itself. With mysteries like these in our common vocabulary, are we to be so easily deterred by time, when time itself is one of the wonders of God’s creation?

What if… what if the past is only unchangeable in the sense that its wrongs cannot be denied – but everything else can still be shaped and given new meaning and purpose?

If we could believe that, would we be able to feel that all our actions matter? Would we be less inclined to give up? More inclined to persevere? More adventurous with our brief and fragile lives?

What if weeping with those who weep is not just a way we can bring hope to those who live, but also a means by which hope transcends time? Click To Tweet

I think the thing that eats at me most when I think about some of these stories, is knowing that I wasn’t there with these people when it was happening. Which is pretty ironic because growing up, one of the things I was most grateful for was not being a witness to Jesus’s crucifixion.

And I’m not saying that I want to be in those hellish places – I have trouble enough coping with hearing the stories third hand. But I don’t want those people to die alone; and I have to believe, I simply to believe that God was there.

Meanwhile, I have to find a way of entering their story and bringing it into hope.

Fortunately, I’m not the only one who is working on doing this, and I take a lot of comfort in that. Honestly, such a weight is lifted when I see people leading by example, rooting their actions in the past to plant transformation into the future.

I still frequently wrestle with the feeling of not doing enough or focussing on issues that aren’t the ‘real’ issues. And I still haven’t figured out how to reliably tell the difference between cynicism and wisdom. But I am beginning to find ways to deal with my sense of helplessness.

And it’s not just the standard stuff about educating myself, amplifying marginalised voices and making time for difficult conversations within my sphere of influence. It’s also about believing that my participation in the lament of others is something that matters. It’s also about taking time to pray, intentionally, every day, for people who have been forgotten.

Maybe that’s a poetic way of saying “thoughts and prayers”. The thing is though, I don’t know what horrors of our time are going to be unearthed a generation from now. And what will I say when I’m called to account? Am I going to answer, “Oh, I didn’t know. I wasn’t there.” Is that enough? Can that ever be enough?

But if I can say that — in addition to the actions I consciously took — I sat with God, daily, the God who sees everything and knows what it is to suffer and die at the hands of injustice, to bring ripples of hope into my time, at least I will have that.

Meanwhile, I have to believe that if I truly make myself available to God, he will meet with me and make my words and tears mean something.

I saw a good read on the subject of sharing graphic images in The Conversation: Why cellphone videos of black people’s deaths should be considered sacred, like lynching photographs.

I also have a YouTube playlist called Songs of compassion that helps me find solace.

Meanwhile, another tactic I’ve found helpful is to mute certain words on Twitter. You can do this temporarily or permanently. Amongst my permanently muted words is “disgusting” because when I see it, it’s nearly always by someone sharing a horrific story and there’s rarely constructive comment; I’ve also had several instances where the article and the title were much more alarmist than they needed to be, and I’m just not going to spend my time on content like that.