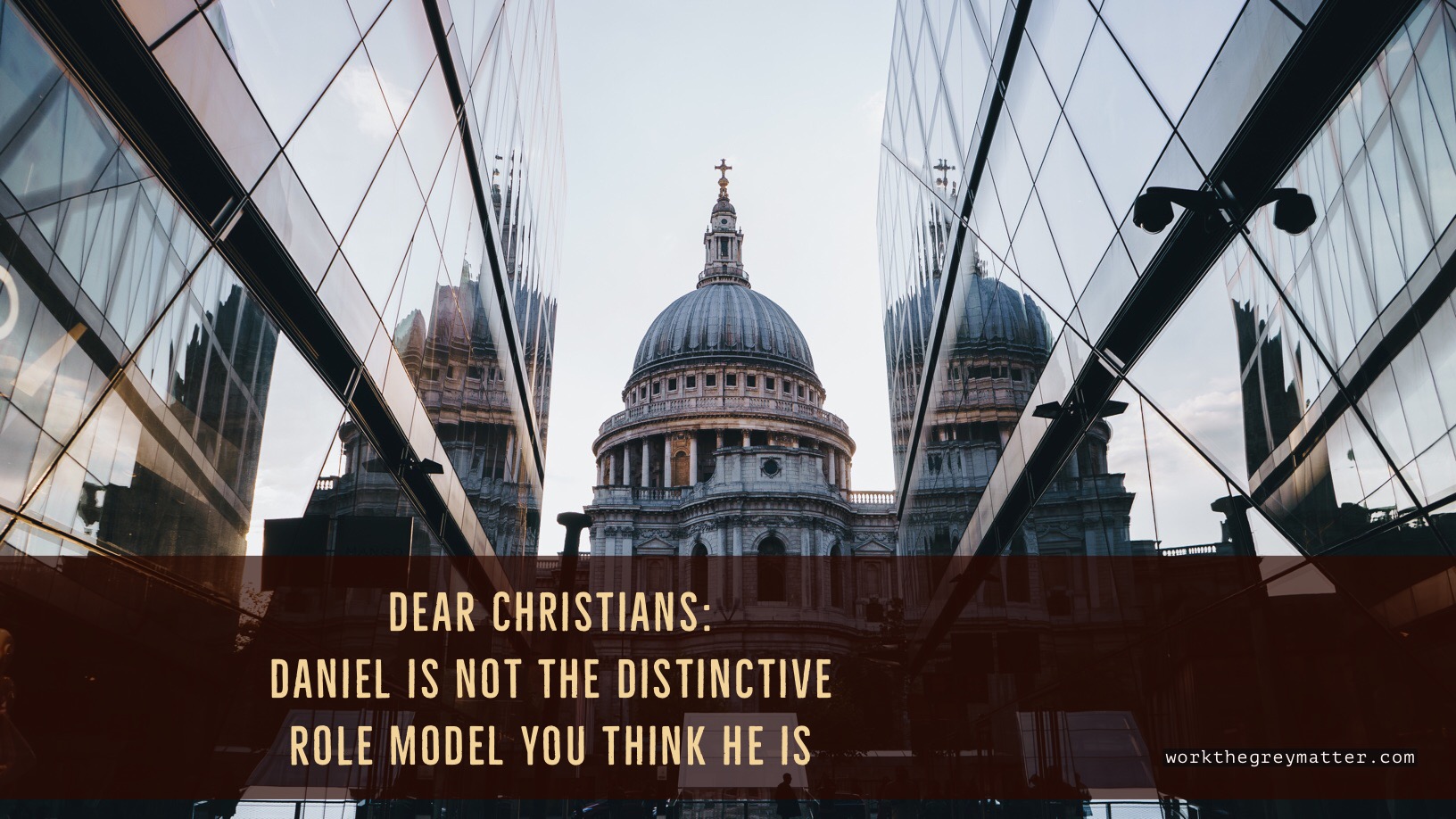 One of my bugbears about the church in the UK and US, is the strong emphasis of non-conformity.

We’re told to be like Daniel and show our distinctiveness. We have to be bold like Shadrach, Meshach and Abednego who would face the fiery furnace sooner than bow down to the Babylonian king. As Paul put it in Romans 12:2, “Do not conform to the pattern of this world.”

I have no complaint about these Bible passages, but I’m tired of this narrative. I think it’s being overused and misused. Not only that, but its counterpart is being missed altogether.

Don’t for a minute think that I’m about to promote conformity, as if we should all look, act and think the same way. (Heaven forbid!) Neither am I about to deny how powerful counter-cultural witness has been in bringing positive transformation to the world at large.

My challenge is around the strong and almost exclusive emphasis placed on non-conformity. It’s as if there is no other way to be church without being slightly strange, a bit different, a bit … unyielding.

Being distinct is what the book of Daniel is all about.

Daniel and his fellow exiles refuse to eat the king’s food (this abstention had nothing to do with food laws, by the way). Daniel braves the lions’ den after praying towards Jerusalem; plus Shadrach, Meshach and Abednego brave the fiery furnace because they refuse to bow to the king’s statue.

For one thing, most modern applications of Daniel don’t do justice to the cultural context of scripture. Daniel is set during the exile in Babylon, spilling over into the beginning of Persian rule. Christians might think that Daniel was having a good time steering politics, but remember this is the time when Psalm 137 was written (warning for graphic violence if you go look it up).

Also, even after the Babylonians, when the Persians allowed Jews to go back to Judah, those who did go back still had a really rough ride (hence Nehemiah’s distress at the beginning of his book). These were times when Jewish cultural identity was under severe threat.

As such, it’s not a fair comparison to draw parallels with the modern Western church.

My other objection to the strong emphasis on Daniel as a model for non-conformity is quite simply this: there are other ways of witnessing in the world.

There’s a strong case for saying that Esther was written as a direct political challenge to the post-exilic movement of Ezra and Nehemiah. Yes, Esther is set before their time, but it was most likely written after – and intended to speak to that later generation.[1]

This means that, at a time when Jewish cultural identity was being preserved through segregation and distinctiveness (e.g. building walls around Jerusalem, strict observance of the Sabbath, dissolving of interracial marriages), Esther was a striking example of acculturation.

This cannot be overstated.

Esther’s ability to act and present as a Persian queen was the vehicle for Jewish deliverance. What’s more, the book doesn’t end with Esther and Mordecai going back to the recognised Jewish ways to doing things; they stay in Persia.

We have to appreciate that the author of Esther wanted to show that those outside the accepted markers of Judaism were still part of Judaism. When we realise that, the ending of the book comes as no surprise. Mordecai is hailed as a great leader because he speaks for all Jews, everywhere.

In other words, acculturating Jews were still Jews.

So why does the church make such a big thing about Daniel?

I can think of several reasons.

First, everyone loves a good story. It’s much easier to say, “We need to stand out – like Daniel” than it is to say “We need to do what Paul said in one of his letters, I forget which one – was it Romans? It was about not conforming to the rest of the world. Or something.”

Second, I think we under-appreciate the violence of the exile. Bear in mind, Shadrach, Meshach and Abednego had their Hebrew names were taken from them. Their Babylonian names mean “servant of Aku”, “I have become weak” and “servant of Nebo.”[2] In other words, the oppression of this system utterly eclipses the struggles of many modern Western Christians (especially white, middle-class ones).

Third, we under-appreciate the book of Esther. We lap up the drama but we’re illiterate as to when it falls in history and how to read between the lines. If you haven’t read my review of “Esther in Ancient Jewish Thought” by Aaron Koller, I invite you to. I’ll bet you’ll learn something new.

And then there’s what I think is possibly the biggest reason: our theology of hope is lacking.

I’ll unpack that in the next post, but meanwhile I’ll leave you with a challenge. When you hear anyone preach about being a living witness in the world, note which Bible examples they use. See what proportion of these refer to the book of Daniel. Then ask yourself whether (a) the comparison is contextually proportionate, and (b) whether acculturation could be a route for being a living witness.

[1] See Esther in Ancient Jewish Thought by Aaron Koller (2014: Cambridge University Press) (I looked for the page reference where Koller talks about the language etc but… yeah, couldn’t find it easily. I’ll probably come back and fill in the gap later.)