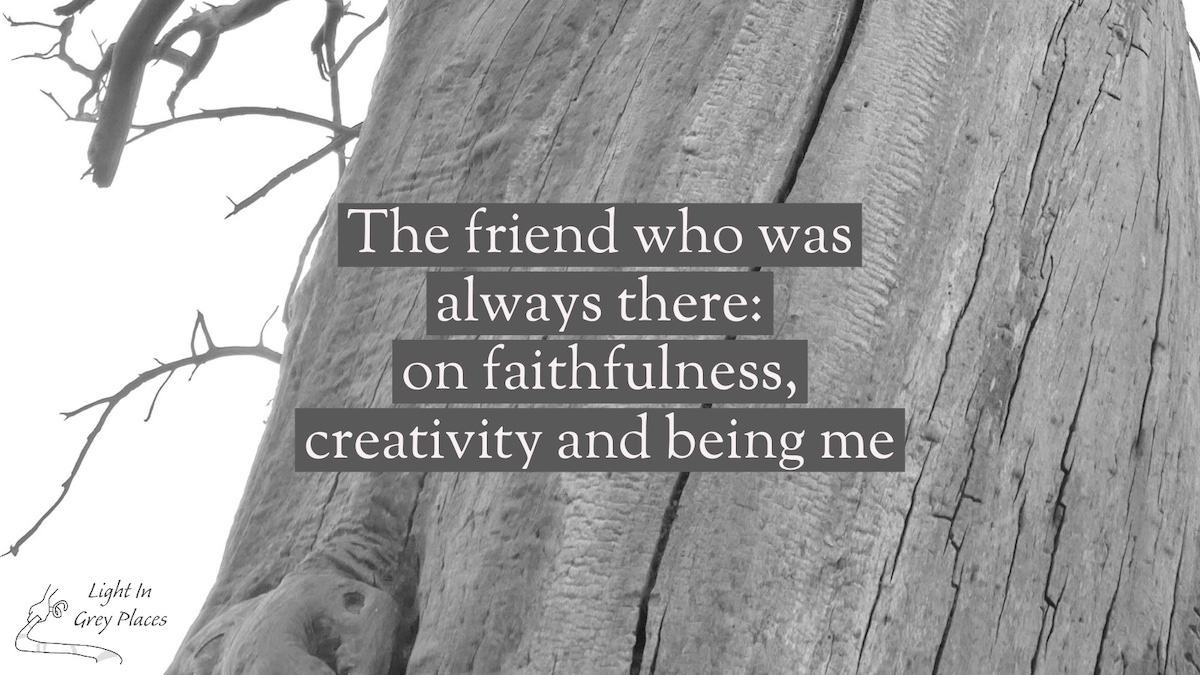 I grew up in a Christian background and, sometime when I was six, I put myself in my mother’s lap and said that I wanted to become a Christian. I then prayed a prayer, got up and carried on.

So far as I remember, it wasn’t a choice motivated by fear. It was just a choice. And through all the years that followed I had a general awareness and sense that, yes there was a God, and yes, that God was probably Jesus.

And every now and then, I’d have a moment when I was certain the Holy Spirit had even spoken to me. It was like the words were suddenly there in my mind, as clearly as if someone had spoken them out loud just a moment before – except that there hadn’t been any sound. Each time, it felt like the thought wasn’t my own because it was a statement I would never had thought to think. And each time, the words were simple, gentle, and truthful.

Yes, I believed God was real. That the God of Abraham, Isaac and Jacob was real. That the God revealed through Jesus was real. It didn’t surprise me that God spoke to me – why wouldn’t he? He’s a person (or three) after all. Sometimes I was frustrated when I had requests he didn’t give me a straight answer to, and it certainly distressed me in the brief periods of my life when I have been unable to pray. But I knew he was there and I didn’t live in dread of him.

Even so, in all that time, I now wonder if I knew what he was really like.

In 2013, I wrote a poem; it was written at a time when I felt particularly estranged from a friend. But I wrote it, shed a few tears and buried it in my computer’s hard drive.

I called it “Graveyard poem”. I wasn’t trying to say anything in particular it, I wanted to capture the aridity of a certain mood that comes when all tears are spent. It’s one I associate with dustiness and possibly the closest I’ve seen to it is portrayed in Terminator 2: Judgement Day when Sarah Conner carves the words “NO FATE” into a wooden picnic table.

I have a graveyard of wishes and dreams.
I have a memorial of times now past.
My hopes and desires have withered there
They stand dry like a fossilised tree.

My voice is taken from me.
I cannot call. I cannot cry.
The wind howls and bites, but has no speech
No words, no news, no message.

This empty courtyard paved with stone
Here I am left with thoughts alone
Until my fears are ash and bone
Under the mallorn tree.

Just over a year ago, I found it again. I edited it and then put the words to a picture I had taken in the Summer of 2015.

And there it was: a lament, written for when there are no tears left. When barrenness has overtaken and everything is dry. I thought of the desolate world of Charn in The Magician’s Nephew. I thought of the courtyard at Minas Tirith in The Return of the King and the mallorn tree that stood there without leaf or flower. And I thought of resurrection and the defeat of death.

I set the words against the trunk of a huge dead tree that stands at Hougemont, no doubt killed by the rounds of shot fired during the battle of Waterloo. I played with the colours of the image so that it seemed to be at dusk. And I really enjoyed doing this. (Click on the image for full size.)

I thought I was done. But then as I looked at my creation, the simple, gentle, truthful voice came to me: “But the Tree of Gondor was a white tree.”

Of course it was. And it wasn’t a mallorn tree at all.

I think it was in that discovery that it began to dawn on me that maybe God was someone who I barely knew, even though he’d been a very significant and felt presence in my life up to that point. This person was … how to describe it? More real. Gentler and kinder than I’d ever given God credit for. Someone who didn’t want to hold the monopoly on good ideas. Someone who had flare and vibrancy and yet was fully aware of reality.

God was someone who wanted to spend time with me, not because it was his parental or godly duty, but because he enjoyed it. God enjoyed being with me. God enjoyed my creativity, even when I was writing a poem that started in a graveyard with the mood of Terminator 2.

Since I made this picture and those words came to me, I feel like I’ve discovered more and more that the person who I’m even now just beginning to know, was always there.

He was there when I overtook a lorry on a short stretch of road. If anything had been coming in the opposite direction, I have little doubt that I’d have died and taken someone else with me. But in the moment I felt the presence of God like I have never done before or since.

He was there when I when I ranted that I was fed up with how my church went on and on and on about Jesus this and Jesus that, because hey – Jesus isn’t the be all and end all! The simple, gentle, truthful voice gave a polite cough and asked, “So, what do you understand by ‘I am the Alpha and the Omega’?”

He was there when I used to sing to myself. And he was grieved when the pressures of work meant that I stopped. I know because I once asked him how he felt about it and suddenly I knew more grief than I’ve ever felt for a person. Yet that was what he lavished just on my singing.

And, strangely, knowing that God was always there casts out fear.

I don’t know what the future will hold. But I’m not nearly as anxious as I used to be. I know that I am but one person amongst many, but I don’t feel small either. And I know my works will never be perfect, but now I don’t need them to be. I don’t even need them to be acknowledged, even if I would like them to be.

Rather, I’m happy just to be me and explore how I can be creative in small things or big things, alone or with others. What’s more, I enjoy seeing others’ creativity and variability without begrudging them or wishing to be them.

But maybe, just maybe, it’s what we were made for.