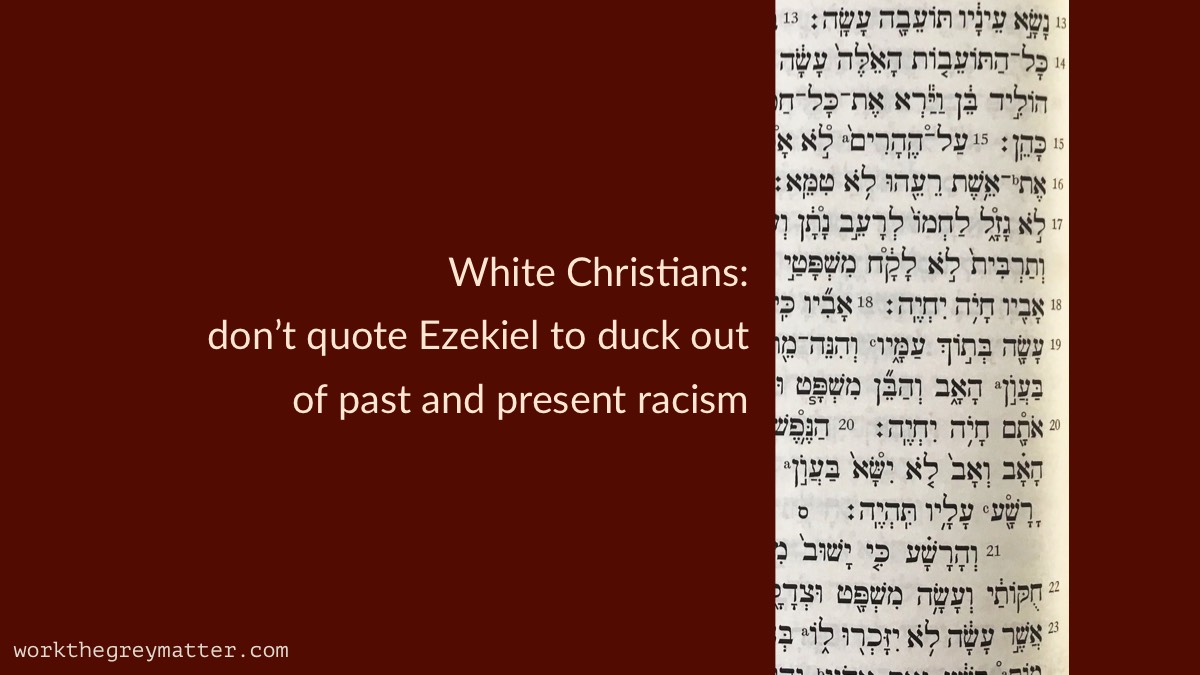 So, I saw someone asking why white Christians were repenting of the sins their ancestors committed against people of colour.

And I want to write about this.

Caveats: I’m mainly going to talk to how I understand the Old Testament, because the Old Testament was being quoted and it’s something I’m familiar with as a Christian. But just because I’m taking this angle, that doesn’t mean it’s the most relevant or comprehensive angle; I just want to demonstrate how this particular argument doesn’t stack up.

In short, the argument was this: if we’re all responsible for what we do ourselves, not what other people do, then white people shouldn’t have to apologise for the racism of other white people. See, for example, the principle of individual responsibility promoted in Ezekiel 18:19-20.

However, I think this fails to appreciate the context of Ezekiel and the attitudes the book was responding to.

So let’s dive in.

Content warning, this gets political and I mention an Old Testament clobber passage. Also, I don’t have space here to get into why bad things happen and people suffer; Ezekiel clearly had a concept of divine retribution and I’m going to roll with that worldview for now, because it was also implicit in the Tweet I read.

The verses quoted were these:

It comes mid-way through the chapter, just after God (via Ezekiel) gives a thick speech about how:

The people Ezekiel was speaking to clearly had issue with this. In their view, a righteous son should bear the guilt of his wicked father and the people called God unjust for saying otherwise.

But why were they saying this?

Actually, let’s step back further: who was Ezekiel speaking to?

Ezekiel was a prophet from the southern kingdom of Judah and we know about him from events during the reigns of the last two kings of Judah: Jehoiachin and Zedekiah. Around that time Babylon was the super-power, having taken over Assyria. When Jehoiachin rebelled against Babylon, he and Jerusalem were exiled (2 Kings 24:10-16) and Ezekiel was included in this group (Ezekiel 1:1-3).

After that, Zedekiah ruled for eleven years in Jerusalem; the book of Ezekiel was written during his reign (not that Ezekiel ever refers to him as a king). What’s more, a large chunk of what Ezekiel writes (including chapter 18) was directed towards those still living in Judah and Jerusalem.

In other words: Ezekiel, someone who’d just been exiled, was writing to people who hadn’t been exiled.

And everyone who’d just been exiled was listening in.

Ezekiel’s message was this:

In other words, Ezekiel’s message was two-fold: both a challenge and a comfort. It urged people not to be complacent about doing the right thing and that message was mainly for the people in Judah. But it also said that individuals (whether exiled or about-to-be exiled) had at least some ability to steer their fate.

(In case you forgot, Daniel did rather well for himself and died at a ripe old age.)

But why was the exile happening at all?

Oh… I suppose I do have to talk about why bad things happen. Obviously, there are historical and political reasons why Babylon wanted to throw their weight around, but so far as the authors of the Bible were concerned, the exile was a judgement from God. Cause: idolatry and oppression of the poor.

According to Ezekiel, Judah did these things worse than Sodom and Gomorrah (that would be the city in Genesis 19, that’s recorded as being destroyed in an act divine judgement).

Now, those of you more familiar with Genesis 19 might be thinking that sin of Sodom and Gomorrah was, well, sodomy. But the thing is, the Bible doesn’t say that. It says their sin was oppression of the poor.

Take, for example, Ezekiel 16:48-49 (emphasis mine, and remember, these verses address Judah and Jerusalem):

48 As I live,” says the Lord God, “Sodom, your sister and her daughters have not done as you and your daughters have done. 49 Behold, this was the sin of your sister Sodom: she and her daughters (outlying cities) had arrogance, abundant food, and careless ease, but she did not help the poor and needy. … 51 Furthermore, Samaria did not commit half of your sins, but you have greatly increased your repulsive acts more than they. So you have made your [wicked] sisters [Samaria and Sodom] appear righteous and justified by [comparison to] all the disgusting things which you have done. (AMP)

And if you’re wondering what kinds of oppressive things the people in Judah and Jerusalem might have been doing, let me offer you the example of Jeremiah 34:8-18. Jeremiah was a contemporary of Ezekiel and he was still in Jerusalem for Zedekiah’s reign. During that time, all the rich people promised to free their slaves. But then didn’t.

My point here is this: a major part of Judah’s sin was oppression of the poor.

And when Ezekiel promoted individual responsibility, he was warning people against continued oppression of the poor.

However, are we to believe that every single individual in Judah deserved judgement?

And that’s the point.

The individual and the collective

When the collective around you demonstrates that they don’t care about justice, individual responsibility is the only thing you have left.

Ezekiel was written in a time when Judah’s collective guilt was so great that a reckoning was unavoidable. There was no scope for “If my people who are called by name will humble themselves and pray…” The time for that had already come and been wasted. Even in their final days the people of Judah were demonstrating (as seen in Jeremiah) that they cared about money over people.

But into that context Ezekiel spoke, saying that God sees what the individual does and notices it.

If you ask me, this message doesn’t explain suffering, but it’s still a massive comfort. Because it opens up a glimmer of hope into a situation that is beyond an individual’s ability to change.

But all this is a world away from a situation where people apologise for the sins of their forefathers.

When white Christians repent of the sins their ancestors committed against people of colour, what they’re doing is an inherently collective act. A gesture of repentance might be made by a small group of people in a short space of time, but they represent a much larger group of people over a much longer period of time.

So, it’s not that white people are trying to take on individual sins that they didn’t commit. Rather, they’re:

Now of course, gestures are worse than empty when they’re not followed up with transformative action.

But my point is, Ezekiel’s message of individual responsibility was spoken to a time when the collective consensus was so obstinate, they wouldn’t have contemplated any of the above.

And given that Ezekiel’s concern was focussed around justice for the poor, it feels perverse to use his words to criticise groups of people who are trying to change things for the better.

I appreciate that it’s very easy to cause harm by attributing causes to the bad things that happen in the world. But I also believe it’s irresponsible to look at current events and say that they’re happening without cause.

Much of what’s happening in the US right now is the product of longstanding systemic racism and greed. And I think even my atheist friends would agree with me on that. For myself, I don’t think God is causing the bad things that are happening, though I find it eerie to consider how events have unravelled over the last few years. It seems one hypocrisy has been exposed after another, and another, and I struggle to not believe that God is at work in that.

When he spoke to people who thought they were righteous, he was speaking to the people in positions of power, warning them not to be confident but instead to stop oppressing the poor. Today, that message seems pertinent for people in the US who see themselves as part of a ‘Christian nation’.

If you want to read up on why I think this, here are a few links to get you started:

Meanwhile, Ezekiel’s message about people who do the right thing, regardless of what their parents did… well that’s what people need to hear when they have relatives who say, “I’m not racist but…”

As for the question of apology and reparations, all I can say is that apology alone is not enough. In 2009, the US Senate apologised for slavery, but it lacked any agreed action and even contained legal disclaimers. And, well, look where things are today.

Gestures can have immense power; on their own they are never enough, but they can begin something new.

So, going back to that tweet, if we see people who are willing to make a gesture in the here and now, whether great or small, our response shouldn’t be “this wasn’t your sin to repent of.”

Instead it should be, “OK – and now are you willing to follow through with transformative action?” Because that’s when we’ll see how much the gesture was worth.

14 What is the benefit, my fellow believers, if someone claims to have faith but has no [good] works [as evidence]? Can that [kind of] faith save him?
– James 2:14

“Do I take any pleasure in the death of the wicked,” says the Lord God, “rather than that he should turn [away] from his [malevolent] acts and live?”
– Ezekiel 18:23 (AMP)

If you’re interested in further reading on reparations here are few links to get you started: