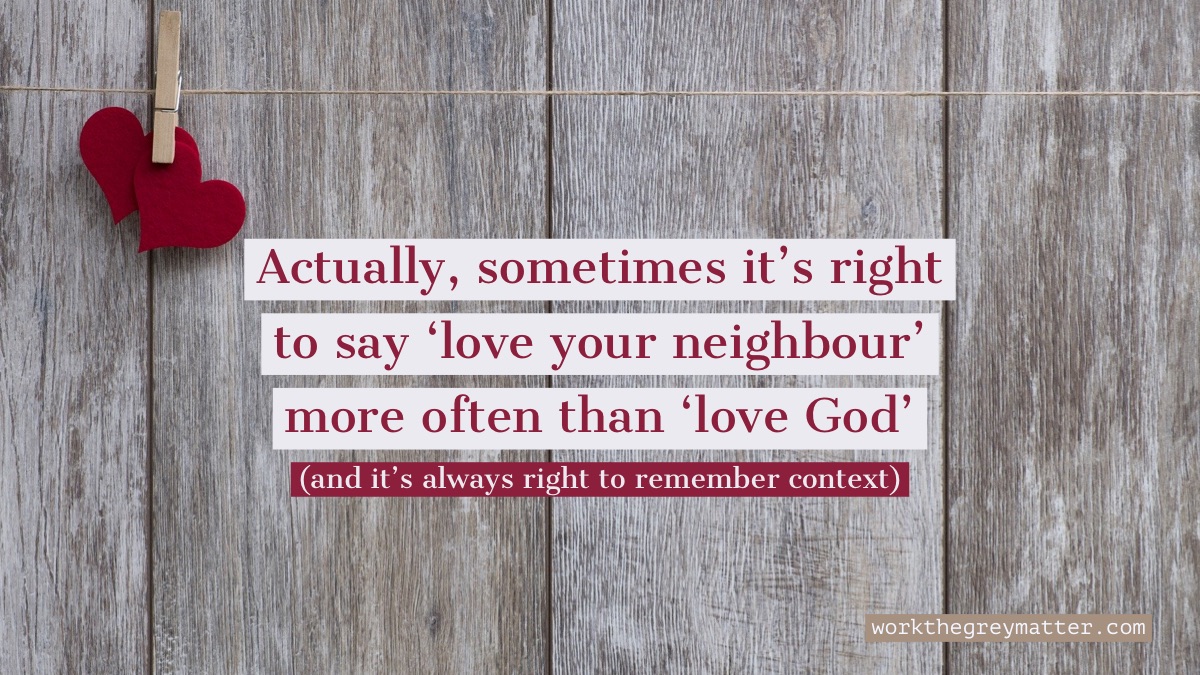 OK, so I know that deconstructing bad tweets on Christian Twitter is often a soul-destroying sport, but hey – this one overlapped with the subject matter of a book I’ve just started reading, so…

“The most pervasive — and pernicious — false teaching of our day is that “love your neighbor” is the greatest commandment in the law.”

It was written by a Southern Baptist pastor in the US who later doubled-down with a looooonnnng thread about the law and what Jesus meant when he talked about the two greatest commandments. (For those less familiar: these two commandments are (1) to love God and (2) to love your neighbour.)

If you’re wondering why I’ve given no direct links, that’s because a couple of weeks later he followed up with another tweet (which I didn’t see but was screencapped) about the Old Testament law and slavery. When that thread blew up he deleted his entire timeline. He then said people should be able to ask questions and acknowledged that his thread had caused hurt, but did little more.

I’m not interested trolling a particular person, but I do care deeply about how Christians understand the Old Testament and apply it in their everyday lives. Because that application – for good or for bad – can have far-reaching consequences.

OK, let’s talk about this.

(feel free to skip to the next heading, if you already know this)

Christianity started as an offshoot of Judaism and it inherited the Hebrew Bible (aka the Old Testament) as part of its sacred text. The first five books of the Hebrew Bible are called the books of law. They contain more than just laws, but still there are a lot of these – 613 (so I’m told, not that I’ve counted).

Observing the law, debating it and reinterpreting it for the time, was a big deal throughout the history of Judaism, including during the time of Jesus (first century AD). By this time, the books of law had been canonised as a sacred Jewish text, along with other books of the Old Testament that get referred to as “the writings” and “the prophets”.

Now, Matthew’s gospel records a debate that Jesus had with Jewish religious leaders; it’s in chapter 22, verses 34-40. If you’re not familiar with the gospels, they’re the first few books of the New Testament (which is a Christian sacred text, but not a Jewish one) and they record many of the events and sayings of Jesus.

During the debate, Jesus was asked what the greatest commandment in the law (as in, the books of law) was. He answered by quoting Deuteronomy 6:5, which is all about loving God with all your heart, mind, soul and strength.

But he didn’t leave his answer at that. He then said that the second greatest commandment was like it; he then quoted Leviticus 19:18 saying “Love your neighbour as yourself.”

So, now you know what the original tweet was referring to.

This pastor complained that Christians today say that “love your neighbour” is the greatest commandment. Unsurprisingly, he got a heap of pushback, because Christians aren’t actually saying this.

Like seriously, no Christian goes around saying your neighbour is more important than God. They might say, for example, that giving practical help to people you encounter is more important than going to church (a sentiment eerily reminiscent of a certain parable Jesus told), but people who claim to care about what Jesus said (as in, Christians) don’t turn around and say Jesus was flat wrong.

As it so happens, he tweeter later clarified what he had meant:

First off, let’s be clear: yes, I believe that to love God is the greatest commandment and to love your neighbour as yourself is the second greatest. (Caveats: Deuteronomy 6:4 is pretty darn important too and I don’t like separating it from 6:5.)

Atheists might be, but if Christians are going to debate whether something is a “pervasive and pernicious false teaching,” they should be talking about a teaching within the Christian community.

And no, Christians aren’t going around saying the second greatest commandment is actually the greatest. Seriously, they’re not. Neither are they arguing the two commandments are equal. Well, maybe some are somewhere, but this isn’t a “pervasive” idea going around.

The tweet bothered me, because if you’re going to say that something is the most pervasive and pernicious teaching going around in Christian circles, then you’ve got specific examples in mind. The tweeter didn’t say what his examples were, but he did say that love shouldn’t be defined outside God’s law.

Question is: what is “outside God’s law”?

Because there are plenty of Christians out there who would use that label to describe women in positions of church leadership (preaching and teaching), LGBTQ+ relationships and identities, and/or resistance against political authorities (including Trump).

Whether he realised it or not, the tweet carried overtones of saying that these ideas are the most pervasive and pernicious teachings going around. By extension, those who want to stand up for “God’s law” are emboldened to take a harder line when it comes to their neighbour.

And that’s one nasty slippery slope.

The problem of loving our neighbours

In fairness, he admitted that we have a problem with loving our neighbours. But he then continued with a “but” and argued that we can only love our neighbours if we love God.

And I really don’t get this.

For one thing, when I read 1 John 4:20 (which he quoted) it strikes me that John is says it the other way around: we cannot love God if we do not love our neighbour.

That would be the slippery slope I referred to earlier.

My thoughts were well encapsulated in these two tweets:

The most pervasive false teaching today is the same false teaching that was pervasive in 30 AD, that you can love God with all your heart, soul, and mind without loving your neighbor as yourself. Cause and effect go together. @marcusbirch23

And this one (bold mine):

I think there’s a case for saying that if we want to measure and evidence our love for God or for our neighbour, that’s often better done with reference to our neighbour. Because they are right in front of you and have voices you can’t say you didn’t hear.

This is what I think this pastor kept missing (and hence my tweet at the time).

At the end of the day, debates don’t happen in a vacuum. If a Christian is banging the drum for one of the two greatest commandments, but not the other, it’s because they’re responding to something they’re seeing in practice.

If we want to comment on the wisdom of what they’re saying, we should darn well understand what it is that they’re seeing.

Remember, Jesus said the two greatest commandments sum up the law, the writings and the prophets – but these texts cover a pretty diverse range of circumstances and provide a number of perspectives on God. Similarly, when people pull out “love your neighbour” it could be in response to any number of circumstances.

So if we’re going to try and comment on that, we have to bear in mind that these are likely to be emotionally charged situations, that are even traumatic for some people. Not everyone will have had the chance to carefully articulate their thoughts, but that doesn’t mean they’re wrong or that they don’t have a point.

If someone retreats to a familiar phrase, maybe that’s because their thinking is scrambled in the moment; but we shouldn’t assume they’re trying to collapse complexity, or replace wisdom with slogans.

A gracious response is one that inquires, listens, and works carefully to find more incisive words.

I love the Old Testament law, but that doesn’t put it beyond debate. On the contrary, I believe searching out its wisdom is one of the church’s great callings. Whatever we understand to be God’s ‘law’, Christians must recognise that how we live it out in practice is felt by other people. Whether those people cherish the law, the Bible, or the sayings of Jesus, or whether they don’t, they have voices that should inform and give nuance to whatever discussion we have.

Otherwise, the church is just a closed system, incapable of growing and ineffectual at transformation. At least, that’s how I interpret it.

Whatever we understand to be God's 'law', Christians must recognise that how we live it out in practice is felt by other people. Click To Tweet