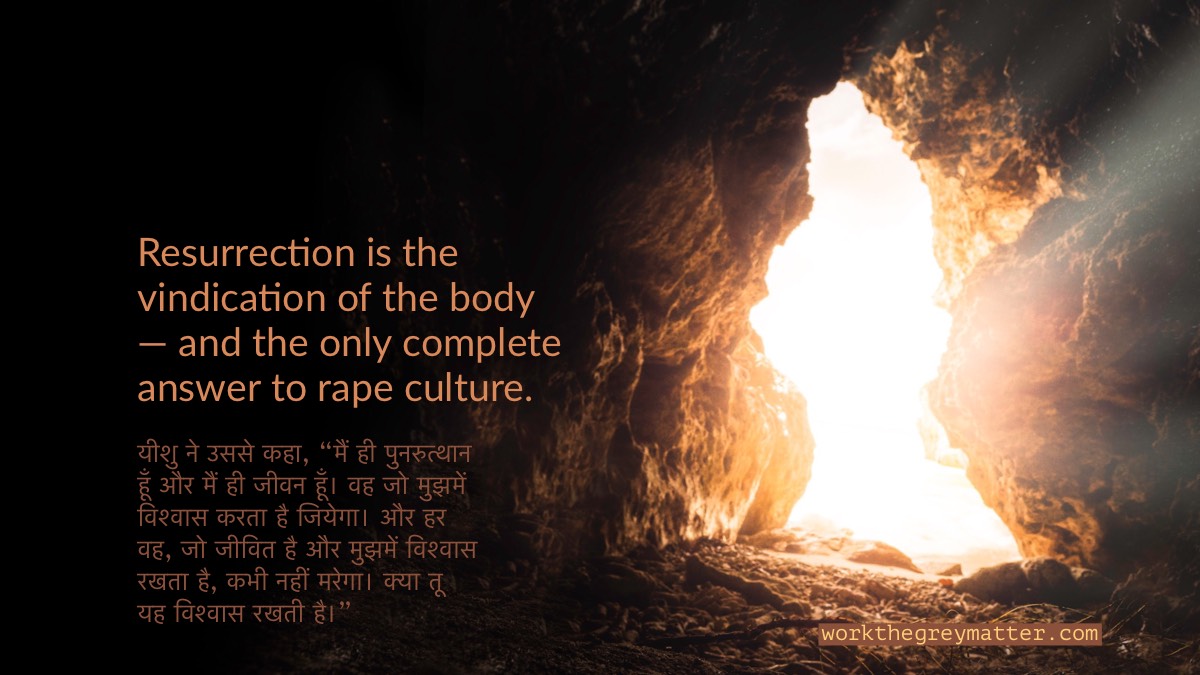 Content note: I debated whether I should categorise this post as ‘sunlight’ or ‘moonlight’. On the one hand, its message is unashamedly positive and it speaks about the core of Christian hope — resurrection. On the other hand, it also talks about an extremely violent event that resulted in a woman’s death. I’ve decided to go with ‘sunlight’ on the grounds because this is ‘hope worth sharing’ and, to the extent that I talk about suffering, I do in the same way as I would talk about Jesus’s passion on the cross.

However, please be advised that I describe in broad terms what happened, and I allude to some of the horrific details, though more specific discussion has warnings telling the reader when they may want to skip ahead.

A few years ago I watched a documentary called India’s Daughter (now available to rent or buy on YouTube). It was about Jyoti Singh, a 23 year-old Indian medical student who said that to be a doctor was the highest calling you could have in life.

If you’ve heard of her, you may know her as ‘Nirbhaya’, which means ‘fearless’. Or you may only know of her as the victim of the 2012 Delhi bus rape and murder.

The documentary I saw was powerful and hard-hitting, laying out the horror of both the assault and the ideologies that made it possible.

But when I came away there was one thing I was convinced of more than anything else: hers is a story that will end in resurrection.

Today I want to explain a little about why I believe that, and why the vindication of the body is such an important message for rape survivors everywhere.

The word ‘resurrection’ derives from the Latin ‘surrexit’ meaning, ‘to get up’. Resurrection is about getting up again – except that it’s much more than that too.

It’s not a zombie-like walking-dead existence, it’s about the fullest life and, importantly, it’s about an embodied life. Many Western concepts of ‘life after death’ centre around the idea of a disembodied or pure-spirit existence. And there’s some space for that idea in Judeo-Christian thought, but it’s not what resurrection is. Resurrection is flesh-and-blood, tangible bodies living like they’ve never lived before.

There are reasons why resurrection has been wildly misunderstood by the Western church, but this post isn’t about that so I’ll leave it there for now (resource links are further down). Meanwhile, Jesus’s resurrection is a very big deal to Christians for one obvious and historically-proven reason, if nothing else: Jesus died.

Resurrection is triumph over an unjust death

Jesus was crucified under Pontius Pilate. It was the most ignoble, humiliating and tortuous execution method the Romans could devise, designed to obliterate any possibility that a person might put their hope in Jesus.

And let’s be real: Christians would struggle to believe that Jesus is the hope and redeemer of humankind if his story had ended at the cross. No legacy of being a ‘good teacher’, no amount of being welcomed by angels into heaven, would be enough to compensate for the fact that, without resurrection, Jesus was defeated by death just as much as the rest of us.

Christians are sometimes so familiar with the cross as a symbol of victory that we forget what made that association possible. But make no mistake: it was resurrection.

So how does this relate to Jyoti Singh?

The physical horror of Jyoti’s death

Jyoti Singh was a 23-year-old who’d just passed her medical exams in Delhi. She went to the cinema with her boyfriend and at about 9pm they caught what they thought was a normal a bus home. But it was a trap: on board there was a gang of five men and one boy on board. They brutally assaulted Jyoti and her boyfriend and she died from internal injuries two weeks later.

When I watched the documentary, an Old Testament poem kept going through my head.

It’s called the Song of the Suffering Servant and it’s in Isaiah chapters 52:13-53:12. As its name suggests, it’s all about how God’s chosen servant suffers brutally, even though he’s innocent.

Now, there are various ways you can interpret this passage. Being a piece of Jewish literature, it should go without saying that many Jews don’t interpret it as being about Jesus. That said, I do interpret it as being about Jesus; moreover, I believe its aching poignancy has a depth and strength capable of carrying the pain and injustice of what Jesus went through when he was crucified.

This ancient prophetic poem was the only place where I could I find words that captured Jyoti’s innocence and her suffering. Sure, when you look at the detail, the words of the suffering servant don’t entirely fit with Jyoti’s circumstances. But the emotional core and the sense of injustice fit.

The phrase that particularly stayed with me was one from Isaiah 52:14:

“His face was so disfigured he seemed hardly human, and from his appearance, one would scarcely know he was a man.” (NLT)

And as I considered how the suffering servant, Jesus, was vindicated in his resurrection, I began to wonder what resurrection would mean for Jyoti. It would mean the restoration of her disfigured body.

But it would mean much more than that too.

The ideological horror of Jyoti’s death

The crime against Jyoti wasn’t just in how her assailants raped and assaulted her. It was also in how they said again and again that she deserved what she got, that what they did wasn’t so bad, that they shouldn’t be punished for it.

It was also in how the assailants’ lawyers said that she – and indeed all women – deserved the violence that men meted out against them.

CONTENT WARNING: This section cites some of the very violent things spoken by one of her assailants and the defence lawyers. If you don’t want to read it, just skip to the next heading.

Mukesh Singh, one of her attackers, said, “A girl is far more responsible for rape than a boy. A decent girl won’t roam around at 9 o’clock at night … Housework and housekeeping is for girls, not roaming in discos and bars at night doing wrong things, wearing wrong clothes.”

He also said she wouldn’t have died if she hadn’t fought back.

One defence lawyer Manohar Lal Sharma said: “We have the best culture. In our culture there is no place for a woman.”

The other lawyer, AP Singh, said, “If my daughter disgraced herself,” which in this context means going to a movie as Jyoti did, “I would take her to my farmhouse, and in front of my whole family, I would pour petrol on her and set her alight.”

When I heard the violent and unjust things these men were saying, when I saw how bold they were, how willingly and persistently they were prepared to fight their case in court, I realised that Jyoti’s resurrection would not just restore her body, it would silence her accusers.

If God raises her up on the last day, and she stands in front of them, whole and restored – there is nothing they will be able to say.

That’s the image I can’t shake.

It’s the only ending to her story that makes sense to me.

And it’s just the kind of thing I can imagine God doing.

Now sure, this image of a resurrected Jyoti standing in front of her accusers (or rather, them standing in front of her) has a whole heap of loose ends and unanswered theological questions about the end times and the end state. I should stress that I’m not trying to write systematic theology here and I’m not about to speculate as to the eternal fate of the six people accused.[1]

EDITED TO ADD: There are also a whole heap of unanswered questions about why suffering happens at all; however good resurrection may be, it’s not a reason for us to be complacent about injustice in the here and now. Also, we shouldn’t use the idea of resurrection to dismiss or diminish people’s suffering and we still need to exercise particular care before attempting to offer it as comfort. Resurrection is not an explanation for suffering; I wouldn’t even say it’s an answer to suffering. Rather it is something that answers suffering.

What I’m saying is this: resurrection is capable of answering the horror of Jyoti’s suffering and the ideology that fuelled it.

Probably if I’d thought about it, I could have articulated these things, but watching the documentary brought me to see them more clearly. And having seen it, I want this message of hope for the body to be told to women and rape survivors everywhere. Because this isn’t just for Jyoti – it’s for everyone.

Jesus is both crucified Christ and risen Lord. In him, we have the hope of a resurrection life. Whatever you might have heard or misheard or not heard about resurrection, today I offer you this: resurrection is nothing less than the complete redemption of the body.

It will end all injustice and violence against the body; it will silence all lies about the body; it will remove all discord within the body. It won’t pretend these things didn’t happen. Instead, somehow, it will bring a new life out of our scars and out of our death that we never imagined.

And the best part? It will last forever.

If you want to understand Christian thought on resurrection better, I’d recommend picking up 1 Corinthians 15 and a good commentary. Preferably one that draws on NT Wright’s and Paula Gooder’s insights on the subject, though Jürgen Moltmann also has amazing things to say on this subject.

[1] Of the six men accused: one was a juvenile (and has been released after three years in a correctional home), one allegedly took his life whilst in prison, and the remaining four have been executed. It was reading about their deaths that prompted me to finally get round to writing this post.