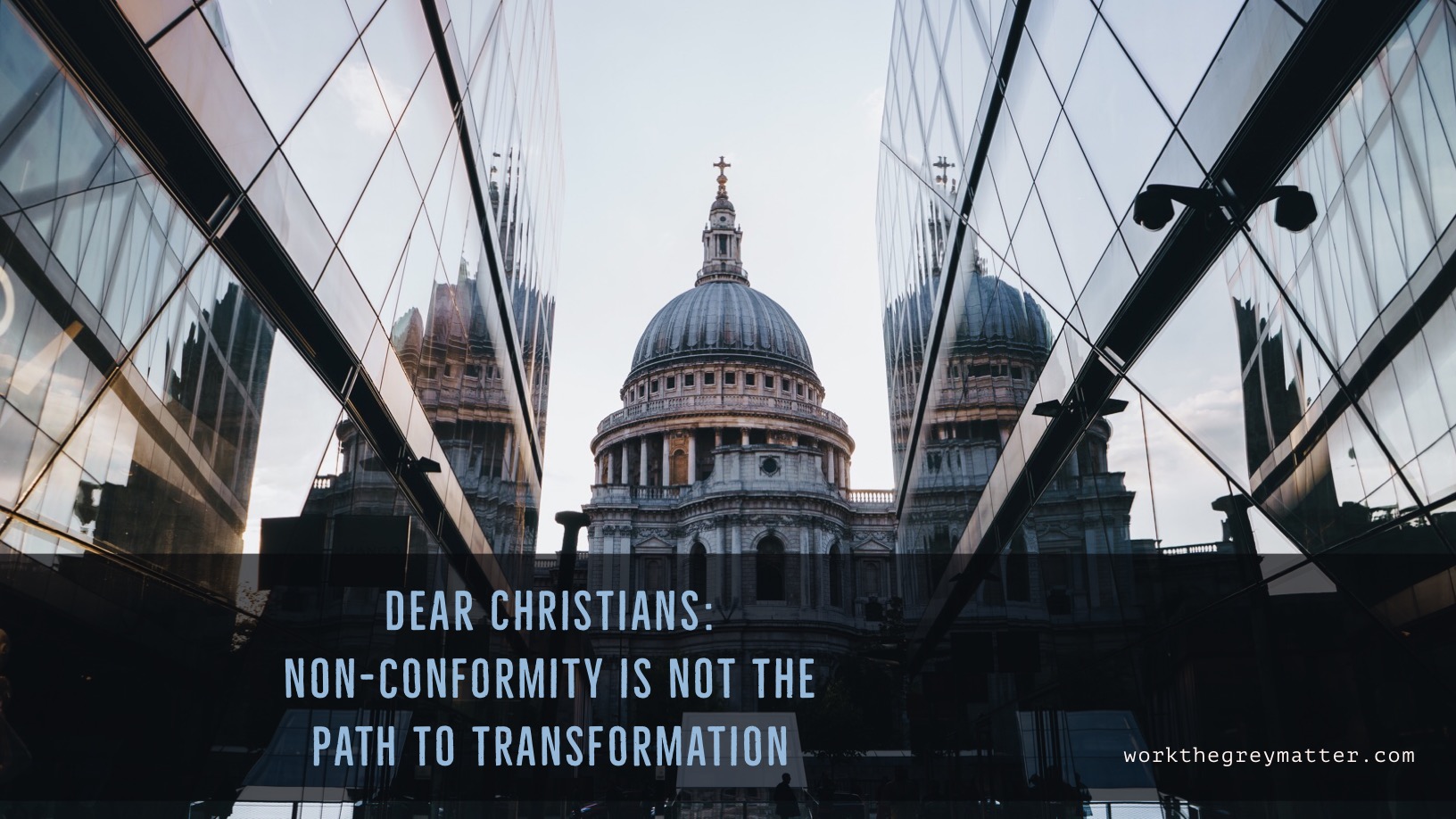 The book of Daniel often gets cited as the model for Christians to follow because he doesn’t acculturate, famously refusing the king’s food. The thing is, there are people other than Daniel in the Bible who did acculturate and brought God’s salvation and transformation into the world by doing so. (Esther and Joseph being the two leading examples.)

In my last post, I wrote about how the UK and US churches’ use of Daniel to promote non-conformity is problematic; in this post I want to dig deeper into assumptions that underpin our ‘Daniel-only’ models of church.

Because I reckon the overuse of non-conformity comes down to a flawed theology of hope.

If you believe that the world will substantially change only at the end of time as an outside work of God, then of course there’s nothing you’d want to accept about ‘the world’. If on the other hand, you believe that the kingdom of heaven – that is, the influence of God’s reign of peace – is coming into and positively changing the world even whilst we wait for God to come and complete the renewal of all creation… well, you’re going to see things differently.

Me? I’m firmly in the second camp. I reckon we’re not to conform to the world insofar as the world doesn’t reflect the values of the kingdom of heaven.

Now, many Christians would probably agree with that non-conformity is only appropriate when the world doesn’t exhibit the values of the kingdom of heaven. Our disagreements are around what those values are and whether certain practices are compatible with heaven.

But where does this disagreement come from? If we can all agree that conformity and non-conformity are context specific, why is the church so starkly divided that branches of it will repeatedly pull out the Daniel card, saying their way is the only way to be righteous?

Well here’s what I think one big reason is: the case for non-conformity assumes that those on the inside of God’s covenant promises are the exclusive pioneers for expanding heaven’s reach in the world.

To put this another way: the church preaches non-conformity because it believes that people outside the church must change if they’re to reflect heaven on earth. As such, whenever Christians pull the Daniel card and say “We are not one of you,” the implication is “You are not [yet] one of us.”

This alone raises all kinds of questions around conversionism and whether the church is following in Paul’s footsteps. After all, Paul became ‘all things to all peoples’, actively doing a reverse-Daniel by eating whatever was put in front of him. But I don’t have time to go into that now.

But here’s the thing: God includes people and works through people unexpectedly; sometimes, those who are outside the markers of Christendom, are the ones who teach the church about what church needs to become.

Esther as an example of radical inclusion

Let’s start by looking at Esther herself.[1] She was from the house of Saul (not David), voluntarily lived in Persia (not Judah), and even held a three-day fast clashing with Passover (Christians often miss this fact).[2] In other words, Esther was far outside the markers of a Jewish leader. But she was the one who saved the Jewish people on a scale comparable with Passover.

We should appreciate that the book of Esther was written after Ezra and Nehemiah, whose movement was characterised by stark cultural segregation.[3] Esther, on the other hand, embraces a foreign culture and cultivates a multi-faceted identity in which she describes both the Persian people and the Jewish people as her people.[4]

The impact of her acculturation narrative is hard to overstate.

For one thing, she stands in solidarity with the Jews who were not considered Yehudi by Ezra and Nehemiah. But not only that, it seems to me that she also opens the door for those far outside of Jewish heritage to participate within it.

I’m not just talking about all the people who convert to Judaism in the later chapters of the book. Rather, have you noticed how many named eunuchs there are in the book of Esther? (Answer: 10.)

According to Deuteronomy 23:1, such men were explicitly excluded from serving in the temple, even if they had priestly ancestry. But the book of Esther was written hot on the heels of the radically inclusive message of Isaiah 56:3-7,[5] where not only is God’s house proclaimed to be a house of prayer for all nations, but eunuchs are told that they will have a memorial within God’s temple.

It seems to me then, that although the author of Esther didn’t directly mention the temple[6] once (just as they don’t mention God, prayer, judgement, sin or Torah, for that matter), when they wrote about these eunuchs they were making a statement about inclusivity.

People outside God’s covenant promise are significant to the enactment of God’s faithfulness to his promise.

This goes way beyond just Esther

I’ve focussed on Esther as the example here because my personal theology was transformed after I learned more about that book.[7] But the idea is not new or unique to the book of Esther.

Meanwhile, people like Jethro, Rahab, Ruth and Naaman are all examples of people ostensibly outside of God’s covenant people, but who were counted as included on account of their faith.

And this is to say nothing of the stories of the book of Acts where the Holy Spirit was seen to be pouring out on the Gentiles – even the uncircumcised ones.

Therefore we cannot, we simply cannot say that the scope of God’s promise comes in a static shape and size.

Instead we need to appreciate that there is a mysterious reciprocity at the frontiers of the kingdom of heaven.

What I mean is, when heaven reaches into the world, it doesn’t just change the world to become more heaven-like. The kingdom of heaven also responds to those who look inside and respond in faith.

And when enough people do this (as happened with Gentiles in the early church) then we begin to recognise that the scope of God’s covenant promise has a reach further than we had thought.

OK, I appreciate that a lot of what I’ve written here is me extrapolating from key themes that recur in the Bible. This is not a rigorous theology thesis and I may not be 100% right (actually there are good odds of that).

But think about it.

Why should we imagine that the kingdom of heaven is like one massive tent, gradually filling up with people as history passes? Why can’t we imagine that the tent is growing and being shaped to accommodate people who weren’t previously able to shelter in it?

Or do mustard seeds come pre-grown?

I don’t mean to suggest that the scope of God’s promise started narrow and got bigger, as if it wasn’t big enough for some people who lived before a certain time. No, God is beyond time and his salvation stretches across all time.

However, the revelation of God’s love is something that happens in space-time. That means that the kingdom of heaven, as we know and experience it, will change over time. And in turn, our understanding of church will also change over time.

It seems to me that Christians with ‘Daniel-only’ models of church tend to be ones who resist change. “Do not conform to the world” is given as the reason to keep barriers up, to keep structures unyielding, to keep certain groups of people from becoming movers and shakers. It’s as if they believe their version of church is the church God designed, and to do anything else is to reject God.

Well, here’s the thing – I don’t think God designs so much as he creates, reveals and teaches. God may have established structures, institutions and groups of people at certain points in history, but I don’t believe his purpose was to have a particular social ordering. Instead, I believe his aim was to teach about his love.

Maybe that’s why his lessons all include exceptions to the rule.

And maybe that’s why, every now and then, he not only sets some things aside, but he also brings out things that had been off-limits and says, “This is OK for you to use now.”

I don’t believe that God changes. But I do believe he reveals himself not just to those who are at the margins and on the outside, but also through them.

Therefore, if the church’s theology of hope is to have any substance and lasting effect, we need to be wary of trotting out Daniel and saying “do not conform”, as if the dividing lines we draw up are somehow holier than society’s.

Instead, we must be willing to be changed by the people we seek to include. Only then can we be living witnesses to God’s hope.

[1] My source for a fair bit of what I’m about to say is Esther in Ancient Jewish Thought, by Aaron Koller (2014: Cambridge University Press)

[5] Koller, p24: The prophet did not claim that foreigners were like Israel in God’s eyes; he went further than that. God is more pluralistic: “my house welcomes all peoples.”

[6] King David calls the Jerusalem Temple a birah in 1 Chronicles 29. Throughout the Hebrew Bible only one other place is called a birah: The Fortress of Susa. (p100)

[7] By reading Esther in Ancient Jewish Thought! My book review is here.

[8] I only noticed this after reading a paper by René Lopez Israelite Covenants in the Light of Ancient Near Eastern Covenants (for a download click here).

One thought on “Dear Christians: non-conformity is not the path to transformation”