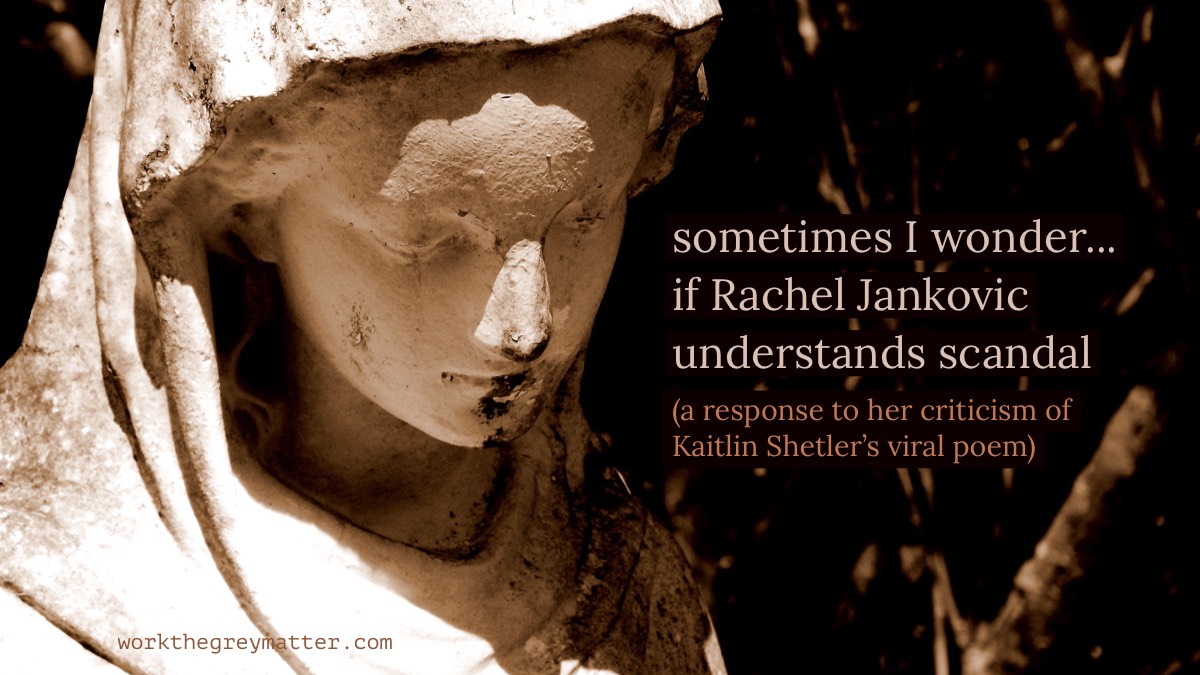 Over the last week or so, a #poemfortheresistance by Kaitlin Hardy Shetler has been making waves on the internet. Both stark and poignant, it contemplates whether Mary’s experience of breast-feeing Jesus was anything like the author’s earthy experience. (Its text is at the bottom of this post.)

The poem has many layers but it lands the author’s view that the coarse image of a teenage girl, with cracked nipples maybe, breast-feeding Jesus, says far more about the truth and relevance of the Christmas story than the many sermons you might hear from privileged male preachers who gate-keep women from the pulpit.

At the time I write, the poem has garnered over 40,000 reactions on Facebook and 29,000 shares (not counting the ones where people copied the text into their own posts). It’s clearly resonated with a lot of people, however it’s also been deemed silly or irrelevant by some, offensive to others.

In particular, Rachel Jankovic criticises the poem for misstating the scandal of Christmas as “some kind of woman power thing” when the real scandal (in her view) is obedience to God.

I want to talk about this.

In many ways Jankovic’s criticism is unsurprising. She advertises her recent book as being about obedience to God and she believes godly obedience means not pushing for women preachers.

But let’s take a step back — why talk about “the scandal of Christmas” at all? Why not the message or the good news of Christmas?

Scandal and the gospel

In case you hadn’t noticed, Christians believe the gospel is itself a scandal, in the sense that it causes offence. I grant you, this idea might seem counter-intuitive, or even manipulative — especially given how conversionist tactics abuse it (e.g. “Hey, I’ve got good news, but first I have to offend you…” or “Of course we’re preaching the truth — everyone hates us!”).

But the theme of the gospel as scandal is apparent throughout the New Testament (e.g. 1 Corinthians 1:22-24).

You see, the gospel is not generic, relativist good news; rather, it’s good news for the poor. So, for example, if you’re someone who oppresses the poor, then the gospel is offensive and bad news (at least until you recognise your need for repentance and forgiveness and do something about it).

So, going back to the poem, both Jankovic and Shetler agree that the gospel is a scandal, but they disagree on what the scandal is.

What is the gospel scandal today?

Jankovic argues that it’s Jesus’s victory over sin, his command that we follow him, and his ability as God to separate right from wrong. In her book, the gospel is offensive to people today because it requires obedience.

But I think she overstates her case. In my view, many modern people would see all these things about Jesus as good news: here’s someone who can save us from death and mortality, who you can rally behind with confidence, and who actually speaks sense.

What’s more, it’s unfair for Jankovic to imply that the poem misses all this. The poem clearly asserts Jesus’s divinity (and, by extension, authority and goodness). However, instead of saying these qualities of Jesus are the scandal, the poem links Jesus’s divinity with the fact that he lived with an acute lack of privilege, amongst people who lacked privilege. That, it says, is the scandal. Because it implies that we should hear the voices, stories and insights of the marginalised when the gospel is preached.

Per a comment on her Facebook page, Jankovic finds this notion “astonishing”. In her view, Jesus has already given his story in his own words in the Bible along with the command that only Christian men may exegete and preach it. (The post that Shetler wrote that Jankovic quotes from is this one on Facebook.)

However, amongst other things, I think Jankovic misses the point that preaching is not about giving the most faithful rendering of the text. Rather, it’s about presenting a truthful link between our world now and the messages recorded in the text, so as to enable people to deepen their relationship with God.

This doesn’t mean that our personal experiences and reflections are a substitute for the gospel accounts, or that it’s OK to de-centre Jesus from the story. What’s more, for a truthful link to be made, you typically need a good understanding of the text. However, it remains that our experiences are a gateway for people to hear and understand that those gospel stories are relevant to them, whoever they are, in the here and now.

It’s this concept that Shetler draws on in her poem, making the point that gate-keeping women from the pulpit necessarily hinders the church from sharing its hope.

But how can we discern whether Shetler is right? What if she’s taking inclusion too far? What if — as Jankovic alleges — she’s giving licence for people to get comfy with their sin, rather than rejecting it?

Here’s what Jankovic misses: godly obedience is never an end in itself. It has to achieve something good. And you judge an achievement by the fruit it bears.

So: what good thing comes of excluding women from the pulpit? Some argue that male leadership and female ‘submission’ somehow models deeper Trinitarian and ecclesiastical relationships, thus communicating a mystery to the world and bringing people to repentance.

However, the problems with this explanation are:

Therefore, it’s not hard to suspect this ‘good’ thing of being merely a rationalisation for male-controlled power structures.

On the flip side, if we look at the leadership and scholarship of people like Dame Sarah Mullally (Bishop of London), or Dr Paula Gooder (Canon Chancellor at St Paul’s Cathedral) — can anyone in all seriousness claim that their ministries leave destruction in their wake?

If you want to understand the scandal of the gospel, here’s what you need to remember:

So if we’re to talk about the scandal of the gospel, it’s not that every offensive idea carries truth (many are offensive because they demonstrate a disregard for God and his image in people). Neither should we expect everyone’s first reaction to the gospel to be offence (many simply receive it with joy and grow aware of the ways they need to change as they mature in faith).

Rather, when the gospel is a scandal, its challenge can be put simply: if you find the idea of a woman preaching offensive —

not because of her ability to speak, or her understanding of the Bible, or her awareness of today’s culture, or her sincerity of faith, but because of her biology, and if you invest yourself in barring women from the pulpit, and ridicule those who argue for equality, and say your efforts are for the sake of a ‘greater good’ whilst ignoring its demonstrable harm to God’s reputation

— then what does that say about you?

Also, there’s a YouTube video of Paula Gooder speaking about the cross as scandal at St Paul’s Cathedral in London (if you want, watch the whole video, but she starts on this topic at 26m 22s).

Kaitlin’s poem is below.

By Kaitlin Hardy Shetler
Originally posted on Facebook here, (edit: Shelter now has her own poetry Facebook page and you can find the poem here) reproduced with permission. [return to top]

sometimes I wonder
if Mary breastfed Jesus.
if she cried out when he bit her
or if she sobbed when he would not latch.

and sometimes I wonder
if this is all too vulgar
to ask in a church
full of men
without milk stains on their shirts
or coconut oil on their breasts
preaching from pulpits off limits to the Mother of God.

but then i think of feeding Jesus,
birthing Jesus,
the expulsion of blood
and smell of sweat,
the salt of a mother’s tears
onto the soft head of the Salt of the Earth,
feeling lonely
and tired
hungry
annoyed
overwhelmed
loving

and i think,
if the vulgarity of birth is not
honestly preached
by men who carry power but not burden,
who carry privilege but not labor,
who carry authority but not submission,
then it should not be preached at all.

because the real scandal of the Birth of God
lies in the cracked nipples of a
14 year old
and not in the sermons of ministers
who say women
are too delicate
to lead.