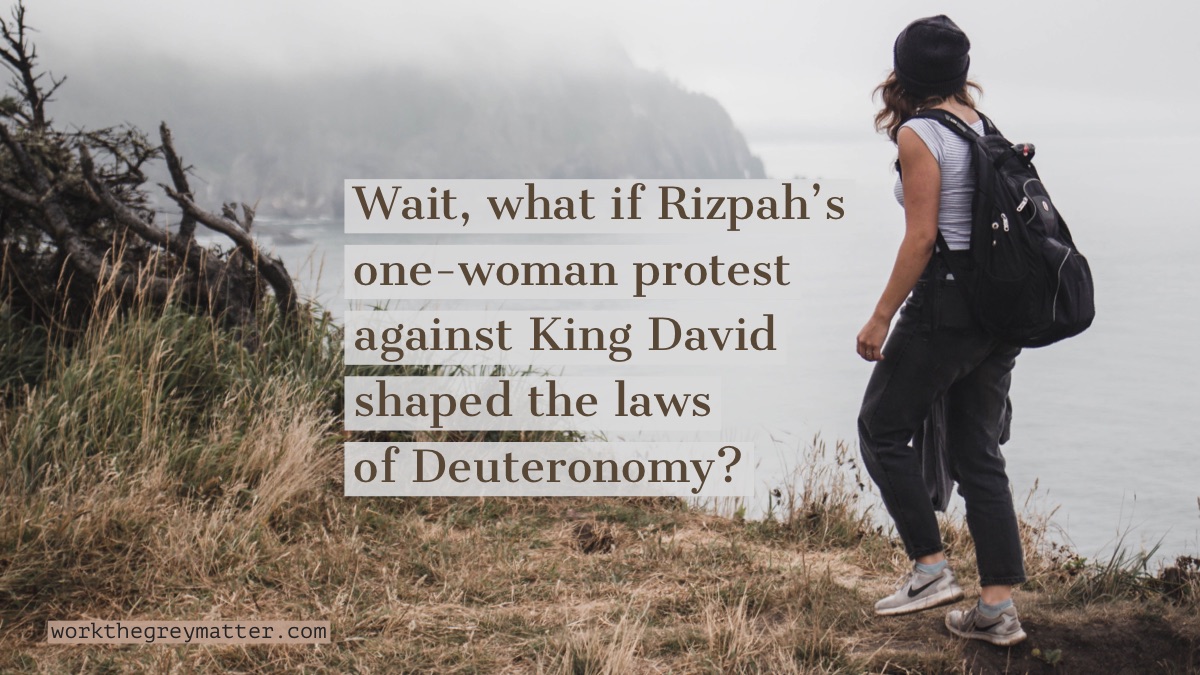 I was recently listening to a compelling sermon by Austin Channing Brown, that was all about Rizpah. If that name doesn’t ring a bell, she’s a woman in the Old Testament who undertook a months-long one-woman silent protest. Her actions eventually persuaded King David to bring an end to something which he had commanded. (If you want to hear the sermon, it’s on episode 2 of the Evolving Faith Podcast.)

Brown’s sermon focussed on speaking truth to power and she applied Rizpah’s story to racial justice today. But as I sat and thought through Rizpah’s actions, I realised they may have been much more far-reaching, even in her own time, than just changing David’s actions.

And while I’m yet to visit the library and validate my suspicions here, I’m now willing to bet that Rizpah’s protest changed the law.

Allow me to explain.

The backdrop is near the beginning of Israel’s monarchy; the first king, Saul, had died and his most talented soldier, David, had taken over.

While Saul was alive, he had grown paranoid about David and tried to kill him multiple times, despite David’s loyal service. As one might imagine, their two houses subsequently had frosty relations.

Rizpah, meanwhile, was a concubine of Saul and she had two sons.

We read about her in 2 Samuel chapter 21 because David ordered her sons (and five other direct male descendants of Saul) to be handed over to a neighbouring people, the Gibeonites, in order to be executed. The seven men (who would have been adults) were hanged on a hill and their bodies left there.

What makes David’s actions so problematic – even in the context of Old Testament times – is that these men hadn’t done anything to deserve such a fate. They were being executed in place of their father Saul, as vengeance for when Saul committed genocide against the Gibeonites.

Also, the men’s bodies – even though they were executed as criminals – should not have been left on public display; they should have been brought down before the first nightfall. But they weren’t.

Because of this, Rizpah went and sat on that hill for months, stopping the bodies from being eaten by carrion birds and animals — and word of her actions reached David. Then, when Autumn set in, David ordered the bones of the men to be given a proper burial with Saul’s remains.

Why did David allow these men to be killed?

One answer is to argue that David wasn’t actually a pleasant guy, but happy for any excuse to see his political rivals subdued even further. And… whilst I have reservations about that argument, it has some mileage: David was a politically savvy guy, who didn’t shy away from killing his enemies, and he absolutely did not always act ethically.

But there’s another angle too.

… not just because there was a famine and he believed that this would help end the famine (we can disagree – but that’s what he believed, see 2 Samuel 21:1),

… not just because Saul committed genocide and he believed the lives of seven men was a comparatively small price to pay to alleviate that bloodguilt (again, we can disagree – but that’s not the point),

… not just because this was what the Gibeonite survivors asked for and he wanted to honour their wishes as the wronged party,

…but also because it wasn’t against the law.

Those of you who know your Bibles might now pull out a couple of laws from Deuteronomy. After all, Deuteronomy is a book of law; its writings are attributed to Moses, who lived long before David’s time, and there are some verses that explicitly prohibit what David did.

If a man has committed a sin deserving of death, and he is put to death, and you hang him on a tree, his body shall not remain overnight on the tree, but you shall surely bury him that day, so that you do not defile the land which the Lord your God is giving you as an inheritance; for he who is hanged is accursed of God.
– Deuteronomy 21:22-23

But there are two things to note here.

Firstly, Deuteronomy is the only book of the five books of law that contains laws to this effect.

And if Deuteronomy wasn’t even compiled until a good many years after David’s time, then we have the very real possibility that these laws in Deuteronomy were written because of Rizpah’s actions.

So how do we know that Deuteronomy wasn’t written by Moses?

Short answer? Because the opening verse tells us it wasn’t.

As Peter Enns observes, the opening words of Deuteronomy are “These are the words Moses spoke to all Israel beyond [on the other side of] the Jordan.” But Moses never crossed the Joran River to enter Canaan (Numbers 20:7-13). Which means the author is explicitly telling us that they are not Moses.[1]

Then there’s the question of whether the book, whilst not written by Moses, was still compiling words that Moses actually spoke.

We should bear in mind that it was a long-standing Jewish literary custom to ascribe writings to an earlier author. Isaiah’s writings cover periods that span well over a century; maybe he was predicting the future, but it’s more likely that other people also wrote prophecies and attributed them to his name. Similarly, the last six chapters of Daniel are written in a style that dates after Daniel’s time.

Similarly, whoever wrote and compiled Deuteronomy clearly wanted the book to carry the same authority as if it had been written by Moses, but there are many clues within the text that show it was written by someone else — or indeed many other people. So many in fact, that when you see them all together you begin to think that large portions Deuteronomy couldn’t have been written by him.

So what suggests that Deuteronomy was written after David’s time?

OK, what I’m about to explain here is all stuff I read in a book by Alexander Rofé: Deuteronomy: Issues and Interpretation (Edinburgh: T&T Clark Ltd, 2002). It’s all in Chapter 1: The Book of Deuteronomy: A Summary.

Of the five books of law, only Deuteronomy commands that worship has to be centralised into one place – scholars call this the “unification of the cult”. There were only two times in Israel’s pre-exilic history where the cult was unified – during Hezekiah’s reign (after David) and Josiah’s reign (even longer after David). So, any writings that presume unification of the cult have to at least be after Hezekiah’s time.

However, when Josiah unified the cult, he did that because he’d discovered a book of law in the Temple commanding it; we can deduce then that the laws about unifying the cult, which we only find in Deuteronomy, were written between the time of Hezekiah and Josiah. Or during Josiah’s reign.

This was a hypothesis put forward by De Wett in 1805. And it fits.

Bear in mind, for example, that before Hezekiah’s time, Gideon and Elijah both built altars and no one objected. No one said, “But Moses commanded that you only do that in Jerusalem!” In contrast, destruction of altars was considered a grave sin in 1 Kings 19:10-14. There can only be one logical reason for this: Deuteronomy’s laws about unifying the cult hadn’t been written.

Not only that, but the laws regarding the judiciary point to Deuteronomy being composed later; Deuteronomy 16:18-20 and Deuteronomy 17:8-13 contain laws that introduce appointed officials to replace local elders as judges/adjudicators. Again, this points to the book being written much later than Moses.

And when I think about Rizpah’s story in light of Rofé’s scholarship, I can’t help but think that her actions shaped the authorship of Deuteronomy.

I appreciate that David would probably have known other laws that should have given him pause for thought.

Joshua, for example, didn’t leave dead bodies hanging after evening (Joshua 8:29 and Joshua 10:26). (Though I’m not sure when the book of Joshua was written, so… maybe David wasn’t aware?)

David would also have known about Exodus 21:28, which forbids the execution of an ox’s owner, in the event that their otherwise well-behaved ox kills another person. There is a case for saying this pointed towards Deuteronomy’s law that children shouldn’t be killed for the crimes of their parents.[2]

It’s also possible that there were other laws amongst the Israelites, that were generally accepted, albeit not endowed with the authority of Moses.

Nevertheless, even if David was aware of these principles, the idea of punishing children for the crimes of their parents would still have been normalised for him – from Exodus if nothing else (Exodus 20:5-6). When faced with a famine and the need to pay recompense for genocide – yes, genocide – committed by the previous king, and no command from Moses saying the Gibeonites’ request was unlawful… well, it puts a different light on David’s decision.

That said, the lesson here is not to whitewash David with a glib, “He wasn’t breaking the law, so what he did was all OK.” I think the tone of the biblical narrative shows that David’s actions were considered regrettable, even during his day.

Rather my point is this: given that Deuteronomy is the only book of law that prohibits the actions David took, and given Deuteronomy was probably written after David’s time, there’s a case for arguing that Rizpahbrought about a cultural shift, which later resulted in a new law being written.

And if that’s the case, it’s a pretty big deal. And she should get the credit for it.

When David ordered Rizpah's sons to be killed for the sins of their father, she protested. And her actions may have changed the law. Click To Tweet

[2] Aaron Koller talks about this possibility in Unbinding Isaac: The Significance of the Akedah for Modern Jewish Thought Philadelphia: The Jewish Publication Society, 2020, 146.

One thought on “Wait, what if Rizpah’s protest against King David shaped the laws of Deuteronomy?”