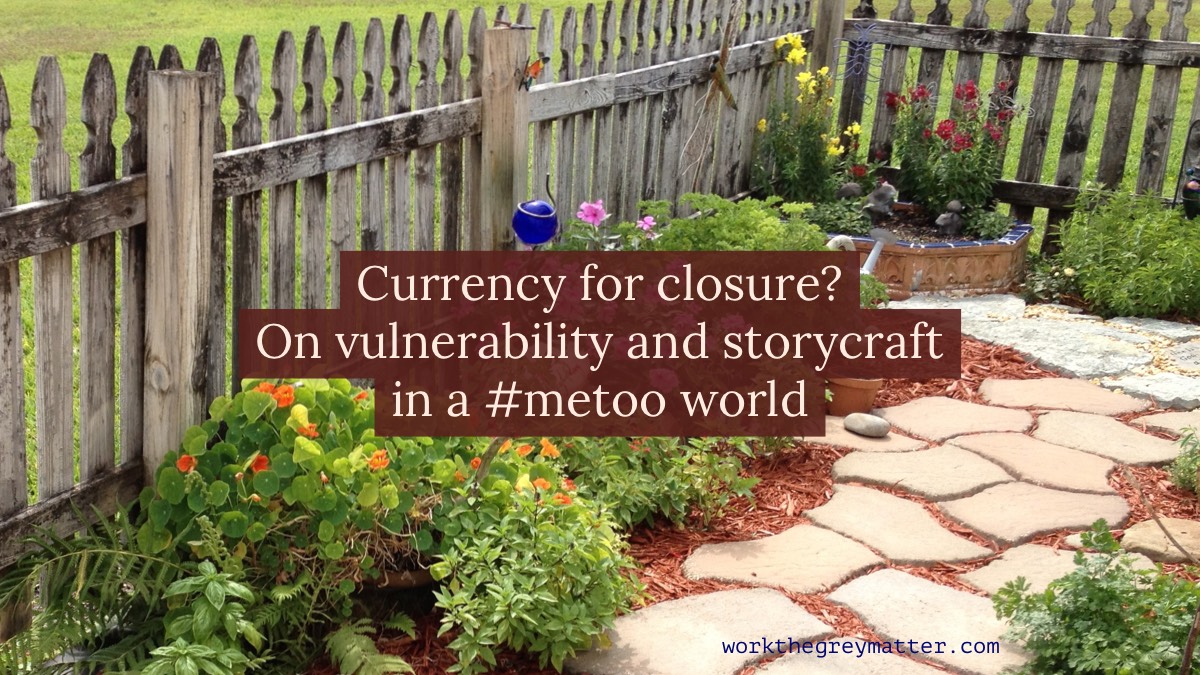 I want to talk about something that’s been on my mind, particularly since the #metoo hashtag started trending back in 2017.

The sharing of stories is undoubtedly one of the most important things in breaking open and exposing systemic abuse. Grooming frequently brings survivors to believe that they’re the only one it’s happened to, or that what happened was their fault. When stories are shared, that lie is shown for what it is.

And yet, telling one’s story doesn’t guarantee that a person will be heard and supported in the way that they need; nor does it guarantee that justice will happen as a result of them speaking up. Meanwhile, testifying can turn a witness into a harassment target, as happened with Christine Blasey Ford when she spoke about Brett Kavanaugh.

So we have this dilemma: sharing our stories can be powerful and important, yet it can also come with huge risk, especially when trying to shine a light on systemic abuse.

I have no doubt that survivors are aware of this risk. For many, it’s why they don’t disclose or only do so after a long delay. And yet, what does a survivor do when they witness the great outpouring of story-sharing that took place in 2017? What do they make of the high profiles of women like Christine Blasey Ford, Miriam Haley and Jessica Mann? Is it now possible to hope to be believed if a survivor does share their story?

I grant you, the odds of being believed are probably far better than they’ve ever been historically; but high profile cases, even those considered to be successes, don’t guarantee comfort or closure for any survivor in the event that they share their story. Now some survivors have already written about why they didn’t share their metoo stories, but it still troubles me that survivors might underestimate the risk and the cost of disclosure.

But still, though this might be an old phenomenon, a movement of solidarity against abuse shouldn’t become the impetus for someone to share their story in a way that’s unguarded or puts them at risk of secondary abuse.

It seems that Tarana Burke, founder of the Me Too Movement, had a similar concern. She described the morning of when the hashtag went viral with these words (emphasis mine):

“I was watching thousands of survivors pour their hearts out across social media with no container to process, no support and no one really helping to walk them through disclosure or uplift the power of community for survivors.”

So what do we do? Do we just… not share our stories? Do we only share them for the purposes of a court case? Do we keep things private until we’re famous enough to receive attention or rich enough to have had hundreds of hours of therapy?

Well here’s a suggestion for when we speak in the public domain: instead of telling our stories, let’s tell stories out of our stories.

I wouldn’t call myself a survivor, but I often speak about my experiences to exfoliate my internal state, whether it’s something minor or a major ongoing issue. What I offer though, can be anything from a raw emotional account to a fictionalised spin-off. Each story-telling method, each genre, has its own quality and purpose — and for the stories that are really important to me, I tend to use several. My husband has often remarked that I recall the same events in different ways depending on who I’m talking to and when. I select different details and put in different emphases.

The thing about telling a story out of a story, is that the framing becomes a container. I can convey the intended meaning and emotion to my hearers, I can feel legitimately heard, but there’s less risk involved.

I often hear people laud the merits of vulnerability as something that can make a story compelling to listeners and more relatable. And yes, that’s true. But telling a story or indeed many stories out of our story, allows us to be more selective about which things we want to be vulnerable about and are prepared to risk in the public domain.

It’s not an unqualified good to be vulnerable with other people. It actually makes me nervous to see someone going around being fully open and transparent because that often means they aren’t skilled in establishing healthy boundaries on their own terms. But when we can be purposeful about what we share and why we’re sharing it, we can do so in a more contained way.

It also gives space for people who don’t have that privilege. Some people have no small ways to tell their story. I can write about how I read the Bible without disclosing much about where I live, my work, my finances, my health conditions, my criminal record, my family life, my hobbies or my childhood aspirations. But for others, disclosing even just one central part of their life can be disclosing vulnerable information about all of these areas. So, if I can scale my stories to a commensurate size, the magnitude of others’ stories can be better appreciated.

I think of my stories as small sequestered gardens: everything’s been laid out so it’s harder to tread on the flowers by accident. Meanwhile, if someone comes in and deliberately stomps all over the place, the scale of damage is more limited and I generally have the emotional means to set everything back in place (even if I close the garden for a while).

This analogy of a garden is also helpful when thinking about those people who can’t speak about their story in a contained way. If someone is in a situation where speaking about one thing necessitates speaking about everything, their difficulty is not that they lack skill or boundaries, it’s that there’s just too much for one person to curate. So if we meet with such a person in their storyspace, probably we should offer to lend a hand in tending the vast expanse before us. (For example, by giving them encouragement and validation when they’re being trolled.)

I’m glad that #metoo has made it more acceptable for people to tell their stories, even when that means speaking about attitudes and actions that aren’t convenient for the world to acknowledge. But we have to recognise that stories aren’t a currency for closure, however much we might wish they were. You can’t contract them out for affirmation or validation — and the fear of missing out shouldn’t pressure us to try.

That being the case, there are two things I’d suggest we all do when we decide to share a personal story. First, consider carefully whether we’re looking for action and help — and if so, speak to safe people in safe spaces. Second, if we’re sharing to engage a wider audience, nurture our storycraft.

Stories don’t have to be factual to be authentic; what matters is that the frame and genre match the content. And if we can use that frame as a container, then we’re also less vulnerable.