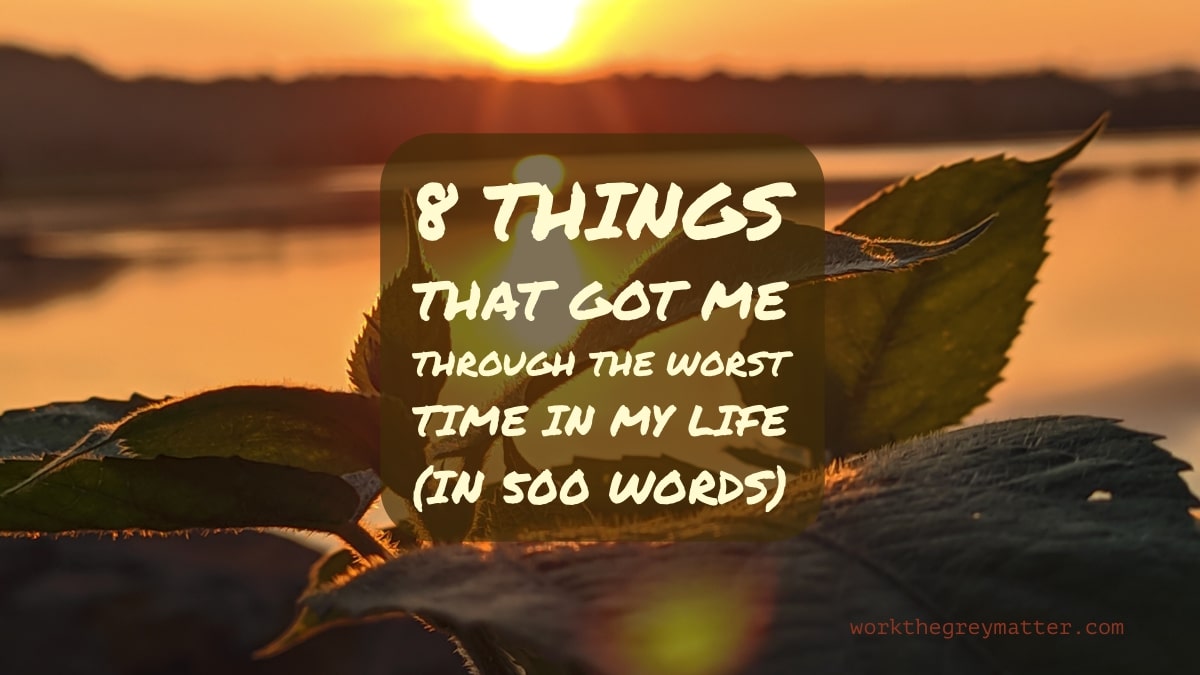 I shared this with a couple of people on Twitter and they said it helped them, so I figured I’d share on my blog too.

Background: I had a period of my adult life when I saw a systemic problem and I tried to raise awareness of it. However, the main person I tried to talk to was also one of the worst offenders. The issue therefore evolved into me talking to other people about that person, again trying to solve the problem, but without success. Along the way I became ill and had unhelpful advice from family and friends (especially around forgiveness). It only resolved (if that is the word, and only in part) after a few individuals took an interest and pulled some levers. By the time the dust settled, my life situation had significantly altered.

Caveats: I say this was the worst time in my life, and it was. But it is far from the worst thing that can happen to a person. If people see parallels with their own experience, I hope that helps, but everyone’s situation is different.

So, what got me through?

(1) Realising that “the issue” was no longer one issue and now I had a whole heap of health problems that needed care in their own right. I couldn’t keep holding out addressing them in the hope they’d be resolved when “the issue” was fixed.

(2) Realising that I kept sharing my story hoping for certain reactions, and that I kept being disappointed. In the end, I decided only to share with a few targeted people. It was enough to feel heard by them.

(3) Recognising that no one person would be able to discuss all the facets of my situation with me. I had to invest in conversations with people that worked to their strengths and not their weaknesses.

(4) Realising I needed spaces where I could just be me, not “that person to whom that thing happened”.

(5) Realising I was not the first person to be in this situation. And maybe I could have been wiser at the time, but that doesn’t mean I could have prevented the outcome.

(6) Realising that I kept looking to the crowd, the collective, the organisation as a kind of mother who would take ownership of this problem I couldn’t handle. And then realising that it wouldn’t take it on in the way I had hoped. This realisation was absolutely crushing, but I needed to know this.

(7) Realising that I could play a long game and I didn’t need to be vindicated right now. I needed to think about the long term good for me.

(8) Being blessed with a few good people who did a few good things that over the course of months made me feel alive again. This was something beyond my control, but they made such a difference and helped me through.

I wrote a creative stream-of-consciousness about the mental chaos that goes on when a person calls out abuse, partly inspired by what happened to me; you can find that here.