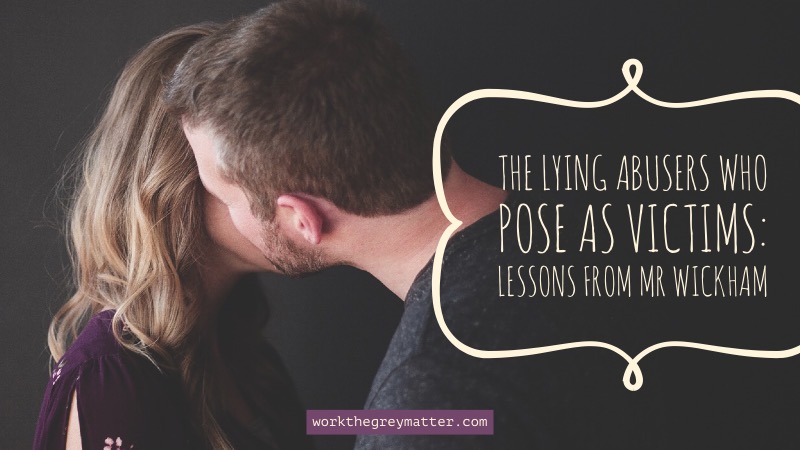 Having recently grown in admiration for Jane Austen as an author, my husband and I are rewatching the BBC’s 1995 six-hour adaptation of Pride and Prejudice. That’s the one where Colin Firth plays Mr Darcy. *swoon*

Anyway, we watched the scene where Mr Wickham (who later turns out to be the villain of the piece) introduces himself to Lizzy (the heroine).

From a #metoo and #churchtoo perspective, this scene is fascinating. We’re in a world where abuse victims are routinely disbelieved and it’s far too easy to say, ‘What about false accusations?’ What we have with Wickham though is an illustration of how an abuser can lie and claim to be a victim. It’s worth studying.

Wickham starts by probing a little into Lizzy’s opinion of Mr Darcy. When it’s clear Lizzy hates Darcy, Wickham implicitly praises Lizzy for being one of the few who, like he, sees Darcy for the horrible man he is. Wickham probes for more information and then says he is courageously resolved not to retreat elsewhere, despite Darcy’s bullying presence. (Wickham uses different words, but this is essentially what he’s saying.) Lizzy’s admiration for Wickham grows.

Then Wickham leans in and tells of his personal connection with Darcy giving all manner of specific, factual details. He says how Darcy’s father wanted Wickham to have a position in the church but that Darcy maliciously blocked this after his father died. Wickham uses understated language, drawing Lizzy to use more aggressive words.

And then when Lizzy asks why Wickham doesn’t publicly expose Darcy, Wickham says it would dishonour Darcy’s father, which he doesn’t want to do because he has such respect for the man.

But he gives another reason too.

“I’ve not the resentful temper that some men have.”

Wickham says many things that you could reasonably expect to hear from a genuine victim of abuse. He points out how:

Now when I watch this scene, it’s eerie how much he comes over to me as bogus.

The difference between a victim and a liar

I’ve only knowingly interacted with three serial liars in my time, but they all had one thing in common. When I expressed concern and queried about ways to improve the situation, they shrugged their shoulders, sighed and said that they would be a “better” kind of person and let it go.

And this is what Wickham does.

Now, I have to throw in a whole book of caveats here and say that this alone doesn’t prove someone is lying. People can be abused in many different ways and react in many different ways; this can easily undermine their credibility as people, or mean that they are unable to present their story in a way that appears credible.

All this said though, there are liars. And it strikes me that this pattern of deceit is like grooming. Grooming is incredibly difficult to spot or prove before harm has taken place because it starts with normal-looking behaviours. Similarly here, Wickham’s lies start with all kinds of normal-looking questions and statements, that someone might be reasonably expected to make if they had been abused. This means it takes a lot of discernment to suss out when someone is lying.

It’s interesting to weigh how Wickham presents his fact pattern and how he steers the conversation. He doesn’t want help, he wants to boost his image as a magnanimous ‘better than that’ person. It’s not just that he doesn’t express distress at his circumstances, it’s that he wants to capitalise on them to win Lizzy’s favour.

Wickham is helped by the fact that up to this point Darcy has gone around being all condescending and rude. (Abusers prefer to lie about people who are easy to lie about – it makes the lie more believable.) Thus Lizzy is immediately willing to believe Wickham without any proof. Now Lizzy is a smart woman, but she has no established relationship with Wickham; she hasn’t been able to see his character in action and reaction. This means Lizzy has little or no grounds to challenge or probe Wickham.

Thus, Wickham lays the groundwork to become an effective abuser in Lizzy’s life.

So what can we do to spot the lie?

First and foremost, always give people the benefit of the doubt when they say they’ve been abused. Abuse is under-reported and false allegations are few compared to legitimate ones.

However, if you find yourself talking to someone who:

then proceed with caution.

Listen, weigh, ask questions politely. Consider courses of action that you wouldn’t regret doing if the story was later proven to be false. See if you can bounce the account off someone who has more knowledge of the kind of abuse or the situational dynamics that you hear described. But don’t make yourself vulnerable. Don’t make promises, don’t accept promises and don’t disclose anything about yourself (or others) that they could later use against you.

Most survivors of abuse are hungry for justice. They might not have the resources to handle the long hard work of chasing it, they might be too afraid to chase it and they might not believe they’ll get it. They might have patchy memories or be unable to coherently present their account. They might see themselves as terrible people, blaming themselves for what happened. They might despise what their abusers did and long to be more ethical themselves. And yes, they might genuinely have had an experience of forgiveness (though this is unlikely without first passing through intense grief and anger).

None of these things should be used to undermine their credibility.

Although I’ve seen many survivors struggle with the ongoing unjust effects of abuse, I’ve never seen a survivor eager to claim that they’re aren’t going to be bitter about what happened or its consequences. Instead, the people who I’ve heard say this, were each later proven to be liars.

It’s that smugness that makes me so very wary. It’s that shrugging of the shoulders as if to say, “Yeah, but whatever; it’s not a big deal if I can’t change my circumstances.”

This narrative doesn’t stack up.

If the abuse was a big deal, then not being able to take action about the abuse is also a big deal.

I should point out that some people (like Wickham) lie offensively, while others lie defensively. With a defensive liar, even if a significant allegation is proven to be false, there might still have been something that happened that shouldn’t have happened. Finding the truth is a hard business. There are no easy answers.

The best we can do is weigh their behaviours, fact-pattern and manner of presentation against the many documented examples of people who were genuine victims. The more we read those real stories, the more familiar we are with the various emotional journeys that people can go through as they experience, escape from, and recover from abuse, then the more likely we will be able to smell it when something is off.

And yes, we could be wrong about someone. But if we have a strong amber light, at least we can take precautions to stop ourselves from being groomed and abused. Or indeed used to perpetuate the abuse.

If you want further reading, there’s a useful post on Cryingoutforjustice.blog How to Spot an Abuser Who Claims to be the Victim. It talks primarily about abusers who are more overt than Wickham, but it makes some useful points and has links to further discussion on this topic.

If you want to read more about grooming, this post analyses the dynamics seen in the first 14 chapters of Fifty Shades of Grey: Beast vs Christian: The dark art of grooming.

Meanwhile, if you want to see the Pride and Prejudice scene itself, there’s a YouTube video of it here: