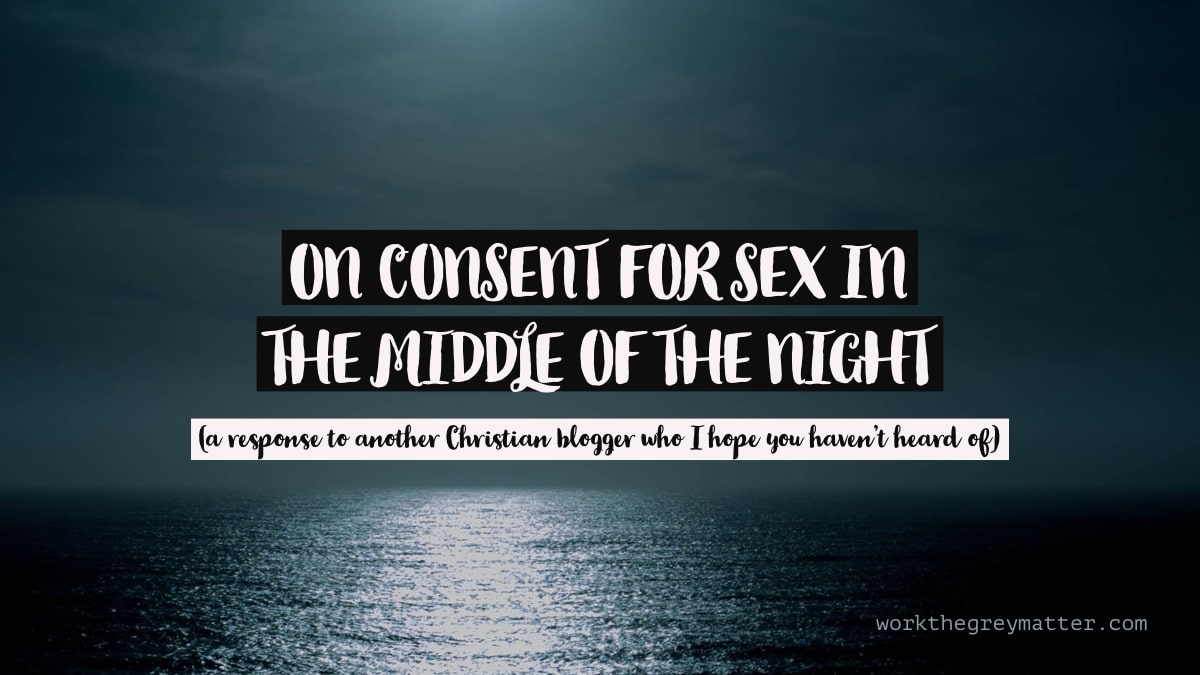 The middle of the night is not usually a good time to do things other than sleep. Lack of sleep makes us tired and most of us don’t get to snooze during the day. That said, sometimes our sense of nocturnal fun means we make exceptions.

Something you’ll hear me say is that marriage doesn’t give spouses a right to sex, but rather a right to approach each other for sex. So, in theory, sex in the middle of the night is on the cards.

Problem is — if your spouse is asleep, how do you know if it’s OK to have sex with them?

Well, for starters it is never ok to have penetrative sex with someone whilst that person is asleep!

Not even if that person is your spouse.

Some people try to argue with this, saying a husband might be half asleep himself and not really thinking straight and his sexual urges just get the better of— no, no no no no no! This is not OK!

I grant you sometimes we do weird things in our sleep, but that doesn’t mean those things are OK or normal. For example, if one person has night terrors and if, whilst they are still asleep, they hit someone else, that is still assault even if it wasn’t intentional. So no one should be normalising the idea of husbands sleepwalking into sex, less still the idea that wives have to be OK with that.

Entering another person’s body is a very big deal and it needs active consent each and every time.

So, if you want to have sex with your spouse and they’re asleep, then either you just don’t have sex with them, or you wake them up and ask.

The next question is:

When is it OK for a husband to wake his wife in the middle of the night so that he can ask her for sex?

In simple terms? After they’ve had a conversation about it and after she freely agrees that it’s OK for him to wake her up.

But there are caveats.

Marriage might give spouses the right to approach each other for sex, but it doesn’t give anyone the right to switch off their brain. You still need to have wisdom in when you exercise your right of approach.

You don’t ask for sex when you’re in public, or when your spouse is catching up with an old friend, or when they’ve finally had a chance to do that one task that’s been bugging them for ages. So if you’re going to ask in the middle of the night, knowing that you’ll both probably be a bit more tired the following day even if you don’t actually have sex, then you need to talk about that in advance.

And don’t just talk about penetrative sex. Talk about how awake you want to be for holding, or touching, or starting to stimulate each other. You might be enthusiastic about your spouse waking you up with their caress, but equally you might not be. Both are legitimate; what’s important is that you both communicate clearly and respect each other’s consent.

So, let’s imagine then that a married couple have that conversation, and they both say, “Yes, in principle, I’m OK with you waking me in the night and asking for sex.” Can the husband wake the wife in the middle of the night? Yes he can! However, if he wakes her and she says no, he has to accept that answer.

If she’s, like, recovering from being ill, it’s probably not a good idea. And if she explicitly said that she was not up for sex when they went to bed that evening, then she has given her answer already and he should not even wake her.

So: sex in the middle of the night can be great if both spouses are up for it. But they have to talk about it before one of them wakes the other up and it’s never OK for one spouse to have sex while the other is asleep.

This is really simple stuff. But apparently it needs to be said.

This is actually the second of two posts on consent in marriage, written in response to a post and video made by Lori Alexander, aka The Transformed Wife. This is the first: On wives ‘depriving’ their husbands of sex because she ‘doesn’t feel like it’ and if you really want to read what Lori wrote (CONTENT WARNING for the normalisation of marital rape), you can find that here.

If you liked this and want to dig more deeply into consent, do check out my epic 5,500 word post Sex and Consent: How does that work in a long-term relationship?