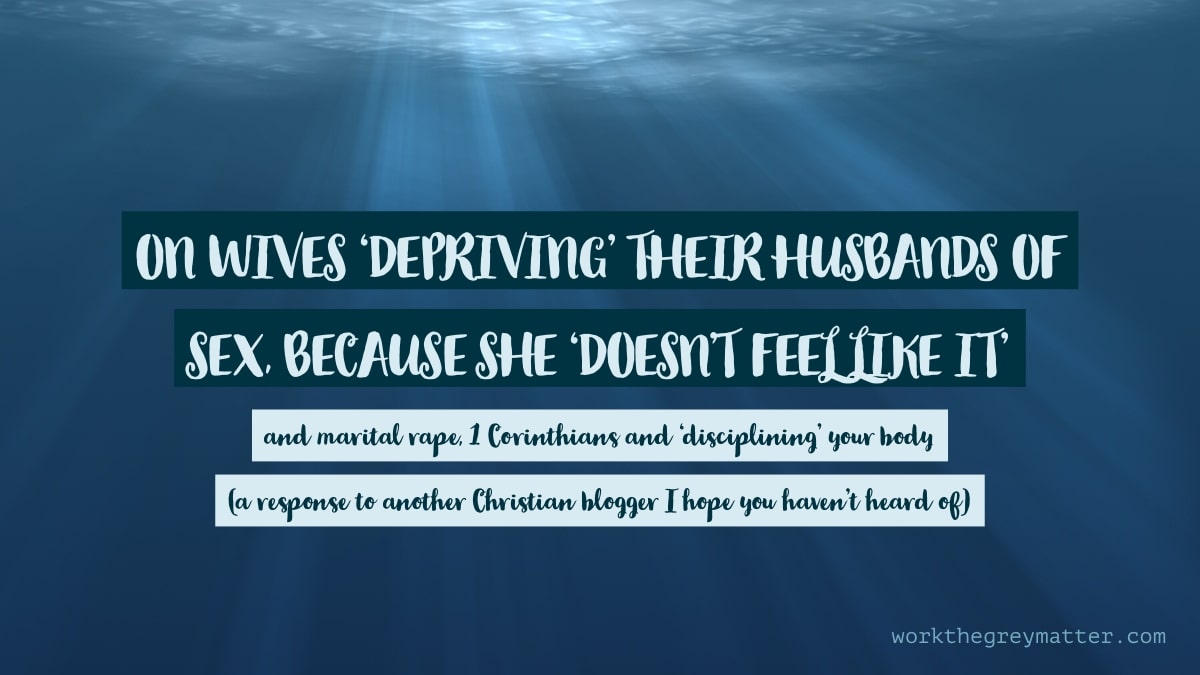 (…and marital rape, 1 Corinthians and ‘disciplining your body’. This post is a response to another Christian blogger who I hope you haven’t heard of. I’ve made two videos covering this post on my Facebook: part 1 is here and part 2 is here.)

And sometimes that’s how wives feel when they’re approached for sex.

For now, let’s park the question of whether the husband is at fault or not. Her feelings are real and it’s important for her to pay attention to them and understand what her heart and her soul are trying to communicate. God gave us feelings for a reason and they’re a good part of who we are.

And I know that there are many things in life that we do without putting our feelings first, like going to work or caring for people who depend on us. But in all of those situations, we do the thing we don’t want to do, because we know that it achieves something good and we know that the cost of not doing it is detrimental.

But, whereas this is true of sex in general, it is never true of sex on any single occasion.

On the flip side, what is always true of sex, is that it is meant to be a form of play. Play can’t be forced, and if you try to force it in an activity as vulnerable and powerful as sex, then the effect is harmful.

I don’t say this just because I’m a feminist; I say it also because I’m a Christian. I believe God made sex to speak about unity. So if spouses have sex when one of them actively doesn’t want it and didn’t freely consent to it, then the message spoken goes against what God made sex for; instead of celebrating the relationship, it sows disunity into the marriage.

As Christians we should know better than that. We should live our lives by doing what is right, not what we feel like doing whenever we think we can get away with it. Marriage doesn’t give spouses a right to sex, it gives them a right to approach each other for sex.

Of course they don’t want to refuse sex all the time, but it is still always OK to refuse sex. A wife isn’t depriving her husband if she refuses him from time to time. But he would be violating her if he ever penetrates her without her active consent.

I’m not saying this because I think women’s bodies are more important than men’s bodies. I’m saying it because it is always a very big deal to enter a person’s body and because the sex we’re talking about here, is the kind of sex where the husband enters the wife’s body.

That always needs her consent.

It doesn’t matter how drunk or drowsy he is, penetrative sex without active and freely given consent is rape.

Can it be OK for wives to consent to sex when they don’t feel like it?

All that said, is it possible for a wife to freely consent to sex, in order to give her husband pleasure, even when she doesn’t feel like having sex, for no other reason than that she loves him?

OK — here’s my answer: yes, it is possible, but only within a wider relational context where her sexuality is valued equally with his, and she knows it and she feels it.

We live in a culture that frequently says women only have value because of sex, and that sex is just to give men pleasure. These messages assault and diminish women daily, so if husbands are to be godly wife-lovers then they need to be thinking about how they can elevate and celebrate their wives sexually. She is worth that.

And if she has negative feelings about sex, then living in unity means working through those feelings together; it’s about cradling each other and getting help if necessary. It is not about him — or anyone else — persuading her to ignore her better judgement just enough for him to get what he wants.

I’m saying because some Christians out there weaponise Paul’s words in 1 Corinthians, saying that a wife lacks discipline over her body if she can’t bring herself to consent. Except, the passage they’re referring to is actually about food and how Paul ate with the Gentiles as a way of meeting them where they were at. Paul was likening himself to an athlete competing for a prize in order to make the point that he didn’t consider his body more important than his mission of spreading the gospel.

But if you think that a wife’s body has only secondary importance when it comes to sexual intercourse, then I think you’ve the missed the point. And if you think that it’s somehow holy for a wife to suppress her negative feelings and have sex with her husband anyway, like sex is this sacrificial suffering that she undertakes for his sake, then you are normalising abuse.

Sex is not about restoring or preserving a person’s sense of self worth. It’s about celebrating their worth in a context of unity. And unity doesn’t mean always wanting sex at the same time; it means finding a rhythm in your sex lives that both spouses can enjoy, where neither feels emptied. And if that’s not happening— if, for example, a wife doesn’t want sex, but she wants to want sex, then her husband should be meeting her where she’s at in her sexuality. And if he refuses take the time and effort and self control to do that, then I think he falls very far short of the standards that Paul promoted in his letters.

Husbands, love your wives. Don’t twist Paul’s words to put pressure on her, but care for her body as you would care for your own.

Wives, love your husbands as yourself. If you care about his desires and needs, then care also about your own. Because if love in a marriage is meant to be mutual, and if, as Paul wrote, abstaining from sex should be mutual, then you can be sure that consenting to sex should also be mutual.

May these words be a blessing and a comfort to you.

[1] With CONTENT WARNINGS for rhetoric that promotes marital rape, you can find Lori Alexander’s post and video here. She also blogs under the name ‘The Transformed Wife.’ To be fair, she’s not the only blogger out there who espouses rape myths, but my post here is a response to the video she made.

If you’re interested in further reading other stuff I’ve written:

For some more detailed analysis of 1 Corinthians 7, do check out Margaret Mowczko’s resources, such as: A wife has no authority of her own body? and Mutuality in Marriage. For more on abstinence within early Christian aceticism, she also wrote Chastity, Salvation and 1 Timothy 2:15.