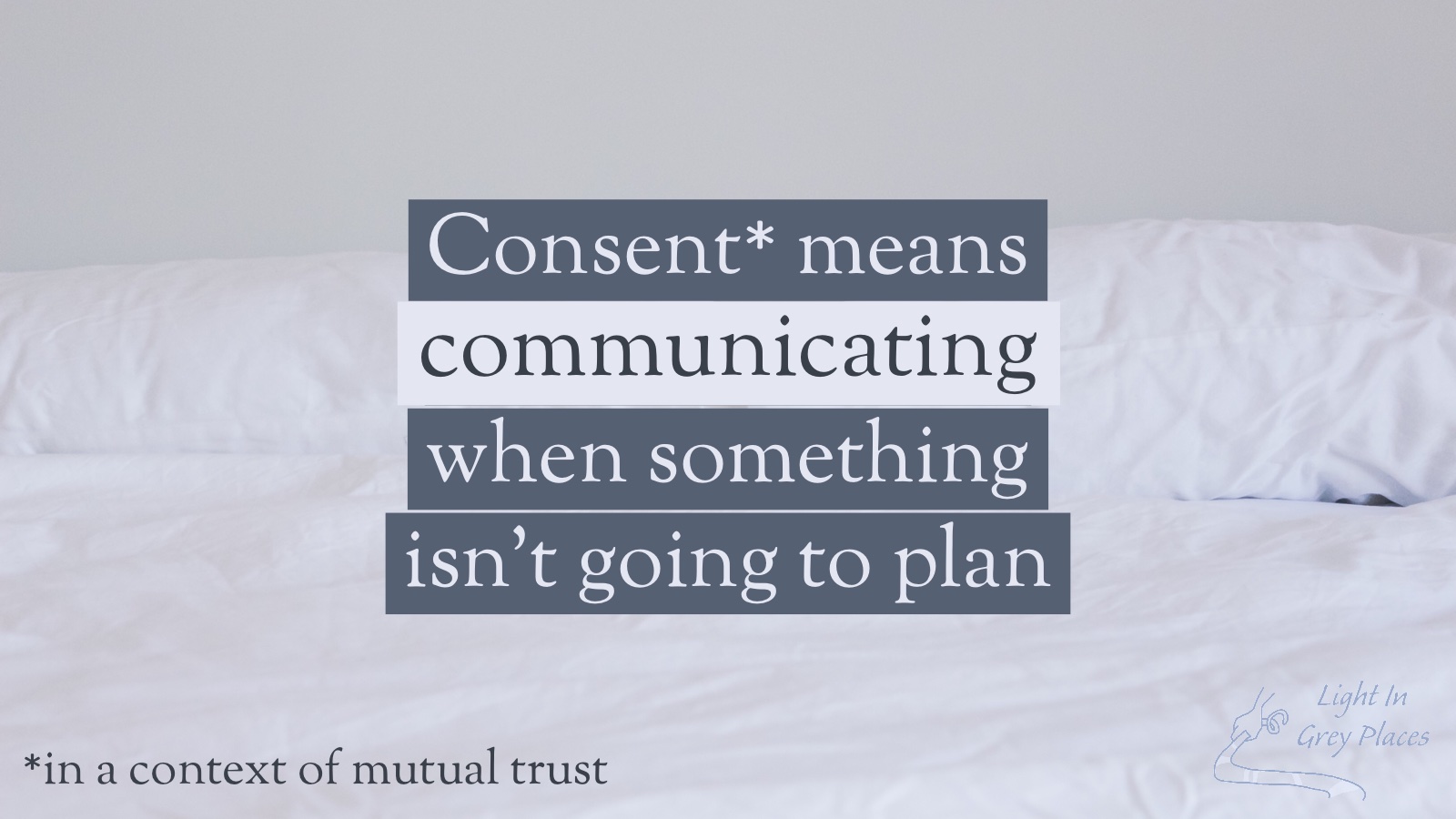 When it comes to sex, “consensual” isn’t the same as “no mistakes.”

People talk about “active, informed and enthusiastic” consent because it goes a long way to prevent the above. Those kinds of things aren’t mistakes, they’re down too bad consent.

But even when you stay well clear of all that, even when your partner is a decent human being who would never want to violate or harm you — that doesn’t mean everything always goes to plan. Maybe an unwelcome memory rears its ugly head. Maybe your body starts feeling wildly uncomfortable when you didn’t think it would. Maybe you didn’t shut the door and the cat walks in.

Mistakes will happen; the question is, what do you when you realise it’s not working? And do you learn from your mistakes?

The wisdom of consent

I believe that giving and accepting consent – the good kind – is a form of wisdom. But wisdom isn’t something you can buy pre-packaged off a shelf (even if some good books come close!) Instead, it’s something that grows with experience and it involves learning from your mistakes.

It’ also true that part of wisdom is recognising when you’re in a situation you didn’t anticipate or bargain for. If you’re really wise, you’ll catch it early on. Maybe you’ll know in advance that that amazing sex you love to imagine just isn’t going to work in practice. But sometimes, you won’t realise until you’ve reached a point where, whatever you do, it’s going to cost someone something. It’s just a question of who and how much.

When I withdrew consent

In the early days of my sex life, it took me a long time to understand my body (actually, that’s still a work in progress). Having had a pattern thoroughly painful sex, I had been going for therapy with my husband and things were generally on the up. But. There was a time, after my husband and I had reached the point of penile-vaginal penetration, when I realised it was not going to be good for my pelvic floor.

By that point I only had two options:

Neither of these options is what you want in sex. They are both pretty rubbish. But my husband much preferred me choosing the second. And when he knew he could trust me to communicate with him openly and guilt-free, then he was less anxious during penetrative sex.

The point I want to make here is that if you say, “I want this”, (without coercion, without pressure, as informed as you can reasonably expect to be), and your spouse accepts that consent, then they are proceeding on the understanding that you want it. And if you are confident you want it, and they are confident you want it, then your spouse probably isn’t going to check in five minutes later to ask if you still want it. So if you then realise, “Actually, no I don’t want this” you’ve got to communicate that.

A good partner will notice if you’re not giving off the ecstatic cries of joy they were expecting — but you know what? Sex is complicated and there are loads of different ways we can react when we’re enjoying and not enjoying sex. However much your partner may want to remain alert to your arousal status, their ability to read you won’t usually match your internal knowledge of your body. That’s why your communication matters.

Silence is a rubbish option – for everyone

Your partner did not consent to sharing sex with you that you didn’t want; so if you don’t tell them it’s not going to plan, you’re putting them in a situation they didn’t consent to.

And I know, it’s horrible feeling like you’re letting your partner down by pulling the plug on something you thought was going to be fun; but trust me, speaking up is way better than staying silent. Staying silent means:

I’m guilty of all three. Whether you’re the person ‘giving’ sex or ‘receiving’ sex, disappointment is way better to navigate than feeling misled. If you think the issue is manageable, fine, have a pause and renegotiate — but communicate.

And, as I said, if you’re ‘receiving’ sex then your partner should always be alert to your body language and any non-verbal cues that not all is well. I’m not saying that it’s all on you to speak up (it isn’t); it is on them to be listening and checking in.

What I’m saying is that if the problem is becoming apparent in your body, then you will probably be the first to know. I’m saying it’s possible for your partner to be as alert as they can reasonably expect to be, but still not know that you’re not OK. Especially when you’re doing something that you were both confident enough about that you did feel the need to give active consent continuously.

So, if you know it’s not working and you don’t choose to speak up, your only other option will be to hide it. And however skilled you might be in putting up the front you think your partner wants to see, I don’t think faking it will do your relationship any good. It definitely didn’t do our marriage any good.

Withdrawing consent – why the disappointment is worth it

Well, if they did do that to make a sport out of you… my goodness, that is abuse and indicates a massive relationship problem!

But if the consent was given in good faith then you can be sure: your partner withdrew consent because it was necessary. So don’t guilt them, don’t get suspicious of them. Though if you see a pattern emerging, ask questions and get help.

I often say that ‘consensual’ means knowing you can withdraw consent at any time, for any reason. Why do I say that? Because withdrawing consent always comes with someone kind of cost to your partner and when you’re in the moment, that’s all you can think about. But it’s OK to make these kinds of mistakes. It’s OK to take that cost in the short term. It’s OK to pause and figure out together what to do next.

Wisdom knows that in the long run, communicating is the better option for you both.

If your partner is a decent human being, then when they accepted your consent, they also accepted the risk that you might withdraw it. And they accepted that risk because they’d rather bear the disappointment of withdrawal, than violate or harm you. That was why my husband stopped when I asked him to and he didn’t begrudge doing so.

So yeah, consent doesn’t mean no mistakes. It means wisdom. And wisdom grows.

Consent doesn’t embarrass or push itself onto another,
doesn’t get angry if consent is withdrawn,
or bear a grudge if sex doesn’t live up to expectations;
consent doesn’t gloat at others’ harm,
but delights in free and honest negotiation.
– From “But if I have not consent” a poem I wrote based on 1 Corinthians 13:1-8

If you want a much longer and fuller essay on consent, this is (currently) the most comprehensive thing I’ve written on the subject: Sex and Consent: How does that work in a long-term relationship?

If you’re having difficulties with sex, I cannot recommend enough “Come As You Are” by Emily Nagoski. It’s not the only thing she’s written, and she even has worksheets on her website that you can download.