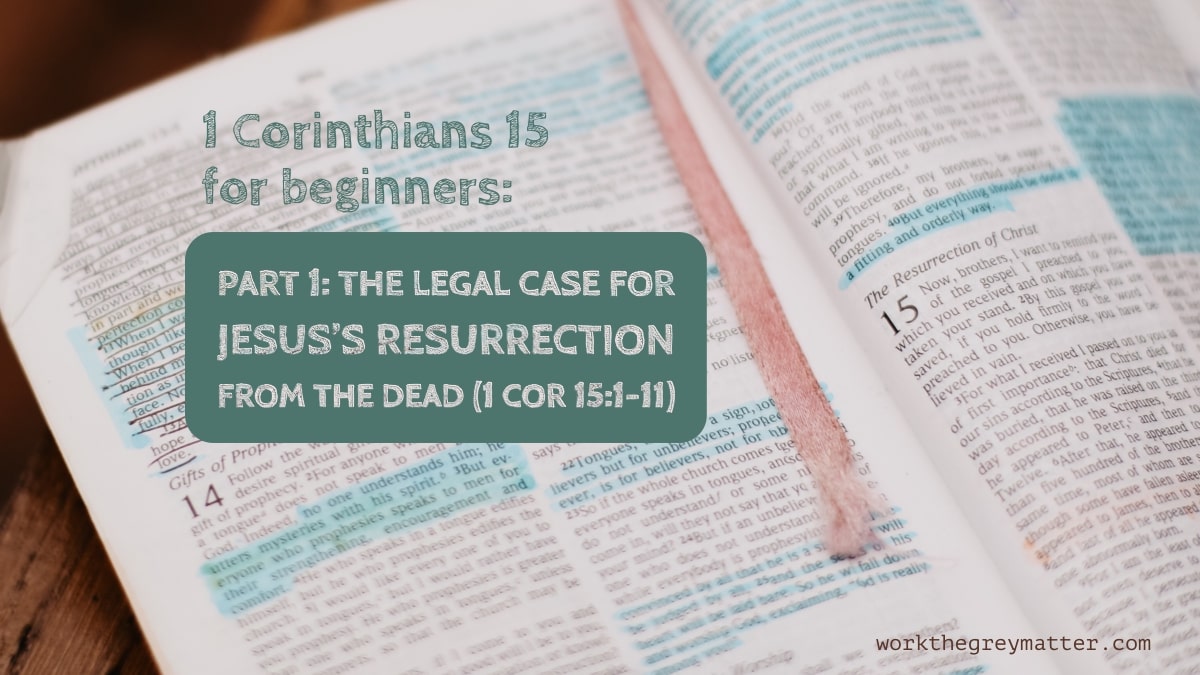 1 Corinthians 15 is one of those chapters you literally have to read verse by verse. Then you read each verse again about 4 times to get it.
– Sierra White

Paul’s first letter to the church in Corinth, chapter 15, is one of the greatest chapters of the New Testament and it’s all about resurrection. At 58 verses, it is, in itself, a modestly sized sermon when you hear it preached on today, it is often tackled in very small chunks. And you can see why — there’s a lot to unpack.

But what I’m going to do in this post and the next three, is sweep through the entire chapter. Albeit, without reading every verse four times! The aim here isn’t to say everything that’s worth saying or to deconstruct every warped interpretation you might have heard. Rather, it’s to give a light touch explanation of how this how symphony fits together.

Much of what I’ll be sharing comes from three particular books that I’ve read over the last few years:

So there is going to be a lot in this series on hope, resurrection and the body. That said, I’m not doing this because I want to give you an academic lecture. I’m doing this because I believe hope is for everyone, resurrection is for everyone and, having a body and being part of the body of Christ is for everyone. I learnt about those three things, from these books. It is my hope and prayer that the understanding I received will dwell richly within you and work transformation in your lives, as much as it has done in mine over the last few years – if not more so.

Yes, Jesus actually rose from the dead – we have witnesses!

I want to make quite clear to you, brothers, what the message of the gospel that I preached to you is; you accepted it and took your stand on it, and you are saved by it, if you keep to the message I preached to you; otherwise your coming to believe was in vain. The tradition I handed on to you in the first place, a tradition which I had myself received, was that Christ died for our sins, in accordance with the scriptures, and that he was buried; and that on the third day, he was raised to life, in accordance with the scriptures; and that he appeared to Cephas; and later to the Twelve; and next he appeared to more than five hundred of the brothers at the same time, most of whom are still with us, though some have fallen asleep; then he appeared to James, and then to all the apostles. Last of all he appeared to me too, as though I was a child born abnormally. (NJB)

Paul starts with Jesus’s resurrection before any discussion of what resurrection might mean or look like for anyone else and he calls the Corinthians not to doubt the message they received that Jesus rose from the dead.

In doing, Paul names a leading  disciple of the church – Peter, who was also known as Cephas – as a witness to Jesus’s resurrection; then he names the other disciples, then the crowds, then himself, referring to his conversion experience on the road to Damascus.

What Paul is doing here is presenting the legal case for why the Christians in Corinth can have confidence that Jesus did rise from the dead, even though they themselves might not have been witnesses to Jesus’ resurrected life.

Paul’s legal case doesn’t work as strongly for us now, given that both Peter and Paul have been dead for centuries. Instead we would look at the historical case. Tom Wright has written much on that subject in his books Surprised by Hope and The Resurrection of the Son of God. One point he makes is to draw attention to the fact that in first century Palestine, a legal case was best supported by multiple male witnesses. This is why, here in 1 Corinthians 15, Paul does not mention the women who, in the gospel accounts, first visited Jesus’ tomb.

Now on the one hand this erasure of the women’s part in the Easter story is irksome. But on the other hand it also shows that it’s very unlikely that the gospel accounts were made up using Paul’s theology. If people had wanted to invent the story of Jesus’s resurrection in a way that people would consider credible, they wouldn’t have written the gospel accounts as they currently are. This strongly indicates that Paul’s theology is based on the gospel accounts or, more likely, the early oral traditions from which the gospels drew. It also points to the authenticity of those early accounts.

Paul also cites himself as a witness to Jesus’ resurrection, though in the next few verses, he briefly clarifies his own story so that no one gets the impression that he thinks more highly of himself than he ought. And he concludes in verses 9-11 by saying that actually, it’s not about him or about the apostles:

For I am the least of the apostles and am not really fit to be called an apostle, because I had been persecuting the Church of God; but what I am now, I am through the grace of God, and the grace which was given to me has not been wasted. Indeed, I have worked harder than all the others—not I, but the grace of God which is with me. Anyway, whether it was they or I, this

– Jesus’s resurrection from the dead –

is what we preach and what you believed. (NJB)

Again Paul reiterates that Jesus rising from the dead was the message preached in Corinth. Why is this such a big deal for Paul? Well, it’s because Jesus’ resurrection is what you might call a “load bearing” event. [Paula Gooder, Body]

Like the seat and rear wheel of a bicycle, it’s where we put the weight of our faith. And, stating the obvious here I know, Jesus’s resurrection is an event in the past. This is important to appreciate.

Faith =/= Hope — though the two are related

Christians aren’t asked or expected to have faith in a future event. The thing that we really rely on is something that happened as a matter of historical fact.

This is not a matter of ‘the Bible says’ therefore it’s true. Rather, I’m convinced that physically Jesus rose from the dead because:

As I said, Tom Wright has written a lot about this. Whatever it was that happened between Good Friday and Pentecost, it was something pretty phenomenal; not only does Jesus’s resurrection explain and fit with everything else that happened, no other explanation comes close.

As for the possibility of our future resurrection and Jesus’s second coming — these aren’t events to put our faith in. Instead, we hope for them. So, where the past is historical and load-bearing, like the seat and rear wheel of a bicycle, hope is the like the front wheel: it directs how we travel. [Tom Wright, somewhere, I forget where]

More on that in the next part of this series.