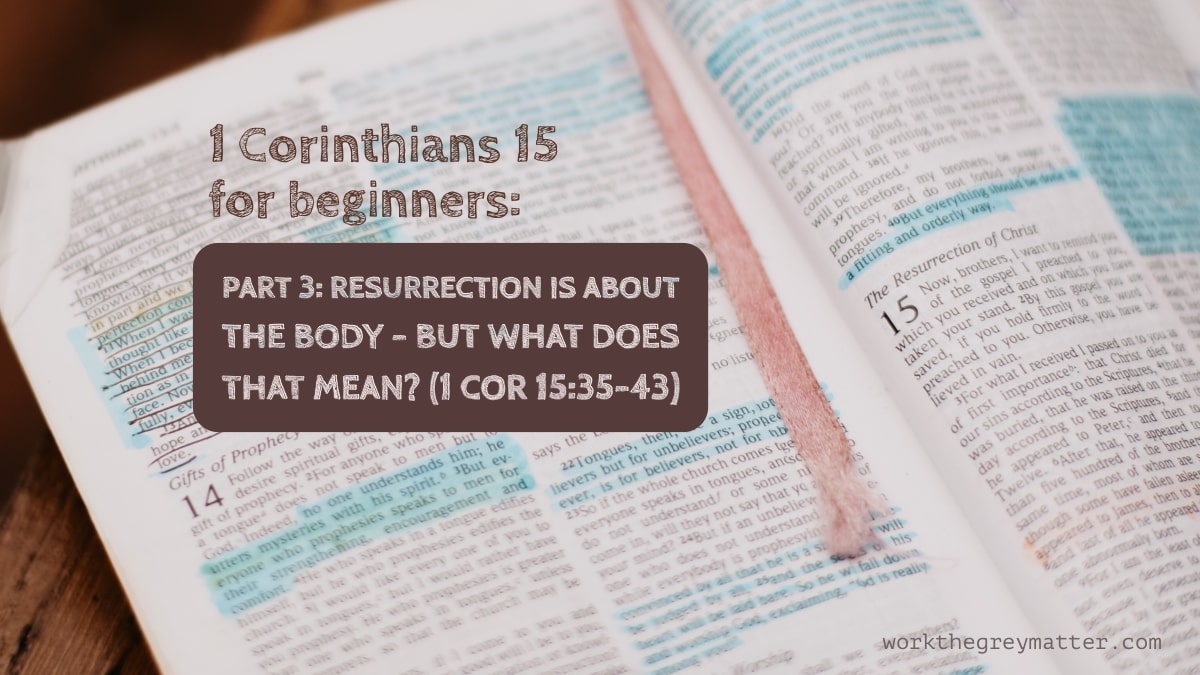 Welcome to part three of my four-part series sweeping through 1 Corinthians 15 on the subject of resurrection. You can read part one here and part two here.

In verses 1-11 Paul established that Jesus rose from the dead — an event in the historical past. In verses 12-23 Paul explained that Jesus resurrected before everyone else because he was a ‘first-fruit’ and that everyone else will follow, collectively, in the future. Then in verses 30-34 Paul acknowledged that his ministry looked like a failure if you just considered success in present terms, but still he works to anticipate future resurrection in the here and now.

Now Paul turns his attention to the nature of the future resurrection body.

We’re about to dive into one of the most misunderstood and mistranslated passages in the whole of the New Testament. But before we do that, we need to talk briefly about what Paula Gooder calls our ‘inner Plato’, that many of us don’t realise is there.

Plato was a Greek philosopher and he believed that the body was evil, and that the destiny of people was for the inner spirit or soul to escape the body. I am simplifying here; but the take home point is that he influenced Augustine, and Augustine influenced the church. This has meant that the church, and Western society in general, has a view of the body which generally assumes that the body is bad.

But this raises all kinds of awkward questions.

It is important that we do not minimalise or dismiss these concerns.

However, the hope of escaping and losing the body, is not nearly as strong as the hope of being reconciled with our bodies. And part of what the resurrection hope is about, is having a complete and integrated identity.

This is one of the reasons why it’s also important that we don’t use the image of resurrection as a way of saying that people’s bodies are wrong or need replacing. That is, in essence, another way of rejecting the body, and it’s not what Paul expounds in the New Testament. The vision he presents in the New Testament would be better described as this: we will have a body, and it will be good. It will not be a body that has never known tears, but one from which all tears have been wiped away.

Right, let’s get stuck in.

Someone may ask: How are dead people raised, and what sort of body do they have when they come? How foolish! (35-36a, NJB)

The whole issue of what resurrection bodies will be like is something that regularly emerges as one of the first questions we want to ask. … Will they be recognizable as our bodies or look different? If there is something ‘wrong’ (I hate the word but it is often how the question is asked) with our bodies now, will it still be ‘wrong’ after the resurrection? … It is somewhat off-putting, therefore, to encounter Paul’s robust answer, “Fool!’ The Greek is, reassuringly, not quite as rude as the English translation suggests. It has the overtone of a senseless question, or a question without sense. [Paula Gooder, Body, p51-52]

The way I have made sense of this verse and how it leads into the following verses, is to imagine that Paul has been saying to the Christians in Corinth, “You’re going to be like flowers.” And then they’ve said to Paul, “Are these flowers going to be flat and green, like a pumpkin seed? Or black and white striped, like a sunflower seed? Or little tiny black specks, like a poppy seed?” And Paul is saying “No, you’re missing the point. You’re not going to be seeds, you’re going to be flowers!”

What you sow must die before it is given new life; and what you sow is not the body that is to be, but only a bare grain, of wheat I dare say, or some other kind; it is God who gives it the sort of body that he has chosen for it, and for each kind of seed its own kind of body. (v36b-38, NJB)

Paul then has a brief interlude talking about bodies, and again we’re going to need to stop and pause to make sure we’ve understood him correctly.

He starts by saying: “Not all flesh is the same flesh.” The Greek word that is translated here as “flesh” is sarx. Sarx gets used by Paul in many different ways. Sometimes he uses it in a very negative way, directly contrasting the flesh with the Holy Spirit, such as in Galatians 5. It’s very easy for us to read passages like these and think that Paul bad actions come from the body and therefore the body is bad.  No. When Paul talks about the flesh, the sarx, he’s talking about what is perishable. That is, what is subject to decay. [Body, p65-67]

In Galatians 5, Paul’s point is that works of the flesh such as murder, rage, idolatry, are perishable; they will not last. I wrote more on how he uses sarx in Galatians 5 in another post here.

However, here, in 1 Corinthians 15, he is using the same word, but in a very different context. Here, he uses it much more in the sense of flesh-and-blood, and to support a very different point.

Clearly, Paul is building to a bigger point later on; meanwhile he’s setting up the idea that different bodies have different kinds of glory. As Paula Gooder writes (emphasis mine):

The glory of a being, whether it be God, heavenly bodies, earthly bodies, the sun, moon or stars, differs depending on who or what they are and on their own particular context. The glory of our bodies is … connected to being who we are called to be in our context. [Paula Gooder, Body, p56]

Aha! Let’s piece these ideas of glory and context together with what Paul said in the preceding verses: our bodies in the resurrection life will have a different context and a different kind of glory to what we know now. It would seem that Paul felt the Corinthians’ question was absurd because they were trying to match our current context and glory with our future one — which doesn’t work.

Hence his comparisons in the next couple of verses:

The message here seems to be that although there is continuity between our bodies now and our bodies in the resurrection life, there is also radical discontinuity. What we know now is different with what we will know in the resurrection, just as a seed growing in the ground is different from the flowers it produces above ground (though the genetic code is the same). As such, just as Paul warned the Corinthians, we need to be careful as to how much we make comparisons between now and then.

Actually, this is a particularly important issue for today’s discussions around disability and identity. In case the tact in Paula Gooder’s earlier quote passed you by, resurrection should not be used perpetrate an ableist ideology. If you want to describe the resurrection life, or the resurrection body, “able” and “cured” are often not the right words. Instead, I’d be inclined use words like these: “reconciled,” “whole,” “integrated” — along with “glorious,” “beautiful” and “full of joy.”

OK, whilst part of me would love to end this post on a tantalising cliff-hanger, I don’t want to leave readers in any doubt. Yes, an unashamedly good and embodied life is Paul’s vision of the resurrection life — and it’s unambiguously where he’s been leading up to now.

However, if you’ve read verse 44 you’ll know that seems to undercut everything he’s said so far. It doesn’t but… we’ll pick that up in the next and final post of this series.