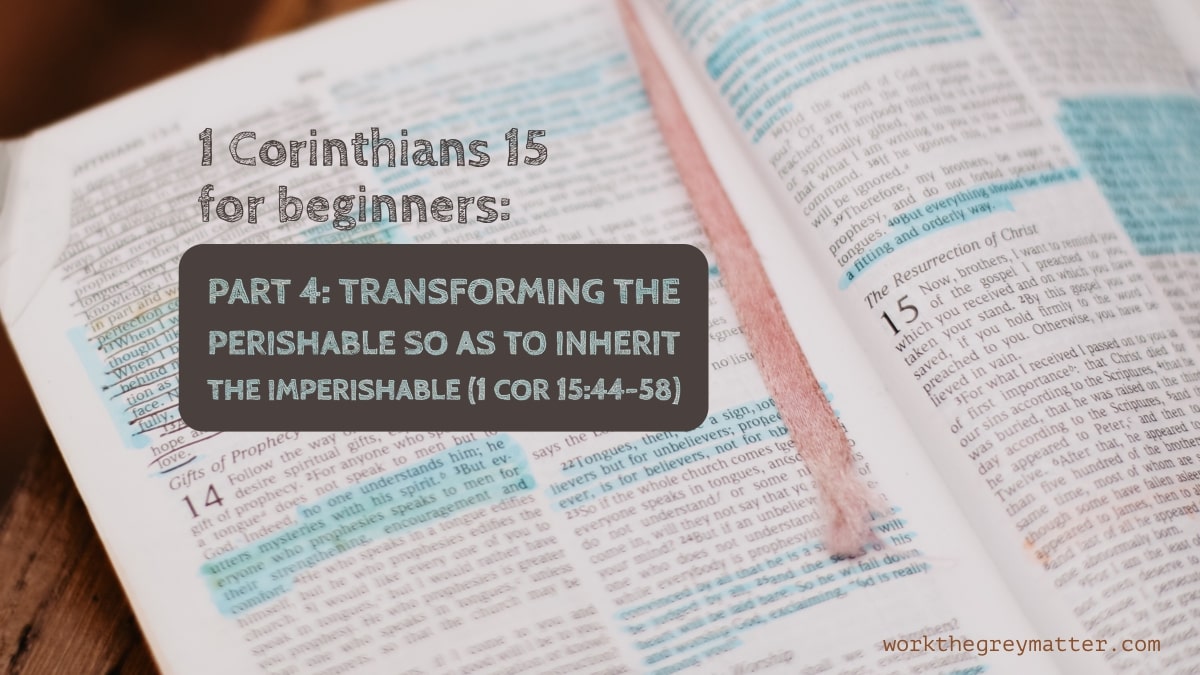 Welcome to the final part of my four-part series sweeping through 1 Corinthians 15 on the subject of resurrection. You can read part one here, part two here and part three here.

In verses 1-11 Paul established that Jesus rose from the dead — an event in the historical past. In verses 12-23 Paul explained that Jesus resurrected before everyone else because he was a ‘first-fruit’ and that everyone else will follow, collectively, in the future. In verses 30-34 Paul acknowledged that his ministry looked like a failure if you just considered success in present terms, but still he works to anticipate future resurrection in the here and now. Then, in verses 35-43 Paul turned his attention to how the glory of the future resurrection body is better than the glory of our current bodies.

My last post ended with a series of contrasts that Paul drew between our current and future bodies, likening the former to a seed in the ground and the latter to a plant. We’ll pick up things up there.

Except that Paul adds one more contrast:

what is sown is a natural body, and what is raised is a spiritual body. (44, NJB)

Wait, what? What does he mean by ‘spiritual body’? Isn’t that an oxymoron?

This is one of the most mistranslated and misunderstood verses in the New Testament. The NRSV translates it as follows:

“It is sown is a physical body, it is raised is a spiritual body.”

This translation belies the fact that many modern readers understand the word ‘spiritual’ to mean ‘intangible’. But that’s not how Paul understood or used the word.

This use of the word “spiritual” is true not just of future resurrection but also of Jesus’s resurrection body — it was powered by the Holy Spirit but also physical; he could touch the disciples and he could eat. And yes, we know that locked doors didn’t seem to be a problem for him, but what that suggests is not so much that Jesus wasn’t physical, but rather that his context wasn’t a hindrance for him.

Tom Wright’s own translation of these verses in the New Testament for Everyone is this:

– this is the tricky verse –

Paul’s point about the ordinary, natural life is not that it’s morally bad, but rather it’s like how God created Adam – who was the first man. In contrast, the spiritual life is like the resurrected life that Jesus has.

This is the point that Paul goes on to make as he talks about Jesus, referring to him as the “last Adam” or the “second man” in verses 45 to 49:

It’s very easy for us with our ‘inner Plato’ (see part three) to interpret these verses as referring to a life after death where the body dies and the spirit or soul lives on.

We need to remember though that Paul would have been familiar with similar beliefs during his day, and he didn’t share them. For one thing, when you look at how he uses the words “body” and “soul” in the New Testament, it’s clear that he did not think of people as having an intangible soul or spirit that could live separately from the body. In his understanding, a person’s will and mind, were intertwined with the body. For another thing, the idea of a life after death without the body did not describe the completely alive life that he envisaged in resurrection.

Or to put it a different way, if the body stays dead, death is not defeated. But Paul has made it clear that the last of Christ’s enemies that will be done away with, is death itself.

So what do we make of these verses?

When Jesus stood before Pilate, he said his kingdom was not from this world. That is not the same as saying his kingdom is not for this world. The kingdom of heaven, is most definitely for this world, it is just from heaven. Similarly with our bodies, we hope for a body that is from heaven, but most definitely for the created, tangible realm that is the earth. (Bear in mind, the end state in Revelation is one where heaven and earth are united.)

Paul using that word sarx again (again, see part three) as he talks about our perishable flesh and blood. He isn’t saying that bodies are bad, or that resurrected life won’t be physical. He’s saying that we need the imperishable body that is from heaven to be given to us from God; then we will be able to inherit an imperishable life.

Paul describes this idea multiples times in the New Testament, using the image of clothing, like we are to “put on” our resurrection bodies; it’s important to think through this image.

If God has a heavenly body in store for us – which is how Paul puts it in 2 Corinthians 4 – what Paul means, is that there is a body that will be given to us, not as a substitute or replacement for our current bodies, but as something more akin to a garment. In Jewish thinking, nakedness was associated with shame, disgrace and weakness. So when Paul writes that we will be clothed with immortality (as he does here — notice below his use of “put on”), there are many layers of meaning, including reconciliation, peace, strength and glory.

Approaching the finale: verses 51 to 57:

The ‘sting’ of death is sin, and the power of sin is the law. But thank God! He gives us victory, through our Lord Jesus the Messiah. (NTE)

Now you might think that Paul would finish the chapter there. But he doesn’t. Because the truth he has been expounding is not just a truth about the future. It’s a truth about the present significance of what we are and do.

As Tom Wright puts it (emphasis mine):

On the contrary. It is a matter of the greatest encouragement to Christian workers, most of whom are away from the public eye, unsung heroes and heroines, getting on faithfully and quietly with the God-given tasks, that what they do ‘in the Lord’ during the present time will last, will matter, will stand for all time. How God will take our prayer, our art, our love, our writing, our political action, our music, our honesty, our daily work, our pastoral care, our teaching, our whole selves – however God will take this and weave its varied strands into the glorious tapestry of his new creation, we can at present have no idea. That he will do so is part of the truth of the resurrection, and perhaps one of the most comforting parts of all. (Tom Wright, Paul for Everyone, 1 Corinthians, SPCK, p227-228)

And so we have the final verse, verse 58, of this magnificent chapter:

So, my dear family, be firmly fixed, unshakeable, always full to overflowing with the Lord’s work. In the Lord, as you know, the work you’re doing will not be worthless. (NTE)

At the beginning of this series I said the following: