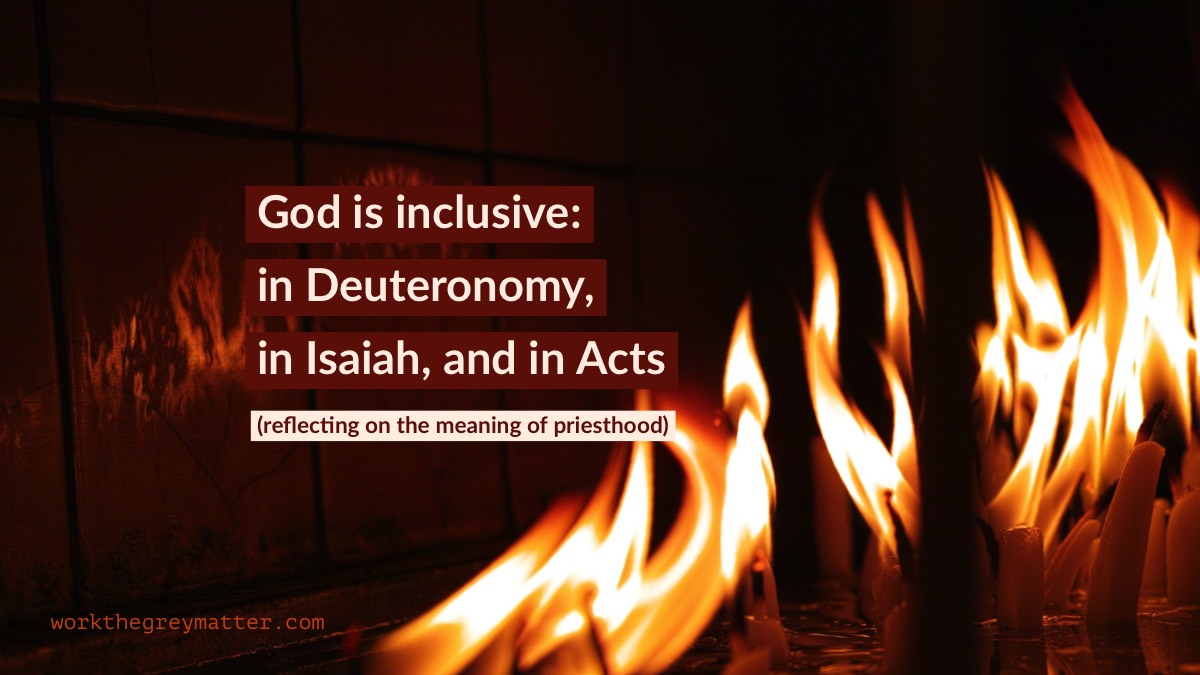 So, this is the season of Pentecost. In the Christian calendar, it’s when the church celebrates the coming of the Holy Spirit and the full inclusion of Gentiles as children and heirs of the promise God made to Abraham, way way back when. (See Galatians 3:29 or, like, the book of Romans.)

Although the story of Acts chapters 1 and 2 was familiar to me growing up, I don’t think I quite appreciated how radical the idea of Gentile inclusion was for the early church. Instead, the narrative was gutted to a simplistic “law bad, faith good.” This anti Old Testament law sentiment never sat right with me but, more to the point, this version of the gospel meant that the story of Acts never challenged me to be inclusive in my theology.

Instead, that lightbulb moment came when I better understood Isaiah 56. So, in this post I’m going to talk about how I think priesthood relates to inclusion, and how I reconcile the apparent contrasts between Deuteronomy 23:1 and Isaiah 56:4-5.

Isaiah 56 is one of my supremely favourite passages in the Bible.

It is a poem about radical inclusion, lifting people to a priestly level of intimacy with God, even when they were ‘other’.

Bear in mind, ancient Israel was a collectivist culture where continuance of the family line (of Abraham) was a big part of how people understood hope. So, in their terms, the people who were ‘other’ were eunuchs and foreigners. (And barren women, per Isaiah 54, but I’m gonna leave that aside for now.)

As Isaiah writes in verse 7:

All these I will bring to My holy mountain
And make them joyful in My house of prayer.
Their burnt offerings and their sacrifices will be accepted on My altar;
For My house will be called a house of prayer for all the peoples.” (AMP)

This was a big deal because the priestly office was exclusively for the house of Aaron. Not other Levites, not other Israelites and definitely not foreigners.

Meanwhile, Deuteronomy 23:1 had strong things to say about how eunuchs were not to approach the altar to present offerings, even if they were from the house of Aaron.

So now we have the question: was God changing his mind? Does Isaiah 56 go against earlier regulations?

And the answer is both yes and no.

The times and context of Deuteronomy

Deuteronomy is a book of law. It frames itself as being written by Moses (after the Israelites had left Egypt), but probably it was written in the late monarchical period (Josiah’s reign) and it built and innovated on pre-existing laws in Exodus, Leviticus and Numbers. So, for example, in Deuteronomy 23:1 the prohibition on eunuchs serving in the temple echoes that in Leviticus 21:16-19.

Now, one of the big themes of these books is how to worship God and how not to worship God. And it might seem a face-palm thing to have to say, but these books major on how God doesn’t like self-harm and human sacrifice in worship. People still did these things anyway but, according to the Bible, God was mega not happy about it (per Jeremiah 19:5 or Jeremiah 32:35).

We can’t forget all this when we read Deuteronomy 23:1.

Now, I do appreciate there’s a whole heap of stuff in the books of law that needs wrestling with. I’m not here to sanitise the Torah or guilt people for feeling uncomfortable when they read it. But that’s not what I want to talk about in this post.

Instead, the point I want to make is this: if castration was a practice associated with worship, then you can see why it would be a good thing to draw a line in the sand and say, “We’re not going to do this to worship YHWH.”

The times and context of Isaiah

Isaiah is a book of prophecy. Its writings concern themselves with periods in Israel’s history that span over 100 years. Some people say this is because Isaiah was a prophet and could see the future; others say it’s because the book was written by more than one person.

To be honest, I’m in the latter camp; it was established practice in ancient Israel to attribute your work not to yourself but to a previous great prophet. So, for me it doesn’t lessen the authority of scripture to say the book was written by more than one person.

For the record, the Persians allowed the Israelites to return to Judah and Jerusalem, but only a few went back. Meanwhile, the Persians had a habit of conscription – and for some men that meant forced castration.

Now, remember what I was saying earlier about how ancient Israel was a collectivist culture where continuance of the family line was a big part of how people understood hope? OK, so, imagine what it would mean to you with that mindset, living in a foreign country, and being conscripted and castrated by a foreign leader.

Not good. Very not good.

But into this context, Isaiah said that eunuchs could serve in God’s house and he would give them a name “better than sons or daughters” (Isaiah 56:4-5).

How awesome is that?

Did God change his mind then?

When we bring Deuteronomy 23 and Isaiah 56 side by side, it strikes me that whilst there is certainly development of thought and ideas, there is also a lot of continuity.

Nothing in Isaiah 56 suggests that bodily harm is what God wants in worship. Neither does it undermine the importance of God’s holiness.

But with God’s official invitation extended to eunuchs, there is a meteoric shift in how we can understand hope.

Now for me, this isn’t inconsistent with how I read Deuteronomy. It’s a development, for sure, and it teaches something new. But could we ever believe that God only wanted relational intimacy with only one family line, from one tribe, from one people? Um, no.

And let’s be really clear on this.

The priesthood was an institution that served a number of good purposes and, in a visible, tangible way, it illustrated humanity’s ability to relate to God. It teaches us about God, how he works in history, and aspects of worship that he does and does not consent to.

But priesthood was never a hierarchy of belovedness. And whilst that might seem obvious (most Christians believe God loves everyone equally) it seems we still miss the full implications.

You see, God didn’t give the priesthood to the Aaronites because he’d designed that family with innate attributes that meant they, rather than anyone else, were “better” priests. No, he gave it to them as a gift. And yes, he got hacked off when people from other tribes got entitled and tried to take that gift for themselves – but the issue at hand is how God wants to be worshipped and related to. That means the ethics here are not about God’s design, but rather God’s consent.

In other words, it’s perfectly possible, outside of the Aaronic institution, for God to give that same gift of priestly office to other people – even ‘other’ people. And Isaiah proclaimed exactly that.

When you boil water, it’s too hot to drink. But boiling water is consistent with, and contributes towards, the overall aim of brewing and drinking a cup of tea. In a similar way, I see Deuteronomy and Isaiah as giving a consistent revelation of God; their difference is that they occur in different points of space-time – and if you ask me, even that difference shouldn’t be overstated.

Isaiah’s message is that God overtly invites people who are ‘other’ to approach him. But his prophecy is hardly the first time that God has called to people who are oppressed and struggle to see a future for themselves. No, that theme was long-established. Even God’s covenant with Abraham was not that his descendants would be blessed, but that all peoples would be blessed through his descendants (Genesis 12:3).

What we need to recognise is simply this: bringing outside people inside is what God does on earth. And helping God with his great work of inclusion is the essence of priesthood.

So, if I’m going to look at Deuteronomy and then Isaiah and then Acts, I need to ask myself questions. Who are the people I have thought of as ‘other’ or in need of ‘fixing’? Have I tried to imagine how God might reveal a new picture of hope through their inclusion?

Because when you start to think in those terms, two things become more and more apparent. One, God’s goodness never, ever changes. But two, we are always learning about what his goodness means.

“Even you who are bad know how to give good things to your children. So surely your heavenly Father knows how to give the Holy Spirit to the people who ask him.”
– Luke 11:3 (ERV)