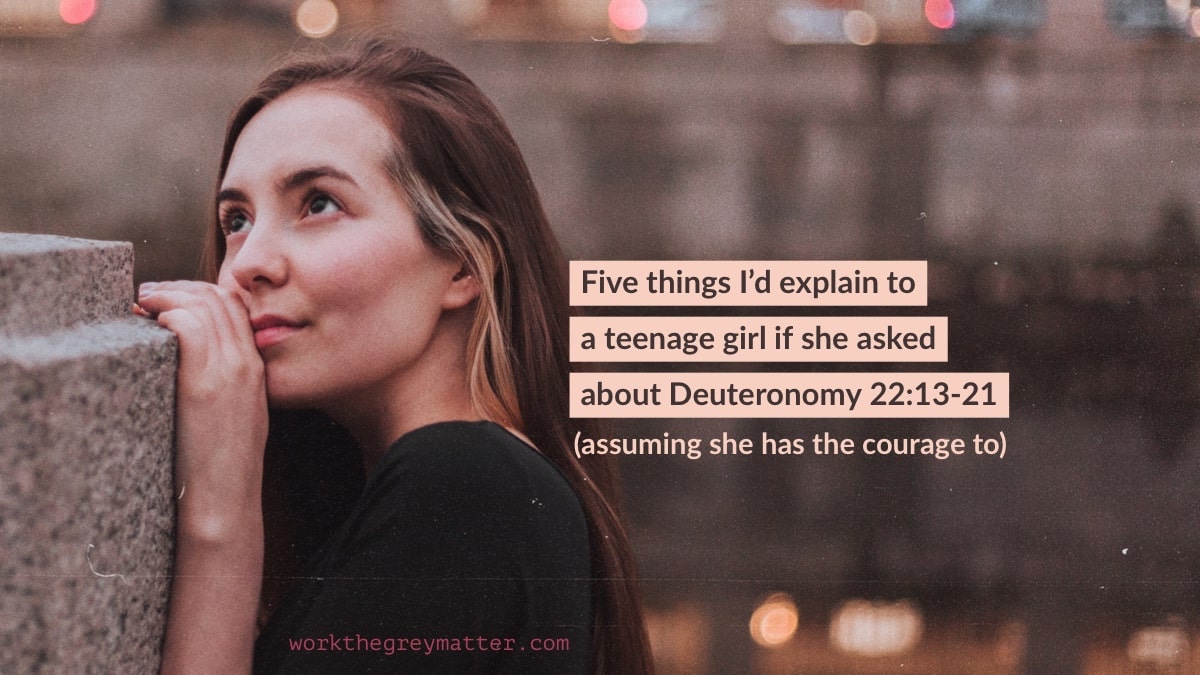 This would be that law about the young bride who’s already lost her virginity.

Actually it’s not, but I’ll get to that later.

I promised myself I’d keep this post under 1,200 words: 200 for each thing to say, plus intro. So if you want detailed backup for what I’m saying here, check out the links and references for further reading. I’m drawing mainly on the work of Aaron Koller, Carolyn Pressler, Joseph Fleishman and, not least, Emily Nagoski.

I’m writing this post because in the Western evangelical church, Christians of all ages are encouraged to read the Bible, although there are some pretty puzzling things in it. And whilst it’s pretty standard to say “Jesus won’t mind if you ignore that bit,” if you’re talking to a teenage girl who’s anything like me, those arguments won’t wash. (Admittedly though, I’m pretty weird.)

I grant you, even if she’s grown up with purity culture, Deuteronomy 22 probably didn’t feature much in conversation. But it’s still likely she’ll completely misread the passage (as I did) if she reads it from a purity culture mindset.

So, here are five things to explain. Take it slowly and gently.

END_OF_DOCUMENT_TOKEN_TO_BE_REPLACED

Making a financial success of a new book is not an easy business in the age of the internet, especially if you’re writing for a niche market through a small publisher. So I can understand the desire to market your work wherever and whenever you can, milking the social media machine for all its promotional worth.

That being the case, I’m not really against Canon Press making short videos of Rachel Jankovic espousing her gospel of obedience whilst she peels potatoes and answers her scandalizzzed critics. Hey, if I had a new book to promote, I’d love that kind of support from my publisher.

But what should we be making of these videos? How should we react when she derides Beth Moore and the “encroaching feminism” that dares to suggest women can and should preach in the pulpit? Should we be angry, frustrated? Should we watch or boycott? Should we analyse or parody?

Ultimately it’s for each of us to answer those questions for ourselves. In this post though, I’ll tell you what my answers are, and why in the hope that they’ll help stimulate you in your analytical thinking. END_OF_DOCUMENT_TOKEN_TO_BE_REPLACED

John MacArthur was recently asked what he thought of Beth Moore. In addition to telling her to ‘go home’, he said: “There’s no case that can be made biblically for a woman preacher – period – paragraph – end of discussion.” (Video here.)

[For those less familiar: if you want a flavour of the more recent controversy around Beth Moore, try reading this Church Leaders article from May 2019: Beth Moore Has Had Enough of ‘Sinful’ Evangelical Misogyny. John MacArthur is on Wikipedia here.]

This ‘no case that can be made biblically’ statement has got me scratching my head a little. I mean…

Before Zelophehad’s daughters, there was no scriptural case for daughters inheriting. (Numbers 27:7-11) END_OF_DOCUMENT_TOKEN_TO_BE_REPLACED

What I blog about and what I want to blog about, do not always align.

The Old Testament laws on sex, adultery and rape, particularly those in Deuteronomy 22:13-29, are a sensitive topic to say the least. Whenever I find an angle to write about, my inner caution tends to apply the brakes before my enthusiasm gets to the point of posting.

It’s not that this is a topic to be enthusiastic about, per se. It’s just that, in the last few years, the biblical scholarship I’ve read on these passages has absolutely blown my mind. And the more feminist literature I read (currently working through Jessica Valenti’s The Purity Myth), the more I believe the church needs to re-evaluate its relationship with these verses. Because although these verses are steeped in patriarchy, I’ve come to believe that there’s a lot of good stuff that they can teach us today.

If you’re now raising your eyebrow at me, I’m gonna guess it’s for one of several reasons. I’ll take them in turn. END_OF_DOCUMENT_TOKEN_TO_BE_REPLACED 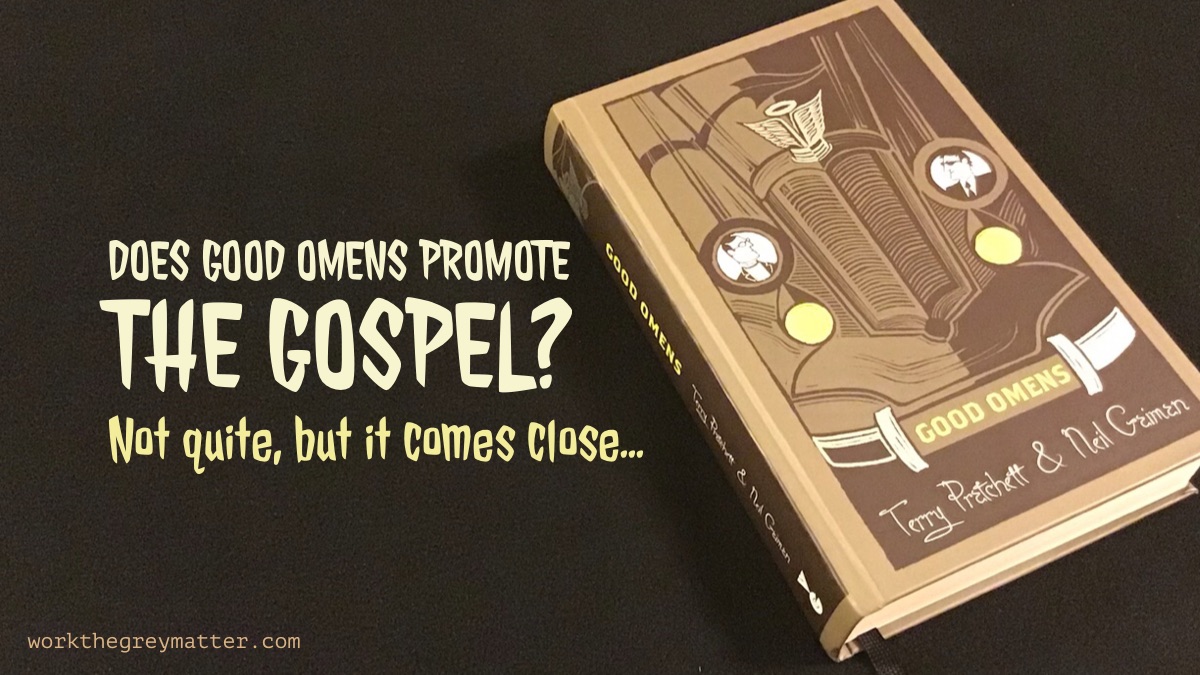 This is the second of a pair of posts about Good Omens. I’ll start with a quick recap of where I got to in the previous one, and don’t worry, this post is half the length of its predecessor.

There was this bit:

We should appreciate then that the story is about misfits trying to change the establishment, far more than any modern concepts of witchcraft. In fact, all the heroes, by their very nature and identity, transgress the bounds of acceptability in one way or another.

The question for critics, if they can concede that Good Omens is a good piece of storytelling, is whether its transgressive core is against Christian belief. Because let’s face it: disobedience, mischief and rebellion aren’t exactly renowned Christian virtues.

OK, let’s get stuck in. END_OF_DOCUMENT_TOKEN_TO_BE_REPLACED 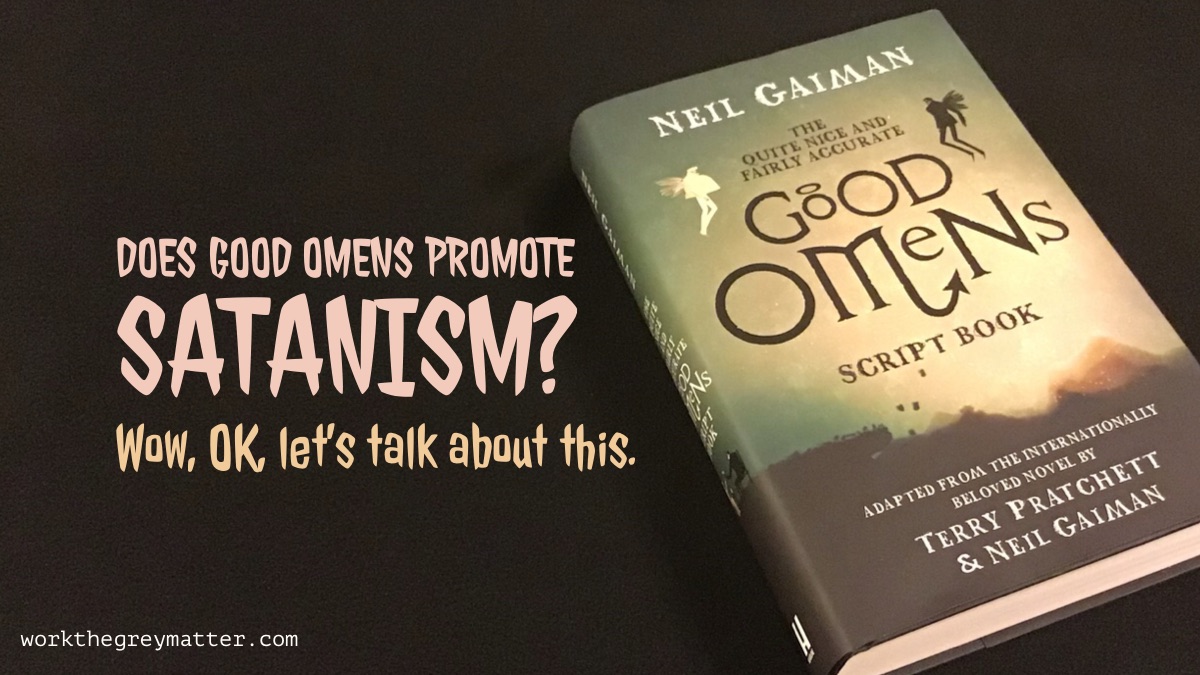 It’s easy to guffaw when a bunch of anxious conservative Christians launch a petition calling for Netflix to cancel a popular show. Especially when that show, the recent adaptation of Terry Pratchett’s and Neil Gaiman’s book Good Omens, was actually a joint work from Amazon and the BBC.

But if we can reasonably assume that these concerns will persist even in the face of Netflix’s promise not to make any more, let’s ask the question in all seriousness: does the show make Satanism ‘appear normal, light and acceptable’? Does it mock God’s wisdom?

In my habit of writing long posts, I’ve split this one into two parts. Part 1 digs into the genre of Good Omens and what that does and (more to the point) doesn’t say about Satanism. In Part 2, I focus more on the faith angle, looking at the theology of challenging norms and asking how closely Good Omens fits with this. END_OF_DOCUMENT_TOKEN_TO_BE_REPLACED