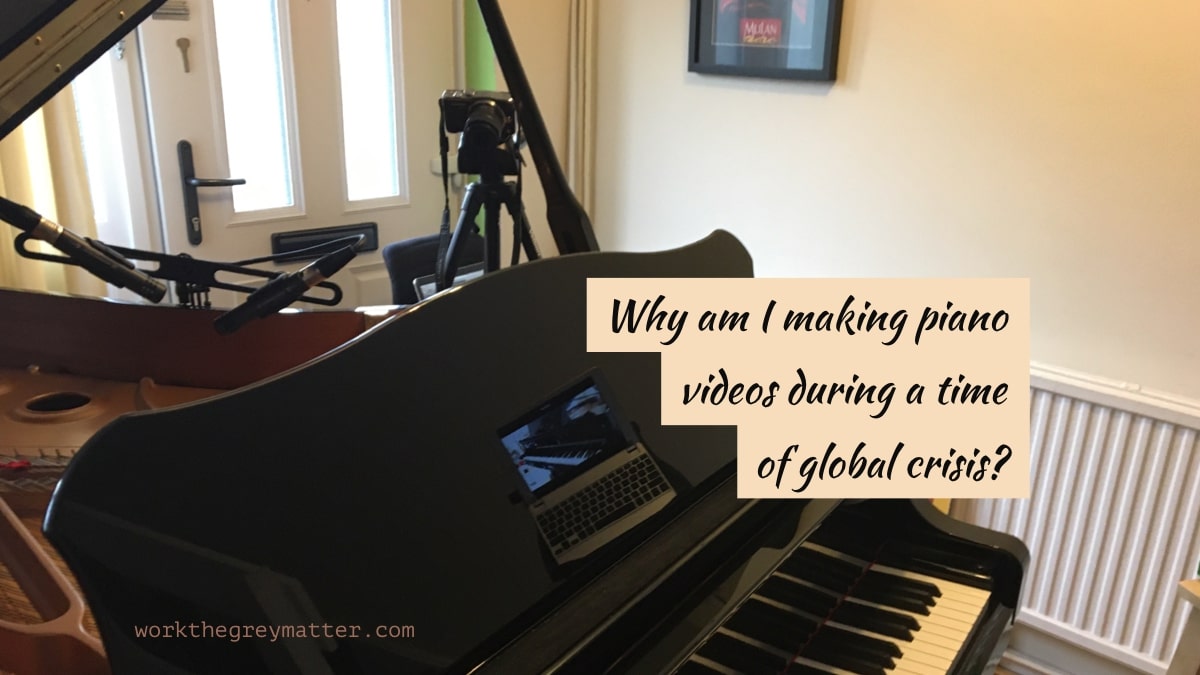 Yesterday I spent the whole morning setting up the living room.

Oh — and I did a few practice runs before hitting record.

Before Coronavirus, yesterday had been fully booked; playing the piano would have been off the cards. As for spending most of the day setting up a recording studio in my living room, that would have been out of the question.

If you’re reading this, you might be looking at me with a raised eyebrow, thinking, “But you wrote this blog post…?”

After I played the piano.

When the first reports broke from China, about how they had set up new hospitals and imposed a quarantine in Wuhan, my husband was pretty savvy about what this would mean for the rest of the world.

When friends went overseas in February, he said they might end up being trapped out there. They’ve since had to rebook their flights back.

When friends offered to pay for their share of the West End trip planned in May, he said not to bother until we knew what refunds we’d get if the show was cancelled.

By 10th March he’d told me he’d like me to start working from home. Two weeks later, my employer has made that mandatory.

All of which is to say that whilst my husband is far from infallible, he’s also been the most reliable source of information about “What’s going to happen next” in my vicinity.

And in the next few months, he reckons we’re seriously going to need the arts.

Being a historian, he recently read a book about the siege of Leningrad during the Second World War and how Shostakovich wrote his seventh symphony. As Wikipedia puts it:

The composer wrote the first three movements in Leningrad and completed the work in Kuibyshev (now Samara), where he and his family had been evacuated. It remains unclear whether Shostakovich really conceived the idea of the symphony with the siege of Leningrad in mind. It was officially claimed as a representation of the people of Leningrad’s brave resistance to the German invaders and an authentic piece of patriotic art at a time when morale needed boosting. … The most compelling performance was the Leningrad premiere by the Radio Orchestra in the besieged city. The orchestra had only 14 musicians left [surviving the famine caused by the siege], so the conductor Karl Eliasberg had to recruit anyone who could play an instrument to perform.

The best source of musicians was the military so they pulled people from the front lines to attend rehearsals. And then, once the day had passed when Germany had expected to defeat the city, they performed the symphony.

And for many of us, the arts are our gateway to hope.

Don’t get me wrong, art is not hope itself. But it can be nourishing for us as it gives expression to our fears, anxieties and dreams. It can call us to remember things we’d forgotten. It can make us laugh. It bring us perspective.

And yes, we’re going to need these things.

Like many other people, I’ve been sucked in to the whirlpool of news. It’s hard to pull away from that and find solace. And for many of us, that isn’t something we can afford to do because the situation is moving so rapidly — we’re in a period of flux. It’s when the new normal takes hold, whatever that looks like, that we’ll really find ourselves reckoning with our new realities.

In many ways, I feel ashamed that I’ve not been able to write. I don’t have dependants to care for or to homeschool. I don’t have a fractious relationship with my spouse. I don’t struggle with anxiety or depression. I have a stable income. Even if I get ill, the odds are pretty good that I won’t need hospital treatment. I’m a naturally introverted person so like, what is there for me to adjust to?

Honest answer, I don’t know. But I’m done tearing myself apart trying to answer this question.

Here’s what I know: I want to curl up in a ball, I want to light a candle and pray, and I want to sing. The first two I can do and have been doing. The latter I can’t. At least, not yet.

But knowing that I want to sing is what has pulled me back to the big question, “What can I do now?”

I mean sure, there are initiatives popping up, connecting people with local helpers and online resources. Yes, I’ve dropped flyers to my neighbours saying I can help pick up their shopping if they need to self isolate. Yes, I’m making a point of buying stuff for the local food back whenever I see tins on the shelves at the supermarket. Yes, I’m only buying what I need (well, aside from food bank stuff) and I’m staying away from people.

But in my head that isn’t doing anything; it’s just the basic standard of being a marginally decent person in the chaos that is Covid-19.

When I stand back and think bigger, the thing I come back to again and again is making good art — be that visual art, music, poetry, dance, theatre, whatever.

Strangely, this is a theme that’s been on my mind for a while. I’ll probably need to save those thoughts for another post. But I figure in the meantime, I can start with music at home.

I was privileged to have piano lessons from age 6 to 18; when I was 15 I had the opportunity to throw all my savings (plus an unexpected windfall) towards buying a Yamaha C3 grand. I don’t play it nearly as often as I should, but with all this home working, my opportunity to do so (whilst not annoying the neighbours) has increased dramatically.

So, that’s been me this last week. I couldn’t write, I still can’t sing, but I can play. So I’m going to play.

I’ve scaled my mountain of self-doubt that says doing this is just a gross indulgence of privilege, that the music I make is cringe-worthy, and that I don’t have the sound-engineering know-how to produce something that translates well through tiny speakers. My sense of “I don’t care if it’s not perfect” has overcome my reticence. I’ve managed to record about eight hymns and classical piano pieces, and I’ve put the first two on YouTube to cater to the Christian and the non-Christian crowds.

I hope that they are droplets of beauty in your day.

But more than that, may you find in them precious moments of space. May you come away with more wherewithal about what you consume, and a reignited imagination for the art that only you can make.

PS I haven’t been promoting my YouTube channel much, but it does exist; also, when a video is me talking about sex/consent, I’ve restricted it to over-18s.

I heard the voice of Jesus say, to the tune of Kingsfold (lyrics on screen, but the track is instrumental only) https://youtu.be/wX6y2ch6Ml0

And Scarlatti’s Sonata in B minor https://youtu.be/xv_3fm-tgiQ