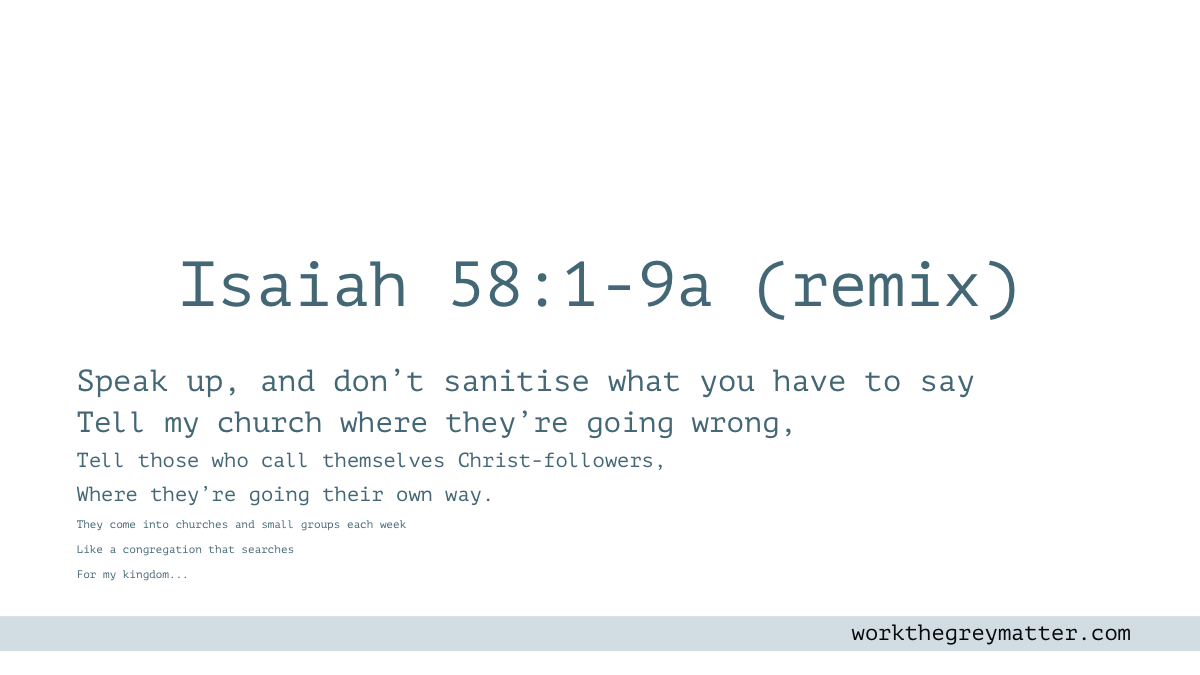 Like many of the Old Testament prophets, Isaiah spoke about injustice, calling the people of Israel and Judah to account for their actions and appealing to them to change their ways. And I know it’s a cliché but: many of his words, written hundreds of years ago, are deeply resonant today. Things like ending oppression and showing hospitality to the poor.

The thing is though, many Christians reading this passage would frame themselves as being in Isaiah’s shoes; they would use his words to call non-Christians and other parts of the church to account. Yet there comes a point when you can’t escape the fact that at least some Christians are wrong to claim the moral high ground. At least some Christians must be campaigning for causes which aren’t actually just.

And this is a message that speaks to all sides of the political divide. Because the problem is not just campaigns with an unjust purpose; it’s also campaigns that have good intentions but which (a) are ineffectual, (b) use dubious methods, and/or (c) are unnecessarily divisive.

So, with that in mind, I wrote an alternative ‘remix’ version of these verses to raise a contemporary challenge to the church. I want to get us thinking about the methods we use in our activism, and what it is that produces lasting and fruitful results.

I hope the words speak to you. Maybe they’ll encourage you or challenge you in your own practices; maybe they’ll help you understand and articulate something (whether good or bad) about someone else’s practices.

Something I’ve come to understand, is that the Holy Spirit never inflicts shame. These words aren’t here to pressurise you or make you compromise necessary boundaries; so if they jar, maybe they were written more for someone else. But if they nudge your awareness and challenge you to think differently, maybe it’s worth letting the words sink in.

Oh, and one last thing: Isaiah is one of the ‘major’ Old Testament prophets, because the book written in his name is one of the longest books of prophecy. In chapter 6, there’s an account of Isaiah’s calling; he saw heaven open and God asking who he would send to give a message to Judah. Isaiah’s response was “Here I am! Send me!”

Yeah, so, keep that in mind.

They come into churches and small groups each week
Like a congregation that searches
For my kingdom and its righteousness.
They ask me to intervene in response to their prayers,
Claiming their faith is truly spiritual.

“Why have we donated to good causes,” they say
“And you haven’t noticed it?”
“Why have we protested and stood out from the crowd,
Yet you don’t seem to care?”

OK, listen: on the day you preach and campaign,
You do it just so you can say you did something.
You don’t even stop to consider
Whether your methods are even ethical.

The truth is, your activism is an excuse
To express disgust and be argumentative,
To wash your conscience on the moral high ground.
You cannot act like this if you want
My Spirit to breathe through you.

Is this the righteousness that I want?
To pick out ideal victims and idealised causes
And put your words on repeat inside an echo chamber?
Is it to protest that you’re being persecuted
When people challenge the accuracy of what you say
And the helpfulness of how you say it?

I delight in activism that lifts the voices of those
Who have been falsely discredited or sidelined;
I desire activism that makes it easier, not harder,
For professionals to improve the structures
Of the organisations they are already working in;
I take pleasure in careful sifting through the evidence,
To provide an approachable answer for misunderstandings
and to silence the myths and the lies.

Share your energy with those
who are hungry for encouragement;
Include lesser known causes within your sphere —
Yes, those that lack political glamour;
And muster the courage
for tempered and slow conversations —
Even with your family members who don’t feel like family.

Then Christ’s light will shine on you
And through you,
And your divisions will heal.
Your reputation for compassion and justice
Will precede you,
And the LORD’s revealing wisdom will watch your back.

Then, when you pray, I will answer.
When you call to me, I will be the one who says,
“Here I am.”