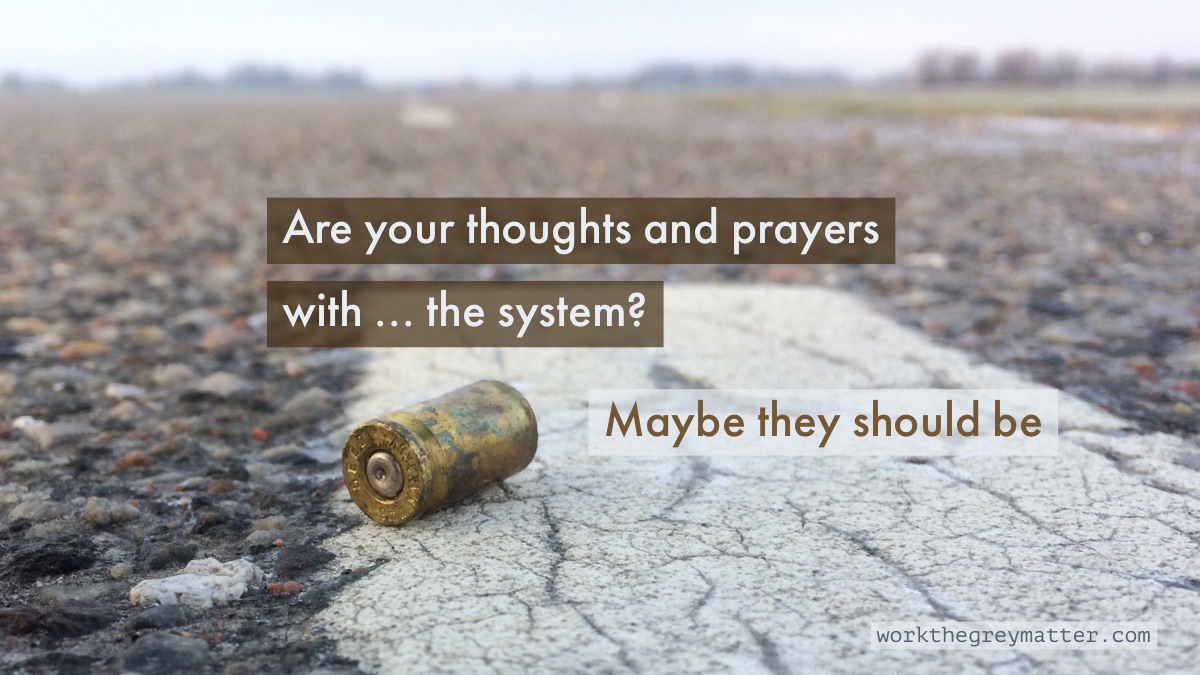 I’m grateful to say that gun violence is something quite remote from my experience and everyday life. The UK has tight gun controls and most of our police don’t carry firearms. I don’t think I’ve seen a gun fired, ever, let alone at anyone.

So, as I write this post, I’m going to do my best not to claim knowledge and understanding that I don’t have. However, how we pray and what we pray for is in my blogging lane, and I think it’s time I say something on this.

“When you say that, I know it means something.”

It was the day before my friend was about to return to the US. We’d just had an amazing week’s holiday, sightseeing around London and having deep conversations about the fundamentalist religion she grew up with. As you do. Whereas I was a Christian, she was an atheist — and deeply sceptical about how many Christians talk the talk but don’t walk the walk.

With the week closing she told me about her personal circumstances and her deep frustration with the politics of her country. As I listened all I could say was that — in a strictly non-preachy, non-manipulative, not-trying-to-convert-you way — that I wanted to be praying for her after she went back.

My words landed as they were intended. “When you say that,” she said, “I know it means something.”

I didn’t take her response lightly at all. I wasn’t naïve enough to think that she had suddenly converted; instead, I took it as a powerful testament to the strength of our friendship that I might utter the words “thoughts and prayers” without them jarring in her ears.

For the Christians reading this who, like me, believe that prayer is real and does something, you might wondering how or why “thoughts and prayers” have become so noxious to so many people.

This quote kinda sums it up:

“There is something deeply hypocritical about praying for a problem that you are unwilling to resolve.” – Miroslav Volf.

As I observe the US news and commentary from this side of the pond, it strikes me that this sentiment is particularly strong when it comes to mass shootings.

There are measures which might not resolve the problem entirely, but which many argue would reduce the problem significantly. So, when prominent figures say their “thoughts and prayers” are with the victims and their families, but they then take no action to introduce measures that would curb such atrocities — well, it leaves a bad taste, to say the least.

You don’t need to go far to find satire such as Roy Zimmerman’s song To the Victims of This Tragedy We Send Our Thoughts and Prayers (YouTube video here, original lyrics here) or the spoof website Thoughts and Prayers: The Game. Angry is an understatement.

Now, I’m not writing this to repeat that anger. I expect most people reading this will already have their opinions the legitimacy of that anger and its expression. The question I want to ask is about how we pray.

“I’m a Shooting Survivor. If You’re Going to Pray for Us, Here’s How.”

If you haven’t seen this piece by Taylor Schumann in Christianity Today then save the link and think about when you’ll carve out time to read it. It’s not long.

One of the things I like about the title is that it talks about how to pray. I don’t know what it is, but it seems to me that Christians often think they know how to pray or what to pray for, when… the reality is that all they really know is how to throw together a bundle of buzzwords starting with “Lord Jesus” and ending “Amen.”

Honestly, I’m not meaning to be cynical here; I know for a lot of people these prayers have good intentions behind them and I dare say God honours a sincere heart even if the words ring with cliché and guesswork. But, you know? I want my prayers to be better than that. Even Jesus’s disciples were like “Hey Jesus, teach us how to pray! You know, like how John the Baptist taught his disciples?” (Paraphrase of Luke 11:1)

Praying well isn’t something that happens by accident or in the abstract. It’s got to come from the heart, but that’s only going to happen if we have taken the causes that we pray for to heart. And that’s only going to happen if we take the time and make the emotional investment to sit with, look at and listen to the people who are affected by whatever it is we want to pray about.

For this reason, it’s incredibly important that we listen to people like Taylor Schumann, because they can give us insights that we wouldn’t otherwise have. For example, she says “Pray for shielding from photos and information of the shooter.” I’m not sure I’d have thought of that.

But the prayers shouldn’t end there.

Morality at the structural/policy level

A conjecture:
Doing what is moral on the structural/policy level is often, if not always, also what is more practical vis a vis a functional, flourishing, healthy society.

If we want to see peace on earth, we need to pray for justice and integrity on the structural and policy level. Otherwise, when we pray for victims and survivors, we’re praying for treatment of the symptom, rather than the cause.

And yes, OK, the root cause is a problem of our hearts and minds, and I know that you can’t legislate against that. BUT I also know that when organisational, political and legal structures are designed ethically, then they pave roads that make it easier for good people to do the right thing. Doing justice might not be enforced, as it were, but justice becomes normalised in a way that isn’t possible when the system is corrupt.

So, here’s an idea: we should pray for systems.

This isn’t a new idea, but I’m drawing attention to it because I hear it under-represented in Christian dialogue. Instead, our prayers of intercession seem exclusively focused on the ‘victims of this tragedy’.

To be clear, I’m not saying we shouldn’t pray for victims and survivors, we should. But the prayers shouldn’t end there. And I don’t just mean that we should take action to support and comfort such people (obviously we should); I mean we should pray for the system.

And take action to fix the system.

Some ideas to get started

If you’re short on ideas as to how pray for “the system” as it relates to mass shootings, here are a few to get you started. This list is what came to mind as I sat down to think about it, and I’m not even an activist in this area. So if you want or need more ideas, speak to them.

And then there’s the hearts and minds stuff:

Maybe some of the above bullets seem tangential or unrelated to gun crime, but we should recognise this is a web of interlinking issues. If people have been fed ideas of entitlement, if they believe in their deservedness to have certain types of stuff and date certain types of people, and they then don’t get what they expect… and then they’re fed a narrative that a particular group of people or politicians are to blame, and that forceful measures are how we set the world to rights — it makes for a very disenfranchised and dangerous person. Not someone I’d want to meet in a world where the barriers to obtaining lethal weapons have been minimised.

I honestly believe that a lot of this comes down to money and economic inequality. Good grief, when a Trump official revises the Statue of Liberty poem to say that people coming to the US shouldn’t “become a public charge”, it’s hard to argue that white supremacist paranoia isn’t being stoked by someone’s greed. And that’s before I get out my Bible and quote 1 Timothy 6:10 (‘For the love of money is the root of all kinds of evil’).

So, for the people of faith who read this, I hope that regardless of where you stand on gun reform in the US, this post has given you something to think about and ideas for what you can pray into and act on. I find that the more I pray about something, the more I have ideas on what I can do. And then the more I do, the more I want to pray about.

For me, not to pray is a betrayal of what I believe and who I believe in; that’s why I told my friend that I wanted to be praying for her — and fortunately she didn’t mind me saying this. I’m not sure what meaning or significance she attributes to my prayers given that she’s an atheist, but I’m guessing they only carry any weight with her because I as a person carry weight with her.

“Thoughts and prayers” doesn’t have to be something we give up on. But it does have to have substance, which means living our lives in an integrated way, seeing how issues interlink with each other, and taking actions to make a positive difference. Articles like Taylor Schumann’s show that parts of the church are earnestly looking to get better at this when it comes to victims and survivors. That’s great, but don’t let it stop there.

Pray for the system too, so that righteousness reigns on earth, as it does in heaven.

If you want to read something sobering, make it this article in The Atlantic: A Reformed White Nationalist Says the Worst Is Yet to Come.

I don’t have many posts that are on similar themes to this one, but if you’re interested in reading another contemplative post that talks about my friend’s visit, then there’s More than memories: why I am not afraid of losing our holiday to epilepsy. Or if you’re up for a more challenging post on how we pray, there’s this: Evangelicals can’t sanitise Vicky Beeching’s conversion exorcism as badly worded prayers.

I also made a meme out of the bullet points above, should you wish to share it: 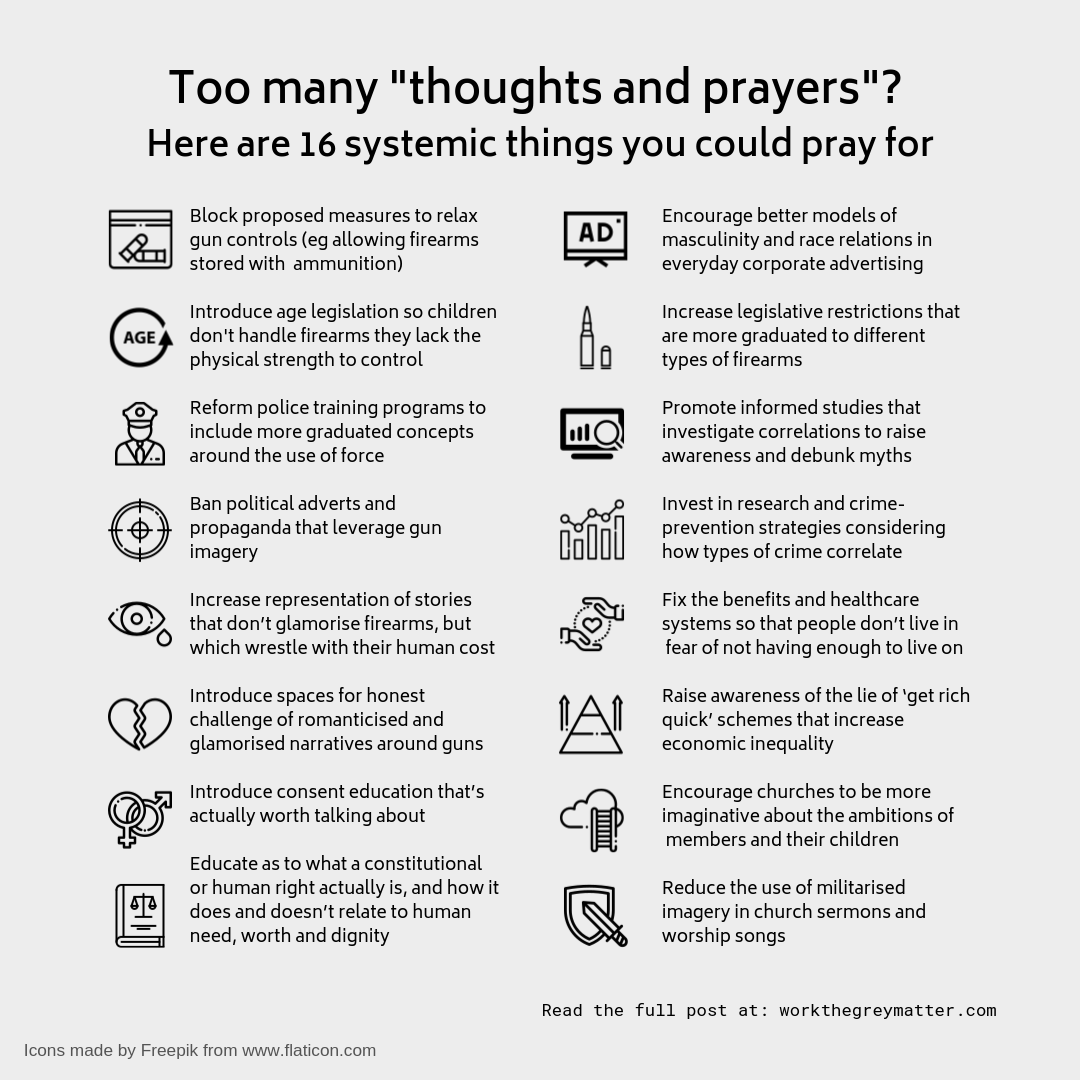