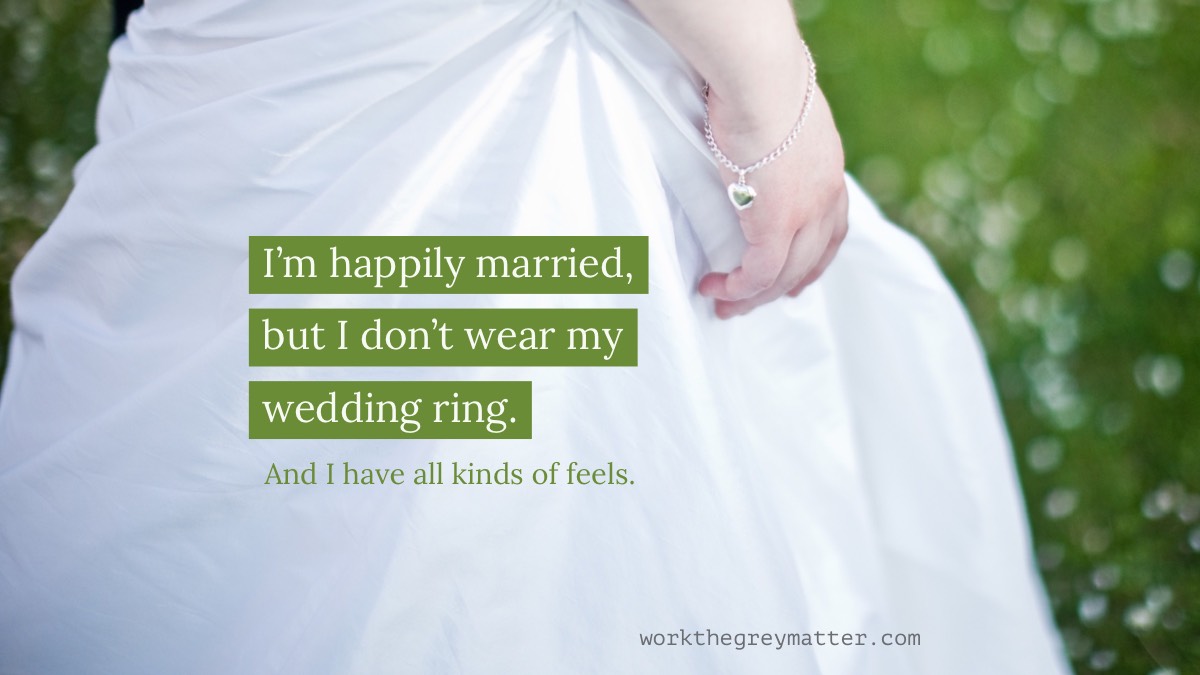 I just checked the photos from our 10th anniversary celebration last summer (that is, in 2019) and it turns out I was still wearing them then. But somewhere in the months since, I zipped my wedding and engagement rings into a pocket amongst my toiletries — and I haven’t worn them since.

As for what prompted this change in habit, I guess I just gave up waiting for my husband to wear his wedding ring.

You see, a few years ago the knuckles in his left hand flared up and it became painful for him to wear it. He’d had the issue in his right hand and after a few years that hand recovered. But with his left hand, the problem seemed to be worse and lasting longer. So, not through any lack of love for me or from me, he stopped wearing it.

And I guess I just got to the point where I thought, “Maybe he’ll never wear it again.” At which point, me wearing mine acquired an odd mixture of meanings.

I felt like I was enjoying something that he couldn’t, and I wasn’t sure I wanted that. Plus there was this hint that I was wearing the rings for both us. And I didn’t like that either.

I was probably reading far more into this situation than he was. He never seemed resentful, he never complained that he was missing out and he never remarked that the marriage was on my shoulders. Instead, he remained much as he ever was: bearing the relationship with me and tending it with the steadfast compassion and care that he’s always shown me.

But just because he didn’t read our circumstances the way I did, that didn’t mean there wasn’t something valid in how I was feeling about it all.

Don’t get me wrong – I have no interest in self-martyrdom. It’s not a needless case of, “If we can’t both have it, then neither of us can have it.” We’ve long had a practice of enjoying things individually, and celebrating each other’s opportunity to do so, even when that activity was something we’d have preferred to do together if that had been possible.

In other words, we don’t perform our togetherness; there was never a hint that I had to stop wearing my rings to prove I was in the same boat as my husband. (And I wasn’t anyway — my fingers were healthy.)

Again caveats: it’s not that I’ll never wear them unless he wears his. That’s not the point. The point is I just wanted to be alongside him.

Plus… all the reasons why I’d wear them for myself were gone.

I used to be quite invested in the idea of jewellery as an external marker of something important to me.

At university I thought about buying a pair of earrings and getting them engraved in a way that symbolised my belonging with God. Why earrings? Because of the slave-for-life imagery in Exodus 21:5-6. Obviously.

I moved on from that idea before I ever got any earrings. And it’s not that I have a theological problem with describing myself as a ‘bondservant’ of Jesus – Paul said as much of himself. But there felt something oddly incomplete about identifying with the slavery image/label on its own. What’s more, I couldn’t shake off the feeling that I would get the earrings just as a way of outperforming everyone else’s devotion.

I did however buy a silver bracelet and a heart-shaped locket to hang from the bracelet’s chain. I figured they were subtle enough that no one would be weirded out by them as a religious symbol, plus I could put write verses of scripture and put them inside the locket. Which verses? Why, the two greatest commandments in the Bible: Leviticus 19:18 and Deuteronomy 6:5. Obviously.

Except I didn’t take those verses on their own, I wrote out an amalgam of the Matthew and Mark passages where Jesus was asked what the greatest commandment was. (As in: Matthew 22:34-40 and Mark 12:28-32.) And I wrote them on a type of paper that would endure exposure to water, in teeny tiny handwriting with a pen that was very, very fine.

And I wore that bracelet for, I dunno… a decade? Thinking about it, it was probably a way for me to straddle my identity as both a Christian and someone who really has a thing about the Old Testament.

I guess I stopped wearing it because… because I felt like I didn’t need it any more. Like Dumbo not needing his ‘magic’ feather I suppose.

Plus, I originally bought it to tide me over whilst I contemplated committing myself to God as a lifelong celibate Christian. And, well clearly, that didn’t happen!

The message for me now

When I stop and look back, it seems that wearing jewellery as a sign of my relationship status (and the parallels with purity culture are not lost on me) had always been something I’d done mainly for me.

And yes, that me-orientation extends even to my engagement and wedding rings.

You see, rings are a nice idea and can be a beautiful gesture, but they’re also the Done Thing. There’s a social sense of missing out if you don’t have them. Plus, the jewellery industry makes it hard to buy anything without asking whether it’s suitably expensive. Counting carats is a sure-fire way to play the comparison game.

As for the day-to-day wearing of my rings, I had the primary benefit of looking at them. Plus, they never really signalled my marital status publicly; most people I met already knew I was married or just didn’t care. And of the few who could have usefully known I was married, they never bothered to look at my hand anyway.

So I’m ready to own the fact that my rings served me more than anyone else. That being the case, I’ll choose intentionally whether I wear them or not.

And right now, I don’t need reminders that I’m married or that I’m happily married. I know that full well – and I don’t take it for granted. Also, my life circumstances are pretty stable at the moment, I don’t need to wear them as a comforting reminder of constancy.

Ultimately, our relationship shouldn’t serve the wearing of rings; rather our rings should serve our relationship. So when I’m ready to enjoy wearing them again, I’ll wear them; but until then, although it might seem strange, I won’t be.

As an aside, I don’t miss the fear of losing my jewellery.

I once left my bracelet on a hook outside a shower whilst staying in a hostel in Germany. The staff ever so kindly posted it back to me. (The hostel’s website is here.)

I also once dropped my wedding and engagement rings on the train floor whilst commuting. When I told the stranger next to me, it was like the entire carriage was about to get on their hands and knees to look for them.

Oh, and then there was the time I dropped my engagement ring down the plughole at a hotel. They moved me to a different room until they could call in a plumber to fish it out.

I’m so very grateful to all the people who helped me.

One thought on “I’m happily married, but I don’t wear my wedding ring. (And I have all kinds of feels.)”