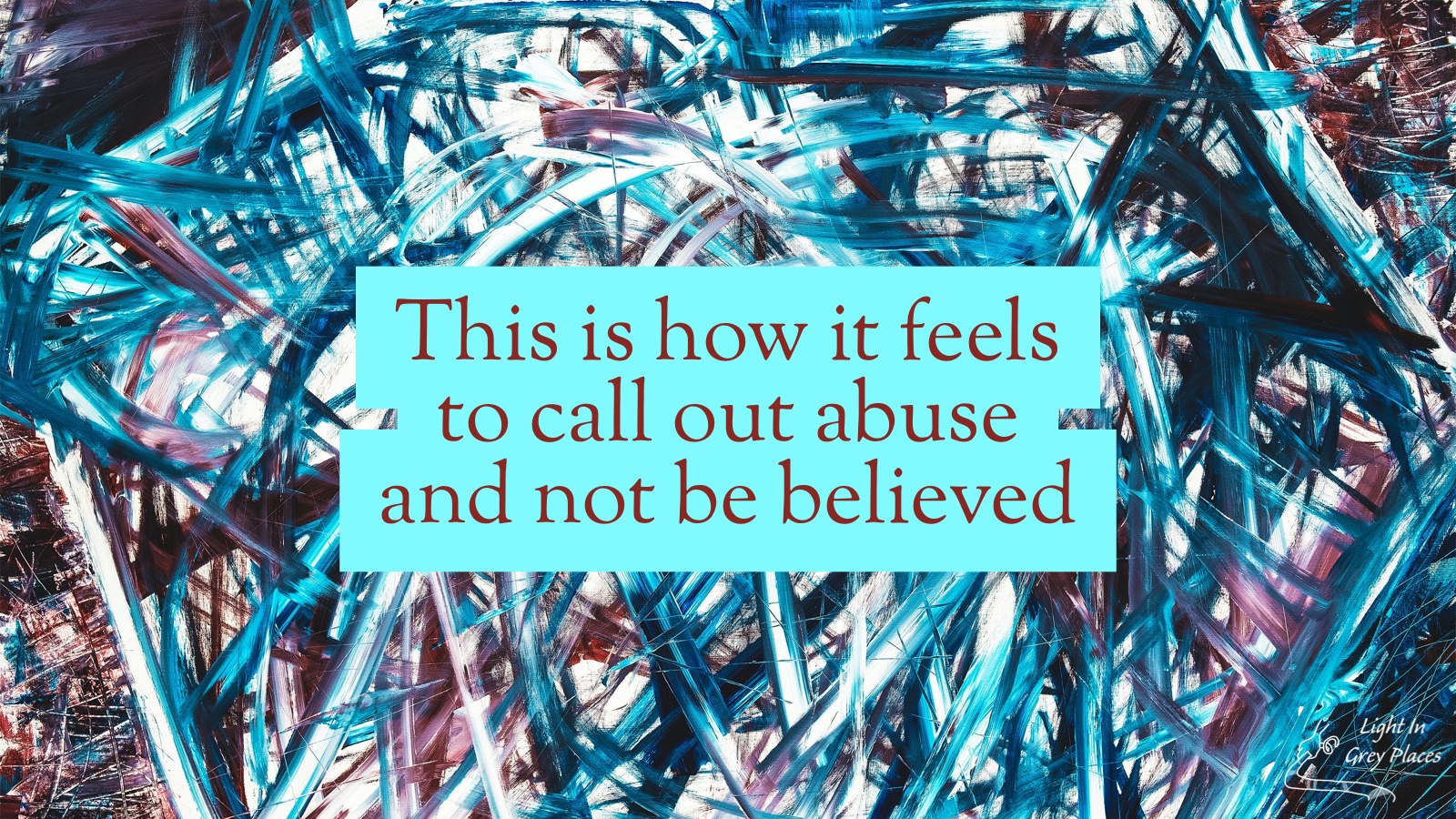 One of the classic things about abuse is that when you’re going through it, you often don’t realise it’s abuse. Even when you do, there are so many conflicting forces over your life it’s hard to know what to do. The other day, I heard a domestic violence worker use the word “chaotic” to describe the thoughts inside a survivor’s head.

When you don’t realise you’re being abused, you often think you can cope and you try to deal with the situation. But then your coping mechanisms fail and, very often, you realise that most of the people you’re leaning aren’t actually helping. Definitely not in the way that you want or need.

I wrote this post to how it feels to go through this. The post is not context-specific and it doesn’t describe abuse, just the mental chaos of failing and falling.

PS Everyone’s experience is different. If it resonates, great. If it helps you understand someone else’s experience great. But if you know someone who’s hurting, please remember not to make assumptions. Just be present and gentle.

Why doesn’t anyone believe this is a problem? What more can I do? My friend keeps giving me advice but it isn’t helping, it’s stuff I’ve already done or have tried to do My other friend believes me but can’t do anything I’m so stressed – not sleeping right, my chest hurts and my stomach is unsettled I keep trying to salvage my reputation as best I can so that the right people will take me seriously I’m so exhausted every time I have to tell my story I cry whenever I talk about it even if I try not to people think I’m being over-emotional I misspell things I become anxious that I’m going to be caught out in my words people get angry when i try to bring it up in conversation they don’t listen they don’t want to listen they say i’m expecting too much of people that i’m being unrealistic that i can’t see the big picture that i’m ill (well i am now) Why don’t they care? Surely the injustice is obvious? They say they’re the kind of people who’ll always do the right thing but they’re stalling, stalling, saying i’m being too simplistic, seeing everything in black and white they say the problem is with me maybe it is i don’t know really what i was trying to stand up for Not any more I was so sure but then i’ve always been that kind of person who was sure about everything now i’m being hammered because i’m too unyielding it’s me it’s always me it’s not the first time i’ve been this angry and anxious but i am the first to say that there’s some kind of problem with what he’s doing she’s doing everyone’s doing i must be making a fuss Except I’m not When people speak their minds in private in gossip they all say it’s not great what’s happening like i’m right like it’s not nothing but then they shrug, they shrug and move on Why can’t I? Why don’t they speak up? Why don’t they help me CHANGE this? Why am I on my own? Why will no one believe me that yes, this is bad enough NOT to be tolerated? me and my moral compass always did get me into trouble i’m the hardliner, the crazy, the ungracious one but all their talk, no matter how hard i try to swallow it, still leaves me empty i’m hungry hungry for better if i can just find a hand that doesn’t hold a poisoned pill I’m straining, trying to reach, to accommodate, to accept if they could only make a few changes, if I could just get that extra leg up, I’ll be OK again This is my future we’re talking about I can’t let go, that’s why I keep trying Not trying is not an option.

Fear. I’m almost too terrified to contemplate. Give it all up, let go of my hopes and my dreams – but why? I mean he’s good, she’s good, they’re all good people how can I give up on them? You know, it’s BECAUSE they’re good people that i just want them to stop hurting me. Is that what they’re doing? Hurting me? I thought they were hurting others or hurting God and I don’t know just NOT REALISING how their actions make my life more awkward more complicated Is it possible they’re actually not good for me? How far have I come? I’ve lost sight of the starting line. I can’t remember what it was that was so important to me – wait yes i can, that was it gosh it sounds so tired and ridiculous when i say it to myself Again. oh God! why am I still so angry! why can’t i get over what happened! when can i get my anger out? how? how? every day i have to hold it in try to forget try to rationalise away but it’s screaming and if i could scream i would Empty my lungs scraping across my throat hoarse And nothing has changed Nothing I’m just more broken Eyes stinging. Time off. Time out.

I try to explain but she doesn’t understand. She just says I’m not well and I need some space. That I need to get away from them. I try to tell her it’s not just me but all my efforts, my notes, my stories – they count for nothing. I have to go, I’m the risk, I’m the one at risk. She says she can give me a safe space. Slowly, I realise that that’s what I need. Even more than being heard, though it breaks me to admit it.

I won’t be able to come back. My future will be unknown. Smaller. I just have to choose it – if I do, she’ll give it to me. It’s just not what I wanted. Is this really happening to me? My hopes collapse. But this is the only way forward, the only way out that won’t kill me. It just feels like defeat. A leaden blanket of shame.

I fall like an empty casket, clattering on the ground. A shell of who I once was.

If you’re someone who wants to be informed about the dynamics of abuse, I would encourage you to study. I am full of admiration for the work done on the blog Spiritual Sounding Board. A recent blog series started there called Spiritual Abuse in the Church: A Guide to Recognition and Recovery by Pastor Ken Garrett. In the opening post Garrett likens the experience of spiritual abuse as being inside a house of mirrors. It is an apt analogy.

Photo by Markus Spiske on Unsplash