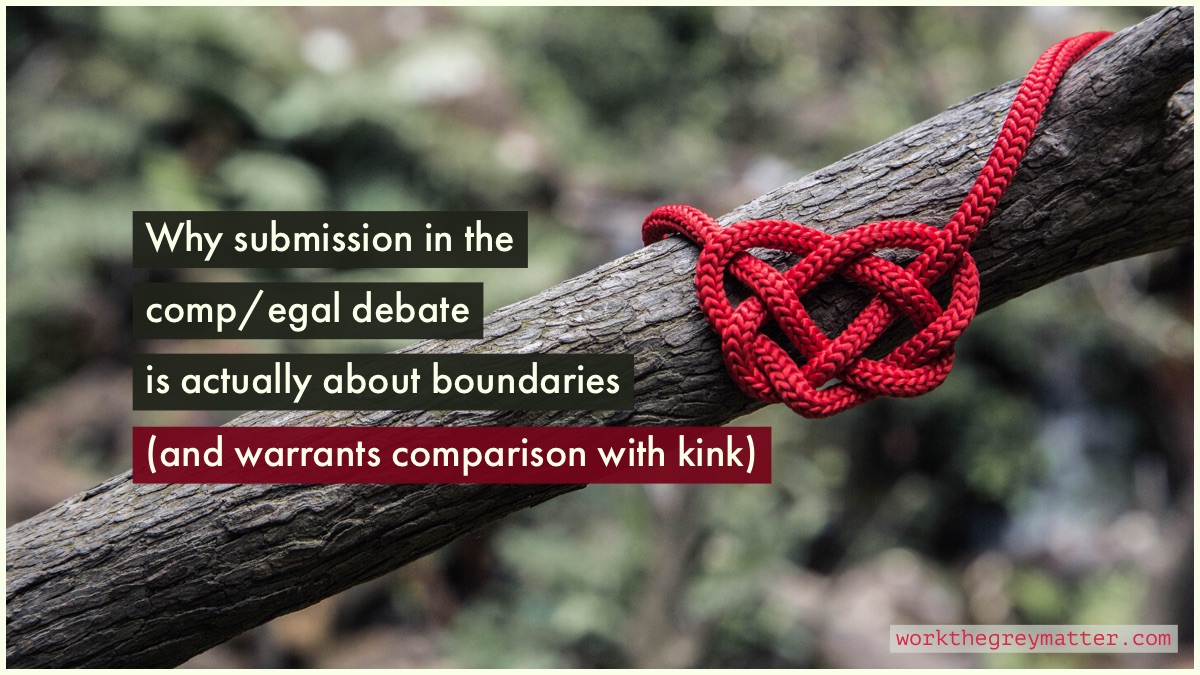 Complementarians, egalitarians and kinksters are three groups of people who all frequently talk about submission in the context of a sexual relationship but using different words with different meanings.

Each group explicitly says that it doesn’t support abuse, but each one also says that either or both of the other two groups normalise abuse. So how did that happen?

First, let’s pin down what we mean by ‘abuse’

I believe that God created us to be creative beings; as such, it’s important for us to grow through expressing ourselves, acting imaginatively, and appreciating creative expression in others. That’s what I mean when I talk about play.

As for abuse, various definitions are out there, but in very broad terms, abuse is something that destroys (or tries to destroy) a person’s capacity for play. It’s not the only thing that can have this effect, but this is what abuse always does. You might even say that abuse is false play.

What do we mean by ‘submission’?

As I’ve read discussions about ‘submission’ from these three groups, they all seem to think of it as, on some level, one person setting aside what they want so that someone else can get what they want instead.

When the kink community talks about submission in a D/s context, they’re referring to a situation where one person (the dominant) makes the decisions and another person (the submissive) complies as if they have no choice but to comply. Hence the word ‘domination’.

There are many variations around what this can look like, but kinksters insist that D/s should only ever be in a context where the submissive has freely given their enthusiastic and informed consent. Most also insist the submissive should have an exit mechanism (e.g., safe word) so that, even if they act as if they had no choice, they do still have a choice.

Now, I am simplifying; I’m not saying you have to agree, and I’m definitely not saying D/s always works out this way. But in very broad terms, kinksters believe D/s is a form of play because it should come from the submissive’s choices and benefit the submissive. That’s why they say that consensual D/s is not abuse.

In the context of marriage, complementarians believe that the husband has the final say. He’s meant to exercise his authority in a Christ-like manner (and is accountable to God if he doesn’t), but the wife should submit to him 24/7.

If this leadership/submission dynamic feels uncomfortable, they say that’s because we’re flawed and sinful creatures who haven’t gotten used to it yet, but nevertheless, this arrangement is where truest happiness lies. After all, leading and submitting are two complementary roles that God gave to two equal-but-complementary sexes. And God’s design can’t be abusive.

Meanwhile, egalitarians say that because men and women were created equal, they are equally capable of leadership and spiritual discernment; thus a marriage should involve mutual submission with both spouses submitting to each other.

Recognising that people have different aptitudes and skills, the leading role within a marriage may not be shared exactly 50:50 but they agree on the balance by mutual consent, saying it’s not predetermined by one particular interpretation of Genesis or Ephesians 5.

What this means in practice

All this has huge implications for how a situation is interpreted when a relationship isn’t working out.

In a D/s dynamic, assuming consent was maintained, all that means is that it’s not working out. (However, abuse is a very real problem in the kink scene.) Just as you might put away one board game and get out another, or quit board games altogether, kinksters would say the submissive can try something different or shrug and move on.

In a complementarian relationship, however, if something’s not working out, no one suggests the idea of a predetermined, mandatory, 24/7, leadership/submission dynamic might be part of the problem. If anything, the problem is blamed on how they haven’t got leadership and submission quite right yet and it’s assumed that fixing this will address whatever sinful habits are impacting the marriage. (These sinful habits are often assigned to the wife and her ‘Jezebel spirit’.)

With egalitarians, if the relationship isn’t working out, they tend to assume that it’s because someone’s boundaries are being transgressed. (At least, that’s the impression I have from reading their literature.) As they figure out why that’s happening and how to stop it, mutual submission is discussed in terms of respecting each others’ boundaries, not just following the other’s lead.

Keeping in vs. Keeping out

And this is why I think they disagree so sharply when it comes to abuse.

You see, the complementarian concept of leadership is itself a boundary, but it’s a keep-in boundary; wives can do things and question things up to a certain limit but not beyond that. Submission means staying inside the pre-determined mould and not chafing against that line.

Egalitarians, however, think in terms of keep-out boundaries — the kind that make it harder for people to trespass against us. Those keep-out boundaries are non-negotiable in discussions about submission because egals believe that transgression is part and parcel of what sin fundamentally is.

And in case you weren’t paying attention, abuse is sin.

But here’s what I find telling: Kinksters may or may not care much about God. But kinksters who care about consent won’t curse God when they look at egalitarianism’s harm-based ethics with its keep-out boundaries.

Nothing similar can be said for complementarianism. For all their aspirations of Christ-like husbands and so-called servant leaders, if the husband holds the right to the final say, then he is assigning a keep-in boundary onto the wife. Ironically, this is the essence of a D/s dynamic. Except where kinksters say the submissive absolutely must first give free and informed consent (and be able to withdraw it), complementarians instead say, ‘Ephesians 5:22’.

As in, “Wives, submit to your husbands, as to the Lord.”

The way I see it, submission is less about putting aside your will and more about aligning your will with someone else’s. Submission is not about bearing with someone; it’s what you do when you want to work together.

Christians often say Jesus submitted to God the Father when he went to the cross and that we should be willing to do likewise if necessary. However, Jesus didn’t die for the Father’s sake but for humanity’s sake, so why would we ever think that it’s appropriate for our boundaries to be transgressed by the person we submit to? To say that I’m grateful to Jesus for restoring his image within us and enlivening our capacity for play is a huge understatement. But his willingness to bear the cost of doing that shouldn’t be our reference point for spousal relations.

Maybe that’s all the Lord requires of us.

If you want to read more about why the complementarian construct of submission doesn’t work, you might appreciate this: When we don’t explain the Trinity, the gospel gets ugly (especially for wives).

If you fancy some more scholarly material, Margaret Mowczko has explored this from many angles: