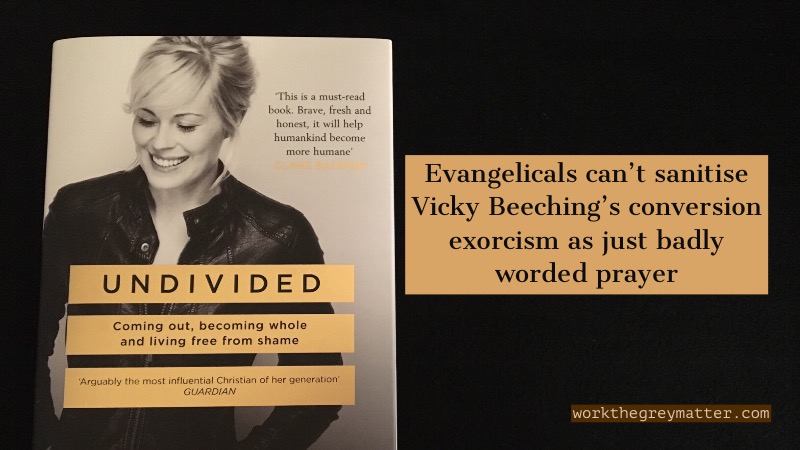 When I first read the interview in which Christian singer-songwriter Vicky Beeching came out as a lesbian (after a substantial performing career in the USA’s Bible Belt), I found myself faced with a number of challenges. Perhaps surprisingly, the biggest one for me related to how she had undergone an attempted exorcism. It had been aimed at converting her sexual orientation from gay to straight and she had been traumatised by this experience.

I wanted to understand why this was the case. (In all honesty, this wasn’t obvious to me.)

Now, reading her recent memoir-cross-apologetic Undivided, where she defends both her gay identity and LGBTQ+ identities in general, I still have questions, but I also have more answers.

And one thing above all is clear to me: this attempted exorcism ought not be described as merely ‘spontaneous prayers that could have undoubtedly been worded better’. This is what Peter Lynas said whilst writing for (and on behalf of?) the UK Evangelical Alliance. There is much that can be said about his review, but for this post I’ll focus on just these words. I expect many LGBTQ+ advocates would say these words demonstrate a lack of understanding regarding the nature of the offence that conversion therapy presents to them. I think there is something to that, but what I want to show here is how these words fail to take responsibility for beliefs and practices around healing ministries.

I’ll try to explain my reasons as gently as I can.

CONTENT NOTE: This post describes Vicky’s experience of attempted conversion prayer (using details from her book) as well as some anti-LGBTQ+ rhetoric.

I’ll start with why I was uncomfortable reading Vicky’s initial interview.

I am a non-gay, non-bisexual Christian woman from a UK church background similar to Vicky’s. This might be startling for some people to read, but I was already very familiar with the idea that homosexual orientation could be caused by having a demon. I even had two established explanations for why prayer for a straight orientation might not ‘work’. One was that the gay or bisexual person was unwilling, and the other was that the person praying lacked sufficient knowledge of the supernatural to tackle the problem at its root.

But reading the interview, something nagged in me saying I ought not attempt to attribute either of these explanations to Vicky’s experience.

Another problem was Vicky’s statement that receiving prayer for ‘deliverance’ (that’s the nice word for dealing with demons) had traumatised her. I had no frame of reference to understand this. The idea of demons did not frighten me, nor did the suggestion that a demon or demons might indeed might be ‘inside’ me. I also didn’t find it upsetting to think of someone consensually praying over me to change my sexual orientation. So why was this so bad for Vicky? Was I just missing details of the incident or did I generally lack understanding regarding LGBTQ+ identity?

I knew that she wasn’t the only one. I’d already quietly observed the furore over an attempted advertising campaign that said “Not Gay! Ex-Gay, Post-Gay and Proud. Get over it!” In the end, the the advert was not approved for the sides of London buses. I’d also spent enough time listening in on ‘unfundamentalist’ circles to know that conversion therapy was vehemently hated. I even knew that “praying the gay away” was listed amongst other outrageous practices in the very non politically correct game Cards Against Humanity.

But I didn’t understand why.

During her teenage years, Vicky went on a Christian summer camp called Soul Survivor where a few thousand people (mostly aged 14-35 I think) meet up for various events and meetings, with gathered worship in a large tent/auditorium. After her time there, Vicky “came away feeling inspired and encouraged” [p36], no doubt due to the energetic speakers, helpful life-lessons and fantastic music.

The camp always had an atmosphere of expectation, so it was commonplace for people to stand at the front during the gathered worship and speak publicly about the miraculous things God had done in their lives.

A few days after Soul Survivor Vicky went off to another second camp (which she doesn’t name in her book). Whilst there, Vicky heard a red-haired girl testify that she’d been “set free from the sin of homosexuality.” [p37] By this time Vicky had been wrestling with her feelings towards girls for a number of years and was desperate to have them changed because she had been led to believe they were sinful. So she went up to the front and asked for prayer.

When she said she was gay, the couple assigned to pray for her “exchanged worried looks” and called for more adults as “backup”. They then started praying loudly and aggressively over her, commanding every demon to go. They pressed on her back and her shoulders and Vicky felt awful. She writes regarding her thoughts, “I was in the grip of a darkness I couldn’t control or beat; I was full of demons.” Then she felt sick and retched; the people praying seemed to consider this reasonably normal. (As Vicky explains: “people often vomit during exorcisms, which is when the demons are thought to leave.” [p40])

It must have gone on for some time as they were praying with her long after the meeting had ended [p41]. Vicky writes, “By the time it was finally over, I was hunched on the floor, shaking and wishing the ground would swallow me up.”

What’s more, in a parting conversation, one man suggested to her that she fast (go without food temporarily) if the feelings come back.

Vicky writes: “this set in motion a preference for punishing my body rather than caring for it.”

And she was still gay.

For now, I’ll leave aside the elephant-sized assumption that homosexual orientation is caused by demons. The questions are:

Works of the Spirit

In my view, describing this incident as “spontaneous prayers that could have undoubtedly been worded better” communicates several things. The most prominent is that, in principle, it condones praying to convert a person’s sexual orientation. However there are several other implicit points:

But when you go through the questions I’ve listed above, it seems to me that this was a situation Vicky should never be have been put in, let alone trapped in. And this is regardless of whether demons exist or whether inclusion of LGBTQ+ identities is part of God’s plan.

I’m not suggesting that this is a problem unique to evangelicals or even Christians. I’m widely read enough to know that some people of other faiths believe their gods require them to harm women and girls. I’ve also heard accounts of exorcisms in other major world religions, including one account that I heard first hand. Plus I know that some exorcisms are far more violent than Vicky’s, carried out against children younger than Vicky was.

But however much mainstream churches may disapprove, Christians don’t get to sanitise their hands of Vicky’s exorcism by dismissing it as a badly worded prayer. Instead, her experience should challenge the policies and practice behind healing events of this kind. Not only that, but it should also challenge the culture and theology that produces war-like deliverance prayers. Because these don’t come from nowhere.

CS Lewis, for example, believed that demons existed. There’s a case for saying the popularity of his fictional work The Screwtape Letters was due to more than just what it said about God or the Christian experience; people asked eagerly for a sequel and Lewis had to explain that writing from the perspective of a demon was actually not something he enjoyed very much. Yes, Lewis warned against being over-interested in demonic activity, but I reckon the hard truth is that there is an appetite for sensationalism within the church. In my experience, Christians frequently quote Lewis without context or caveats, but they don’t have frank discussions of the theology underlying healing ministries. In doing so, I believe this is one way in which they foster an unregulated attitude towards prayer, miracles and the supernatural. This has the potential to inflict much harm.

I know that not all evangelicals will agree with Lewis on the matter of demons, but they need to own this. Because regardless of where the dust finally settles on the matter of same-sex marriage and gay conversion therapy, we’ve also got a mental health crisis on our hands. That means there’s a whole bundle of other issues where Christians may easily wade in lacking wisdom.

Meanwhile, it’s important that Christians who aren’t affirming of LGBTQ+ identities don’t mistakenly think that Vicky’s opposition to conversion therapy is down to one botch job. She spent years self-medicating and self-ministering to change her sexual identity, even within an environment that felt hostile to her. That would be a pretty big deal if she had been suffering from some kind of substance addiction; how much more then is it, given she was wrestling with her sexuality?

I want to labour this point. Our sexualities are intricately woven into our bodies and the very fabric of our being. That means that any statements about a person’s sexuality are statements about that person’s embodiment, which is far bigger than what they choose to believe or do. Everyone, especially those who aren’t affirming of LGBTQ+ identities, needs to be mindful of this. Because unless we frame ourselves as embodied beings, we will be ill-equipped to understand the nature of the injury felt by people like Vicky when they are told that their sexuality can or should be changed.

Lastly, I recognise that each person’s sexuality is complex – and broader than sexual orientation. I’m open to the possibility that something might ‘go wrong’ with it, just as with other parts of our embodied selves. However, when we suspect this might be the case it’s crucial that we do several things. We must take the time to understand where the hurt and harm is happening, we must take precautions so that we don’t cause additional harm, and we must put the Holy Spirit in the driving seat. Rather than being focussed on one preconceived and particular goal, we should seek growth in faith and holiness. Then, if a person’s sexuality is to be authentically nurtured through some kind of shift, let that come in its own time and way, as a by-product of a wider journey with God.

If you found this helpful, you might also be interested in my open letters To the evangelical couple considering sex therapy or to Nate Sparks on leaving evangelicalism. I also reflect on my experience in an evangelical Christian fellowship in To stay or to go? On church, LGBT+ affirmation, and uncomfortable places.