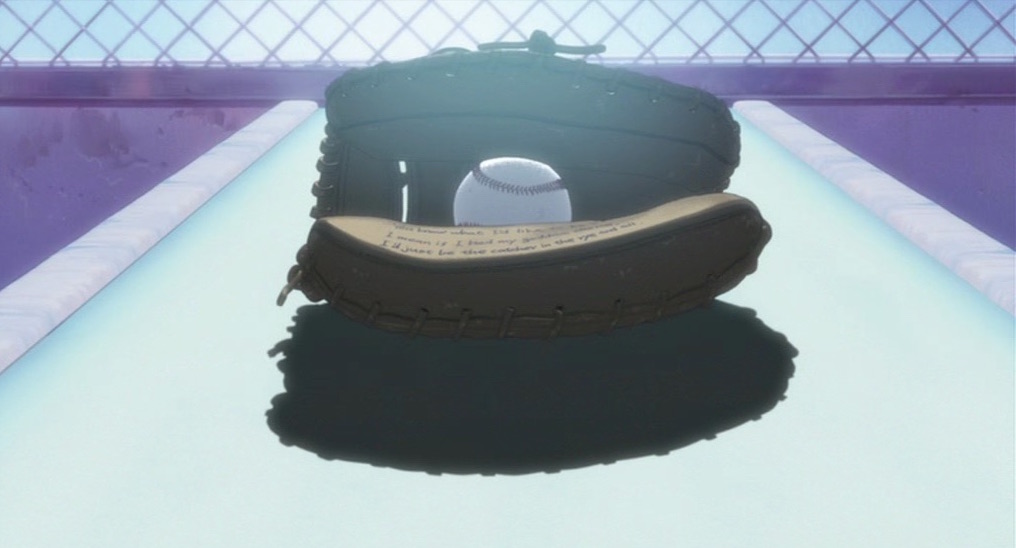 “What would you say your favourite series of films, books or TV shows would be?” my husband asked.

I kept my eyes on the motorway as I waited for our passenger in the back seat to answer. The evening was quickly passing from dusk into night and I was conscious of the headlights of other cars as they came flickering into my vision. It was nothing I wasn’t used to, just now I was more conscious of it. That’s what happens when a friend with epilepsy comes to stay for a week.

So what was my favourite series? The obvious candidates came to mind: Lord of the Rings, Babylon 5, Harry Potter. Except that I’d grown tired of the LOTR films and wasn’t familiar enough with the books to name it as my greatest fandom. I had much respect for J Michael Straczinsky’s Babylon 5, but it wasn’t something that I could immerse myself in again and again.

Was I going to say that Harry Potter was my greatest fandom? After all, we were driving back from Warner Studios in Watford. Day trips to the set of Harry Potter don’t exactly happen by accident.

“Actually, I think it would probably have to be the anime series Ghost in the Shell: Standalone Complex. The thing about it,” I said, “is that it shows me concepts, images and stories, important ones, that I’ve found nowhere else. Not even in Harry Potter.”

This was going to take some explaining to our guest.

Imagine Japan far in the future. It’s a world where people routinely cyberise their bodies, where nearly everyone has a cyber-brain and they data link with each other – and where hacking is the big risk. Because if you’re hacked, someone else can control you, alter your perception of your surroundings, or wipe your memories. (Kind of like imperio, protego totalum and obliviate, but using technology, not magic.)

The original manga was set in AD 2030, but given that we’re already in 2018, I think Shirow Masamune was being a little optimistic when he first conceived the idea.

The plot follows a small elite unit of public protection officers (kind of like police) who solve particularly complex cases. And, well, there’s this episode where one of the team, Togasa, goes undercover to a kind of medical detention centre. It’s from the first season, episode 11: In the Forest of the Imageos. (Spoilers coming.)

The centre houses children who are essentially too well adapted to technology. They create cyber mazes that get used by the military and they would stay diving the internet all day if they could. So, for their wellbeing (or so we are told), they are prevented from doing this.

Anyway, Togasa learns about a person the children call ‘the chief’. The chief has visited recently and rumour is going around that he will visit again soon.

But there are blurs between you perceive and what is actually there. At the end of the episode you discover the chief was in the centre all along, he just didn’t want to be recognised. Instead, he sat in a wheelchair as one of the centre’s adolescent patients; he didn’t speak, but just held a lefty catcher’s mitt.

I thought what I’d do was, I’d pretend I was one of those deaf-mutes.
– JD Salinger, The Catcher in the Rye

Meanwhile Togasa is seriously injured in a fight, the centre goes online and all the children start having fun wreaking havoc over the net. Whilst Togasa’s team make their way in to rescue him, you see the chief talking to one of the children. He explains he has to go and the children won’t see him in a while because too many adults are about to come and it isn’t safe for him anymore.

The kid looks at him and says, “You’re going to wipe our memories again, aren’t you?” The chief says yes. The kid then says he doesn’t want to forget the chief and asks him to leave behind something that they will be able to remember him by. The chief promises he will.

And sure enough, in the closing moments of the episode, after the adults have come and order has been restored, you see four of the children standing still in a room and the lefty catcher mitt is in the middle. On it is written in blue ink:

You know what I’d like to be?
I mean if I had my goddam choice?
I’d just be the catcher in the rye and all. 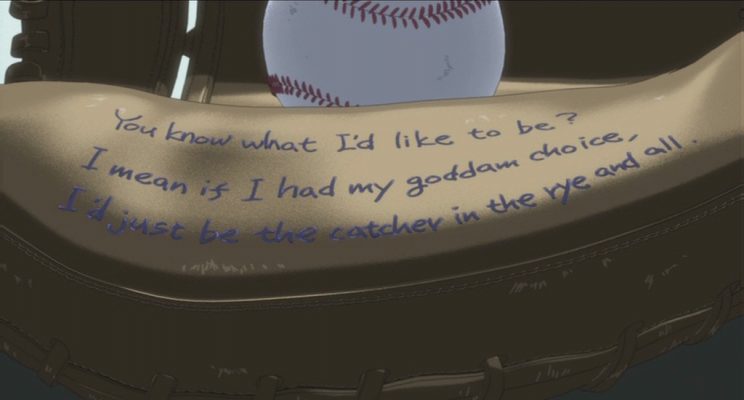 Except that Togasa has also been told that “lefty catcher’s mitt” is internet slang for something you think is there, but actually isn’t.

Confused? I’d be surprised if you weren’t.

But that’s how Standalone Complex works – its plot is fiendishly complex and I was still putting pieces together the fourth time I watched it. Even then, I missed most of the Salinger references.

As I gripped the steering wheel I tried to explain this episode to our passenger, Becca. My husband was already familiar with the plot and kindly filled in the gaps every now and then when I missed something important.

“I’m probably going to cry as I say this,” I warned them, mainly so that they wouldn’t worry too much. And I was right that I would cry, I just hadn’t guessed how right I would be.

Becca had come from the US to visit us for a week (in the UK). My husband and I had invited her because she writes amazing poetry, is an ardent feminist and consent activist, and has held onto her sanity despite the fundamentalist church/cult she grew up with. She was an atheist (still is), but one who was willing to work with us and talk to us, knowing that we were full-on Christians. Her only condition was that we didn’t try to convert her – a condition we were happy to accept. We already had plenty of misgivings with how conversionism was expressed in some parts of the church, but more than that, we just wanted to meet her as she was.

She gave us an opt-out early on, warning us about her epilepsy. “For some people, it’s too much,” she wrote. Our response was that if she was able and willing to get on a plane, we would do whatever it took to accommodate her disability. We were not about to shut down the whole holiday simply because of that.

But epilepsy does screwy things with your brain. Over the summer, she messaged me saying she wouldn’t come after all because of … stuff. We were gutted, but we always knew we’d have to respect her choice. But she then forgot she’d told us this. The shock of the stuff she’d referred to gave her four major seizures and she temporarily lost her memories for six months. What memories returned came in fits and starts and there were still holes. But when the dust began to clear she was reminded that she’d cancelled on us, and encouraged to take us up on the offer anyway. So she came back saying actually, yes, if we would still have her, she’d still like to come.

We were thrilled, of course.

But it also meant that I had to do this whole holiday, the Harry Potter World, the London sight-seeing, the conversations about church, life, feminism – I had to do all of it in the risk that one day she wouldn’t remember any of it. Because this isn’t the world of Harry Potter: we can’t take our memories, store them in a penseive and retrieve them when we need to. Neither can we download them to an external hard drive, like in Ghost in the Shell.

So I sat, hands on the steering wheel, eyes on the road, wiping the tears off my face, explaining how it had been on my mind that Becca might lose her memories of this week.

She reached forward from the back seat and gently touched my shoulder. “It’s my greatest fear,” she said.

“But,” I said, pulling the image of the lefty catcher’s mitt into my mind, “I think about that episode from Ghost in the Shell and I think that even if you do lose all your memories, what we’re experiencing together this week is gonna shift something inside. And that change will stay with you, like how the mitt stayed with the children, even if the memories of how it got there are lost.”

That was my comfort.

I never guessed when I first watched Ghost in the Shell: Standalone Complex that its stories would be such a resource for me – helping me make sense of the strangeness of my own life and the lives of those around me. But that’s one reason why I rate it so highly. And with its images I was able to live our holiday unafraid, despite the risk, despite the uncertainty, despite how badly I didn’t want to be forgotten.

Because I realised that some things within us are more real than memories.

Just as a heads up to anyone now curious about the series and thinking of watching it: it is very violent in places and I will never re-watch season 1 episode 10. You have been warned.

PS I will be blogging more in due course about the conversations Becca and I shared.

One thought on “More than memories: why I am not afraid of losing our holiday to epilepsy”