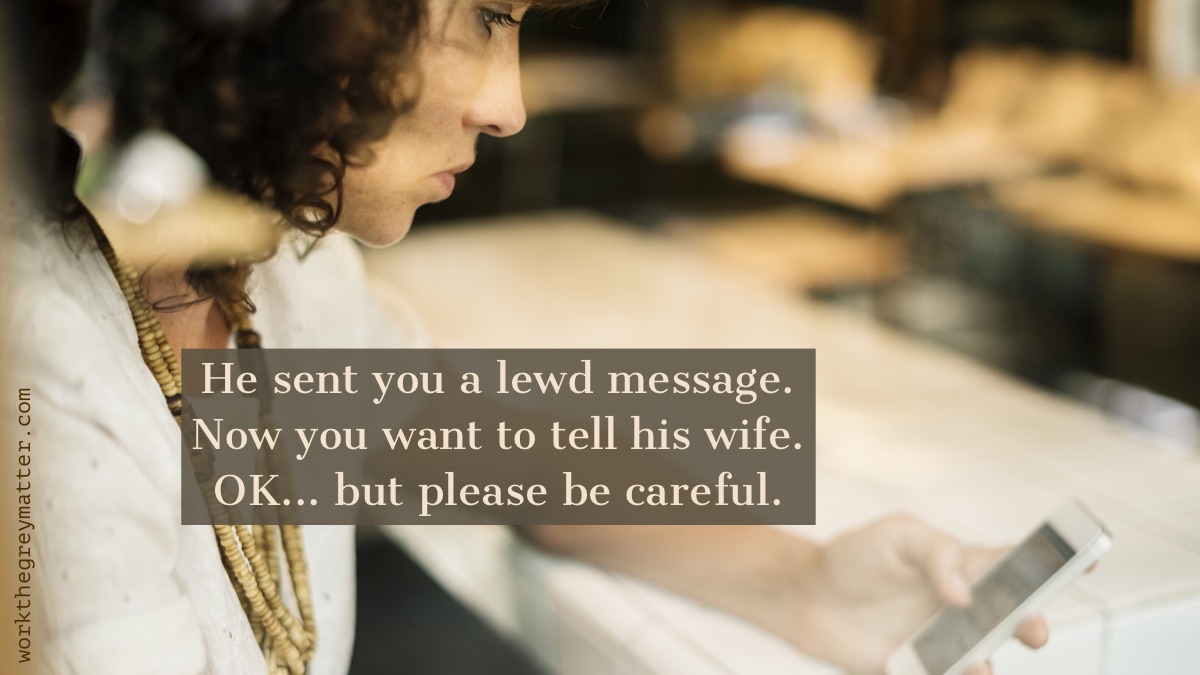 The thought of getting your own back feels great. Some random guy sent you a lewd unsolicited message and a quick flick through his timeline shows that you’re probably not the first woman he’s tried this with. His comments ooze with ego and a grossly misplaced sense of entitlement. You see it. You’re fed up with it.

And after a little digging you’ve found out who his wife, girlfriend or play-partner is.

You relish the thought of busting this guy and seeing this woman triumph over him in a blaze of fury.

But as satisfying as the thought is, is it realistic?

I’m gonna confess, I’ve not actually been on the receiving end of many unsolicited messages (though I have been air-dropped a few times whilst on the tube). I’ve also not known what it’s like to discover that the wonderful person you’re attached to is actually rotten apple. (Well, hmmm… maybe I have, but it was a long time ago and it wasn’t a big deal.)

I’m just saying — dealing with guys like this isn’t my area, so… caveats.

But for those who are frustrated and angry and wondering how they can help other women smash patriarchy, the question may well cross your mind: do you tell the wife or girlfriend about his behaviour?

And here’s my short answer: this could be very powerful, but unless you know these women, you don’t know where they’re at. And you could be putting them at risk.

Life is rarely as neat and as satisfying as it is in a well-written novel. So if you’re going to take action, you need to take care.

Where is she at? You don’t know, actually.

Even if you do know her a bit, you’re not going to know her inner emotional state well enough to be able to say where she’s at. So you shouldn’t make ANY assumptions.

Some women may know already that he’s a rotten apple — and feel ashamed. Will they see your message as heaping on more shame? They may be afraid but not know what to do. If they get your message will they feel burdened further? They might feel validated a bit (“Hey! I’m not the only person who thinks he’s being unreasonable! A stranger on the internet agrees with me!”) but it’s more likely that if they didn’t know what to do before, then your message will not help them know now.

Unless of course, your message sign posts them to avenues of support. But if you do that, you’re not in the world to getting your own back against him, you’re in the world of helping her.

And OK, other women may not know what he’s doing on his other social media profiles — but if this comes to her as a bolt out of the blue and she now begins the road of piecing patterns together, she’s very likely to feel alone. And are you — supposed patriarchy-smashing stranger on the internet — going to be trusted and reliable company? Let’s be real, it’s possible, but not likely. For one thing, you probably don’t have the time. For another, why should she trust you when she doesn’t know you?

Then you get the women who don’t know and are outraged to find out. But before you strike your victory pose, bear in mind that most people don’t know how abuse dynamics work. If she takes matters into her own hands, she’ll probably do so thinking she can handle it. She may simply not be prepared for his deflecting responses or his emotional manipulation or how he brings in his friends to threaten or put pressure on her. Bear in mind, women in abusive relationships are most at risk when they try to leave. Confronting a guy with a view to leaving him is pretty close to that. Although this is an important and liberating step that women can and do make, it’s also a precarious one. You don’t want your message to be the thing that trips her into doing thing she later wishes she’d done differently.

And yes OK, for other women, they may not know he’s a sleazy cheat behind her back and she may now be able to force things out into the conversation and take constructive actions. But… a woman needs to be in a pretty empowered place to go down this route. And if this guy has been routinely rubbish towards her, it’s unlikely that she feel empowered in this way.

And supposing that she genuinely is empowered: unless this guy is a master of being two-faced and stealthy (which is definitely possible!) she’ll already be smelling out the kind of guy he actually is. So… will your message change anything? It might move things along a bit quicker and that could be a good thing and she might be appreciative — but if so, your message is not the all-important pivot point when she suddenly sees him for who he is. You’ll need to be humble and accept that.

Telling her will throw open questions

Let’s suppose I was a smoker and I didn’t know smoking causes cancer.

I’m smoking away one day and someone comes up to me and says, “That’ll kill you.” I’m like — “Wha…? But the cigarette company never told me that! Is this true? How reliable is this person? I’m not dead yet, so what does that say? When will it kill me? Is it killing me already? Is that why I’m getting [completely unrelated symptom]? What should I do about it? Does this person think I’m immoral or bad because I smoke? Is that why other people have been so weird around me? What about my friends who smoke? What kinds of medical costs am I now going to face? What if I can’t afford them? And — oh CRAP! — I’m actually addicted to this stuff and I don’t even know how to quit!”

Similarly, if you throw in “Your husband/boyfriend is a misogynist” it’s going to throw open questions in a woman’s mind which she may or may not be in a good place to handle at that point in time. So she needs help and support and steering, because left to her own intuition she will in all likelihood do things that aren’t helpful. And I know I’ve said this before but these dynamics are complex and it’s so easy to go into them naively and get burned.

Because of this, I think it’s crucial to exercise gentleness in all things. So, you could say “Hey, I wondered whether you might be aware of this thing… Are you? Are you OK with it? Actually, are you OK? I’m not meaning to shame you here, but I believe men can be better than this…”

That way, it leaves her able to start off thinking that about what he’s doing in a manageable way and later have a growing realisation of its wider significance. If you startle her with, “You’ve got a massive problem!” when you don’t know the inner workings of where the woman is at, you’re more likely to start a panic. People need to be handled gently.

And having said all of this, you need to be prepared for the possibility that she’ll just say, “Yeah, I know. I’m fine with out. Butt out.”

In my late teens, I lived in shared accommodation for a year and was watching Cruel Intentions. Another woman came in and smiled and said, “That’s a got a great ending.” And it does (albeit, in that case, it’s a woman who gets her comeuppance). The thing is though, reality is rarely like that.

The struggle to wake people up to the abusive they’re experiencing, to get them out of the situation and to protect them from further abuse is hard enough — let alone any thought of actually getting recompense against the man who’s been causing so much damage.

For this reason, we may see how things begin, but not how they end. So it’s important that we play our cards in a way that keeps options open and provides choices for the people who are most vulnerable.

It’s not on us, the bystanders, to keep the secrets of liars. But if we want to start the work of uncovering them, then must appreciate that we’re un-bottling a whole heap of mess. If we care about smashing patriarchy, then we shouldn’t leave the wife or girlfriend to clear it up on their own.

Fortunately, there’s no law against that.

If you’d like a real life example that illustrates some of the complexities of telling other women that they’re being cheated on, but ultimately called the man to account, this story in the BBC is amazing: My cheating boyfriend gave me HIV – here’s how I got justice.