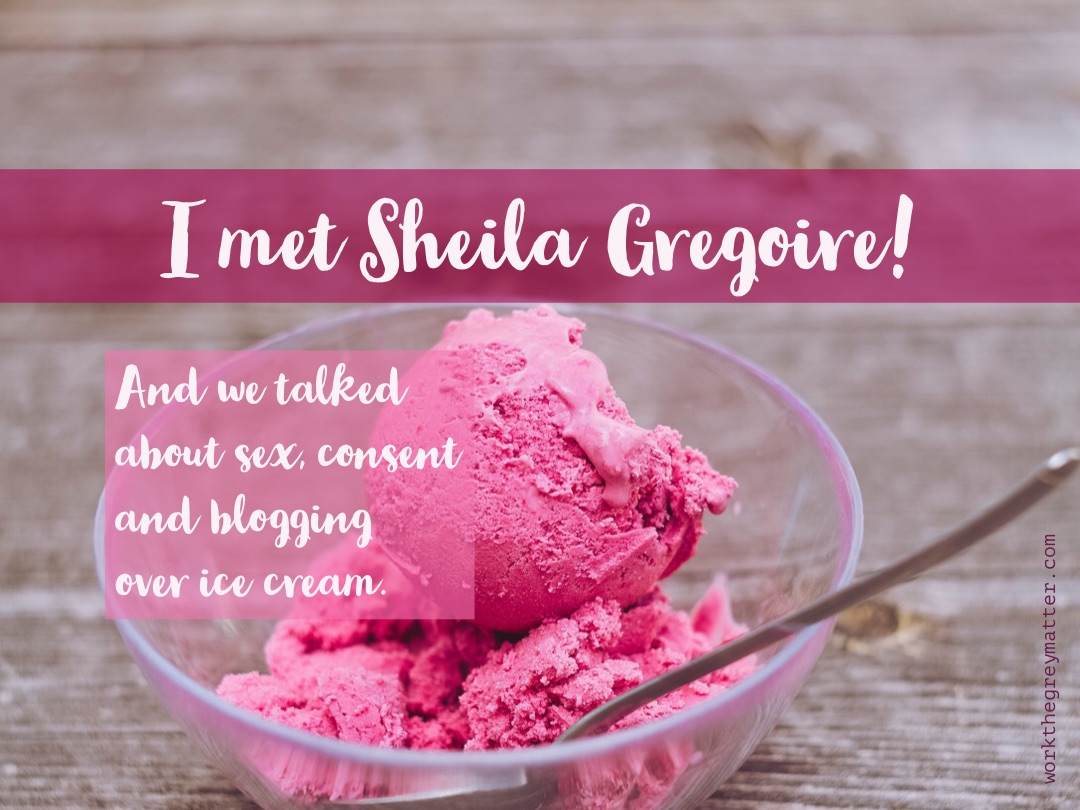 So, Sheila Gregoire came to the UK on holiday and WE MET UP!

We had a great chat over ice cream and it was wonderful hearing her vision for her platform and her take on recent events in the marriage/sex blogging world.

So, if you’ve not heard of her, she runs To Love, Honour & Vacuum.

Her topic is sex (for married, Christian, heterosexual couples) and she finds that a lot of people come to her blog for sex and begin to deconstruct a number of their (false) complementarian beliefs. Which is an absolutely fabulous work.

I’m not nearly as familiar with her blog as I’d like to be, though when she gets onto topics that are close to my heart, I find she’s a cut above many others, even if I don’t fully agree or would put it differently.

More recently she did a survey related to comments left on her blog about Emerson Eggerichs’ book “Love and Respect”. Her take-down review of the book is here.

At the bottom she links to a report with her analysis of the comments people made about the book. Then, having realised how awful it is and how it propagates rape culture, she took action to see if another prominent Christian organisation who knew her would take a stand on it. She approached Focus on the Family. But you know what? They. Did. Not. Care.

She was stunned. At which point she recorded this podcast: In Which I Admit I Was Naive–and Beth Moore Was, Too.

So, with all of this in the mix we and our husbands got to chat over ice cream.

Here are some of the things Sheila said that struck me

Her blog is self-financing. She doesn’t take donations from anyone. From a financial-responsibility angle, I think this pretty incredible. It largely frees her from both the agony of thrift (which can blight public sector organisations) and the hypocrisy of spending on ostentatious overheads (which does happen in the charity sector).

It was also striking that because her blog is self-financing, it gives her a vocal independence. Many prominent speakers need their speaking income to survive (by which I mean, accommodate the lifestyle to which they have become accustomed), but if she lost all her speaking events, she’d still be able to run her platform. It’s an incredibly powerful position to be in – and more power to her, I say.

I’ll be honest: I was nervous that she’d be, I dunno, disapproving or whatever given that I’m no longer sold on the idea that all sex outside marriage is wrong. Plus, I also support same-sex marriage. But these didn’t seem to create friction in our conversation – and I was really glad about that.

I asked Sheila why she believes sex only has a place inside marriage. Her answer was one I hadn’t actually heard articulated well — and it has a lot going for it. She said that when people become very physically intimate with each other, but outside marriage, then they risk creating an illusion that there is more intimacy in the overall relationship than there actually is. Plus, kids, STIs, etc.

And… probably this will end up being a blog post in the distant future, but although I think some of my baseline assumptions are different to Sheila’s, I am fully on board with the idea that a couple’s physical sexual intimacy should be commensurate with the overall relational intimacy. Otherwise the message of the sex (and I believe that sex speaks) is untrue. In fact, I’d go so far as to say that this concept of commensurability between an act and the overall relationship is one of the pillars of consent. (And I don’t just mean sexual consent, but also in other areas, such as humour.)

What we learned from each other

As we shared notes, I mentioned that I (eventually) want to do a series looking at Tim & Kathy Keller’s book The Meaning of Marriage, which isn’t as bad Eggerichs’ book, but has gaping holes in it. And I started listing all the flawed baseline assumptions that Christians make about marriage. Keith (Sheila’s husband) then passed me a corker: he said that complementarians say that the husband is meant to be Christ, and that the wife is meant to be the church, and yet it’s wives who tend to be told to bear with their husbands’ waywardness in the way that Christ bears with the church. Touché!

I also threw out my belief that there are two parts of covenantal belonging with God: entering relationship and remaining in relationship (symbolised in baptism and communion). That instantly made complete sense to her. I then added that I reckon male circumcision and the female womb/pregnancy symbolised these two co-equal components of belonging. And she liked that a lot.

That brought a smile to my face.

As we came to the end of our conversation, it was evident that there is so much more that Sheila wants to do with her blog, and so many avenues of thought that she wants to explore – especially to construct a good framework for understanding passion, and also to deconstruct concepts of power.

It was fun to see that I’m not the only one who thinks big and feels the weight of what has not yet been written.

May God be with her and give her success in her endeavours.

If you wanna read more about male and female as being about ‘entering and remaining’ in relationship with God, check out Priestesses in the church? Why CS Lewis’ argument was right, but his conclusion wrong.

You’ll also find my sex resources on the Sex worth celebrating index page.

2 thoughts on “I met Sheila Gregoire! And we talked about sex, consent and blogging over ice cream.”