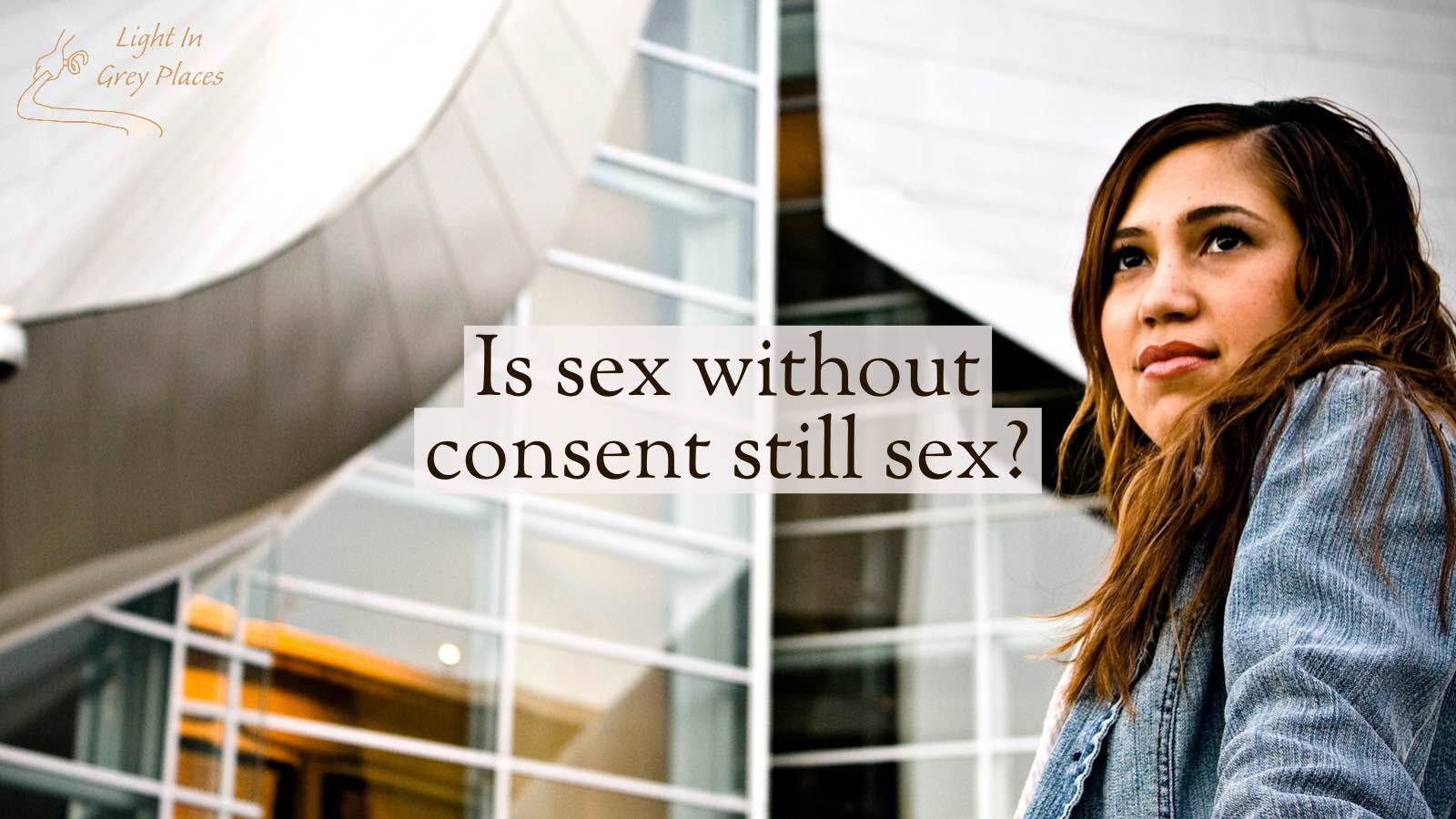 Your answer will depend on what you think sex actually is. And you’d be surprised how many different definitions are out there.

Trying to pin down the difference between “sex” and a mere “sexual act” is not easy. Like Emily Nagoski, I think it’s too narrow to think sex is solely about penetrative intercourse. But as for what then “counts” as sex — actually I don’t know.

Leaving aside the physical angle, we face a more fundamental question when it comes to consent. Is consent an inherent part of the act of sex? Does sex have to have consent before you can call it sex?

The limits of saying “rape is violence, not sex”

When I was growing up, I read a booklet, probably written in the late 80s, early 90s, that firmly said rape was not sex, but violence. This message was intended to help rape survivors understand that what had been done to them was one-sided, not mutual. In other words, they weren’t to blame. I could see the point and I agreed with the intention, but I still struggled with the booklet.

To me, the statement “rape is violence, not sex” erased the sexual element of rape. There were probably two things going through my mind. One was about the physical: rape involves genitals, but a punch in the face doesn’t. But there was something else nagging at the back of my mind. The person who’s best put it into words for me is Natalie Collins. In this post (about whether Jesus was sexually abused, be warned it’s a very long and very graphic post), she made the following point: whilst violence resulting in physical injury—including injury to genitals—can be deeply traumatic, it is a significantly different trauma that experienced in violence where a perpetrator gains sexual arousal or sexual pleasure.

That’s what I felt was being erased this by saying “rape is violence, not sex.” For sure, rape is a vicious and awful form of violence—and rape survivors need to know that. But rape is also sexual. And our language needs to recognise that too.

But can we use the word “sex” the way we use “sexual”?

I’ll admit, linguistically, I find it easier to think of “sex” as a neutral term that can refer to consensual and non-consensual acts.

That way, the meaning of “sexual” derives directly from the meaning of sex. It’s also easier to talk about “bad sex” without pre-judging whether or not the sex was consensual. And when I want to explain that sex is a powerful form of embodied communication, I find it more intuitive to say “sex is speech” than to say, “sexual acts are speech.”

But just because something is easier, that doesn’t make it better.

If consent is embedded into the definition of what sex is, then “sex” is not neutral and “sex without consent” is a contradiction in itself.

As Hane Htut Maung pointed out in a very helpful paper, drawing on the work of Susan Brison: we don’t refer to theft as “coerced gift-giving.” Why? Because the very act of giving requires free expression of agency. If that isn’t there, it’s not a gift.

Similarly with sex, the act of sex requires a free expression of agency—i.e. consent. To remove that freedom from an act of sex is necessarily to turn that act into something other than what sex is.

I won’t lie, I struggle to think about sex this way. Oh, I completely agree that consent is essential for sexual ethics. But I’m also aware that if we use the word “sex” in the ways suggested in Maung’s paper, then we have to make a value judgement about what acts of sexual intercourse should be.

This goes against my instincts. Maybe that’s because I’ve grown up with people using “sex” in a neutral or even disparaging way. I often heard people say that “making love” is more than “just having sex.” With that kind of language it’s easy to frame sex as inherently bad unless redeemed by something else.

Or maybe I’m hesitant because I don’t want people with very conservative views to erase forms of mutually consensual sex as somehow “not sex.”

But despite these hesitancies, I find myself challenged by the arguments laid out in Maung’s paper.

If the term “sex” is neutral, we don’t have to make a value judgement. We don’t have to pause and say, “Wait, but was this consensual?” People can casually discuss situations and stories (and many parts of the Bible) yet still remain silent about whether what they’re discussing is something that respected people’s agency.

And from that angle, yes, I think it’s good to say there’s no such thing as “non-consensual sex.”

Sure, there are nuances to be worked out. Consent is complicated; it doesn’t always come in a binary of present or not present. And I get that some people will want to keep “sex” as a neutral term. I’ll probably find myself using it that way from time to time. I certainly have in the past.

But reshaping language isn’t about policing people’s words. It’s about leading by example, asking questions and expanding people’s vocabulary. That way, people can be more intentional about the words they choose and be more aware of the meaning those words carry.

I’m not just saying this because I care (a lot) about consent. I’m also saying it as someone who aspires to be sex-positive. In a world where so many sexual acts are less than enjoyable and even violating, it’s important to remember that this should not be our normal.

Instead, as we seek to understand our capacity for sex and the fullness of what sex can be, we need to keep consent in the picture. Because without that, we’re won’t understand what sex really is.

If you want some deeper analysis about on how consent works, you might appreciate this post: Sex and consent: how does that work in a long-term relationship?

Photo by Jose Escobar on Unsplash.