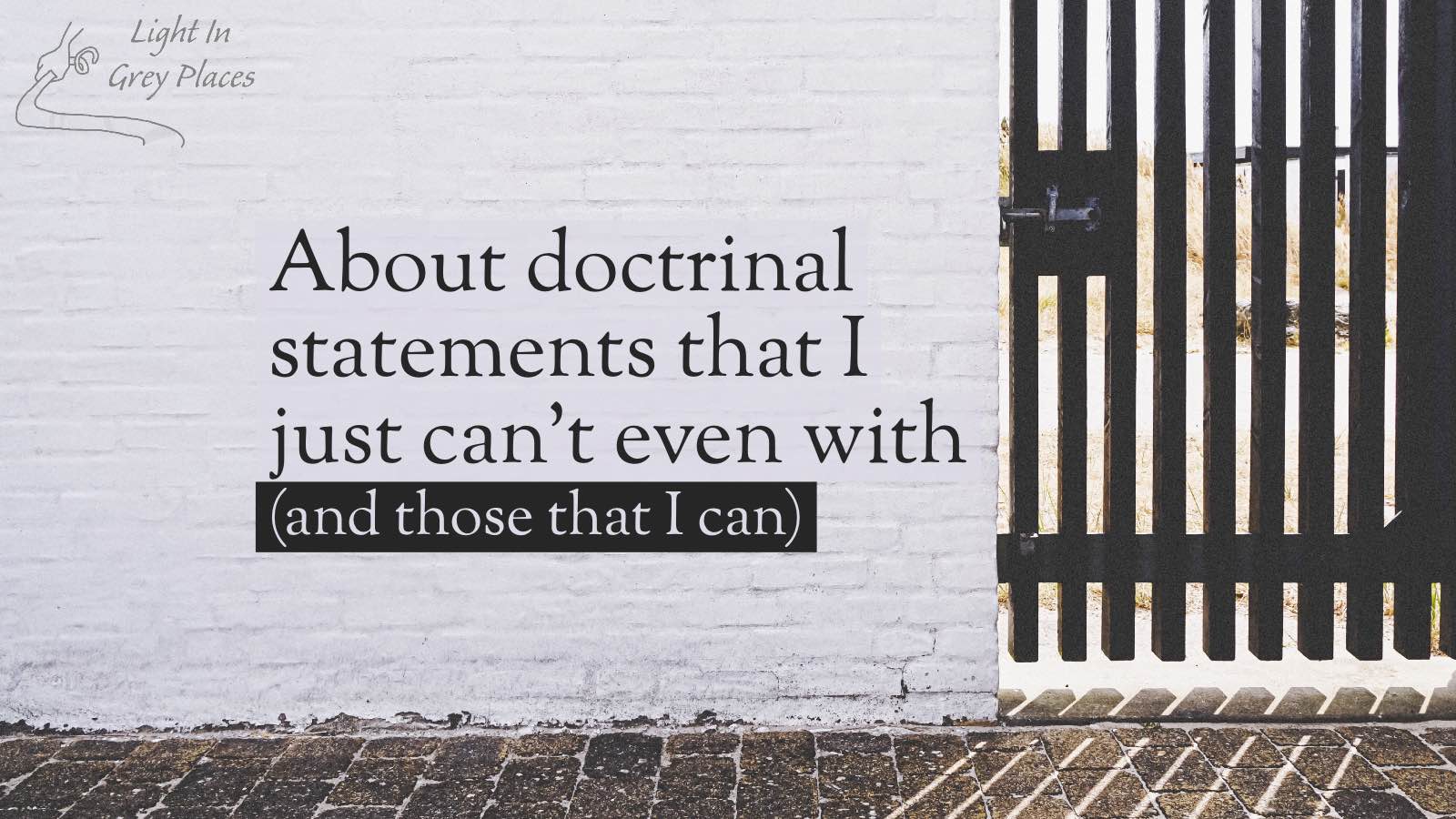 Sometimes it seems a statement of faith
Is a state of unfaith,
A badly built gate
To shut down debate.

Maybe you’ve had that sinking feeling too. Someone you respected and wanted to work with signs up to a ‘statement of faith’ that feels like anything but.

For me, it happened most recently when a pastor I knew put his name, along with thousands of other signatories, in an open letter to the UK government. Amongst a great many other things, that letter said marriage protects from abuse. I came away wanting never to work with any of its signatories.

Oh, and it made me want to weep too.

I have a lot of respect for the written word, including (and maybe especially) when it comes to the Christian faith. A careful articulation of a complex issue can give clarity. It can foster a healthy culture where people know where things stand, even if they’re still puzzling over some of the details. It can lay a good foundation for safe practice.

So with all this to be said for them, why do some public statements of doctrine or policy make me wary? What’s the difference between a welcoming statement and an alienating one?

I don’t have this all mapped out, but I have a few thoughts.

Statements that I’m generally on board with

I like positive statements that echo or describe the hope we have. Like, ‘We believe God loves everyone equally,’ or ‘We believe all human beings are made in the image of God.’ Or if we want to go credal, ‘We believe in the resurrection of the dead and the life of the age to come.’ Amen to that.

I like negative statements when they are specific, aimed at safe practice, and achievable. For example, Methodists can drink alcohol but they can’t bring alcohol onto Methodist premises or, therefore, use it in communion. This prohibition harms no one but for some it makes a big difference.

I like mission statements that know their ‘lane.’ As people, as Christians, it’s important to think through many issues. But that doesn’t mean we make statements on all of them. A few years ago, I had the privilege of meeting Sheila Gregoire, who runs To Love, Honour and Vacuum. Sheila’s work is aimed at heterosexual, Christian married couples. When we met, she told me it was important that she stuck to her ‘lane.’ And I really appreciate this. Even though my theology differs from hers, we have a lot of common ground in this lane. And because she sticks to it, I can support her work (and it’s important work!) without worrying about our differences.

I like statements that leave room for growth. On the home page of my blog I say that I know and love Jesus best when I experience him as a wonderful teacher of the law and, ‘maybe that will change in the future, but it’s where I’m at now.’ In other words, I haven’t got it all figured out. I’m not going to let my future self be bound by my words today.

So those are a few of the kinds of statements I’m on board with. What about the ones I find problematic?

Statements that I find alienating

Statements that war over the meaning of words. For example, the letter I mentioned earlier was about the anti-conversion therapy bill that the UK government is in the process of legislating. The letter argued that banning conversion therapy is a bad idea because the concept of conversion (i.e. turning from one’s old/sinful ways of life to embrace a new life led by and modelled on Jesus Christ) is central to Christianity. Like, how is this a helpful?

Statements that show a flagrant disregard for the creeds and ignorance of the church discourse that formed them. For example, the idea that Jesus is eternally subordinate to the Father. (Interesting that this doctrine was furthered by a conservative denomination that believes wives should be subordinate to husbands.) For more on that, I recommend reading ‘The Rise and Fall of The Complementarian Doctrine of the Trinity’ by Kevin Giles (read a review here).

Statements that overreach how long they’ll last for. Like when the translators of the ESV said their text would never ever change again. The publisher has since retracted this statement, but like… what hubris!

Statements that make it sound like a conspiracy is afoot. Yes, sometimes it’s important to make a statement that stands against something. But I have issue when the thing a statement speaks against is made out to be bigger (and more threatening) than it actually is.

Statements that overstate the usefulness or goodness of something. I love scripture and I believe the biblical canon to be divinely inspired. But I don’t for a minute believe the manuscripts are wholly without error and I don’t, for example, believe one should only ever read the KJV. (I’d also use this category for the idea that marriage ‘protects from abuse’. Marriage can be great, but it doesn’t do that.)

Statements that are deliberately inaccessible to a wide audience. If you want to write an academic paper on the technical meaning of תְּשׁוּקָה, go for it. But if you think something is important enough to be declared publicly as a witness to the wider world, make it understandable. Otherwise, to me it seems little more than vanity publishing.

Statements that put words into other people’s mouths. Write in good faith. That means not making bad faith representations of other people.

So those are a few ideas. And I guess it’s now fair to ask why I felt the need to write this post!

I suppose, we live in a time when words and opinions are everywhere — and there’s often a pressure to make sure we’ve taken our own personal stand on this issue or that issue. The thing is though, much of the time where someone stands is not as important as where they’re coming from and what direction they’re heading in.

When I see wearisome doctrinal statements signed by people or churches I had worked with, or wanted to work with, it feels like a massive slamming on of the brakes. An ending of the conversation. Intended or now, they send the message, ‘We will not work with you’ and close off collaboration.

On the flip side, if someone can be thoughtful and truthful about where they’re at (including the areas they’re not sure about) then there’s much greater scope for fellowship. Yes, there might be tension or ambiguity. And that’s something each person will have to gauge for themselves. But it can be OK not to resolve these immediately.

I really appreciate the relationships where people with different theologies have chosen to get to know me. We’ve learned from each other, even when we haven’t agreed with each other. And if I’m honest, I want more relationships like that. But it’s hard to have those kinds of conversations in the shadow of a brazen statement that feels like a shut gate.

And you know what? It doesn’t have to be that way.

Photo by Henning Kesselhut on Unsplash