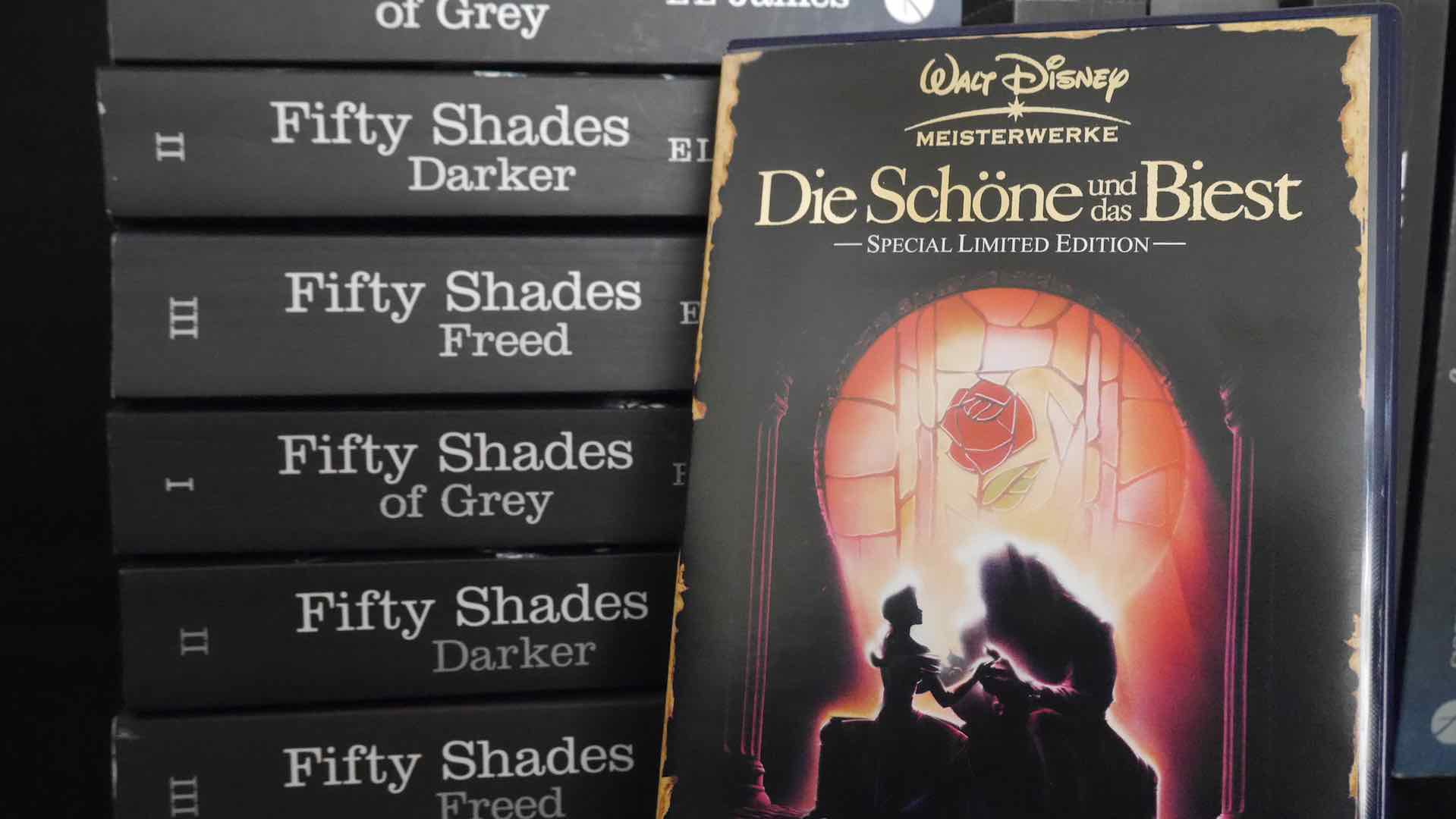 When I started blogging through the plot and themes of Beauty and the Beast, making comparisons with Fifty Shades, and how they did and didn’t speak about redemption, I didn’t expect it would last for eighteen posts. But hey, it did, and if it’s too much like hard work to read all of them, here’s your too-long-didn’t-read, sparks notes, summary of the key points from each.

1. Introduction: Beauty and the Beast doesn’t focus on the enchantment, but on the friendship that grows between Beast and Belle. The ending is the consummation, the natural completion and fulfilment, of the whole plot. Fifty Shades however, focuses on suffering – as if that is sacrificial love. Redemption is beautiful love, not beastly suffering

2. The Guilt of the Fall: In redemption, bad stuff happens as a result of a bad choice. Beast falls because he makes the same bad choice twice, even after being warned, and he is never excused for losing his temper. But Christian’s “fall” is his traumatic childhood, which he can’t be blamed for. It means his “redemption” is to lose undue shame. Beast vs Christian: The Fall that brings guilt and shame

3. The Curse: The Fall brings a Curse. But despite Christian’s awful past, he lives an implausibly successful life and his controlling tendencies don’t stop people from liking him. Beast however gets turned into a monster, his servants into objects and his valley into a wasteland. Because Beast’s curse illustrates an underlying reality and Christian’s “curse” serves the plot. Christian’s sense of entitlement is never called out as a curse. Beast vs Christian: The Curse of plot-serving entitlement

4. The Redeemer’s Virtue: Ana’s virginity is meant to represent her virtue, except it doesn’t work because she has no virtue; plus her vagina doesn’t illustrate the plot, it is the plot. And Christian doesn’t need Ana to be healed, he wants her. In contrast, Belle’s beauty illustrates her virtue. Belle vs Ana: Two embodiments of redeeming virtue?

5. The Redeemer’s Privilege: Redeemers make free choices. Belle is in a position to refuse Beast when he asks her to stay in the castle, but Ana cannot refuse Christian. Belle’s appearance does not give her privilege, but does illustrate her character and sense of self-care. Ana meanwhile abandons her wellbeing. Belle vs Ana: Privilege of position and identity

The redeemer’s choice to redeem

8. The Redeemer’s Choice (part 1 – promise): Ana chooses to redeem Christian, but Belle does not choose to redeem Beast. Because in a redemption narrative, it’s not enough to look at consent – you have to look at promise too. Belle makes a promise of faithfulness, but Ana makes a promise of loyalty to the person she’s meant to be redeeming. And Christian breaks many promises. Redemption vs Romance: Choice, commitment and consent (part 1)

9. The Redeemer’s Choice (part 2 – sightedness): People needing redemption may try to suck others into darkness, but the arc of Fifty Shades is more like an everyman’s brush with death. When compared with a political allegory written by a German playwright, where the protagonist is willfully gullible, it’s striking how Ana fails to see Christian’s darkness. Contrast with Belle who sees Beast for what he is. Biedermann vs Christian: Choice, commitment and consent (part 2)

10. The Redeemer’s Choice (part 3 – wisdom): Christian is possessive towards Ana like Gollum is possessive towards the ring. He can’t bring himself to trust her, like how Gollum fails to trust Frodo. Moreover, Christian thinks he has to be faithful towards Ana (when actually it’s the redeemer’s faithfulness that matters), and he also thinks that faithfulness is control. Not only that, Ana appeases Christian, however Belle (like Frodo) protects herself. Gollum vs Christian: Choice, commitment and consent (part 3)

11. The Redeemer’s Choice (part 4 – suffering): This post compares the submission within passion narrative of Jesus, with that shown in the plot of the hard-core BDSM erotica that inspired EL James to write Fifty Shades. Ana is a slave, Jesus is a son. Ana suffers, Jesus suffers in solidarity. Ana is passive, Jesus is active. Ana works alone, Jesus works with the Holy Spirit. Ana is changed by Christian, Jesus changes the world. And Beauty and the Beast doesn’t have a passion narrative, because it isn’t about opening the door to salvation – but rather stepping through before it’s too late. The Suffering Servant vs Ana: Choice, commitment and consent (part 4)

Redemption in progress – learning to love

12. The rescue – mistakes and rebukes: Beast errs by scaring Belle enough for her to run away. Taking responsibility for his action he rescues her from life-threatening danger. Belle takes Beast to the castle in an act of undeserved mercy; she then rebukes him for his loss of temper and he accepts it. Ana gets drunk, and Christian takes on responsibility to ‘rescue’ her in a display of masculinity. He brings her unconscious to his flat and says she deserves to be punished – even though she’s meant to redeem him. Beast vs Christian: Rescuer, stalker, or masculinity-in-action?

13. The Shame of the Fall: Beast truly comes to know he is selfish (that is, he is genuinely shamed) when he sees Belle act selflessly towards her father. Christian is shamed when he learns Ana is a virgin, except then he turns on Ana angrily. He never sees his controlling behaviour as his true shame. Beast vs Christian: Shame, humiliation, judgement, knowledge.

14. Riches: Beast’s wealth illustrates the plot but Christian’s wealth drives the plot and he uses it to make Ana fit his mould. When Beast does use his wealth to give to Belle he centres her in a humble expression of affection. He also surprises Belle gently and with her consent, where Christian frequently startles and discomforts Ana. Beast vs Christian: Wealthy givers of gifts and affection

15. Objects of hope: Ana is Christian’s embodied hope and, for him, possessing her is redemption. He therefore cannot give her up, controls her and lives in fear of losing her. The one time he is willing to let her go, it’s a plot contrivance and even at the very end he threatens and controls her. Meanwhile Beast repeatedly steps outside of his comfort zone to give up control. And in the end he gives up Belle completely and surrenders to uncertainty. Beast vs Christian: Control or change? Fixation or surrender?

16. Foretastes of glory: In the ballroom, Beast shows how has changed and is becoming who he should be. In wining and dining, Christian glorifies himself with Ana as an extension of his ego. Beast offers Belle a context where she can be truly herself; Christian wrests Ana out of the contexts where she feels most at home. In this, Beast helps Belle realise her dreams, but Christian puts his dreams onto Ana. Their Highnesses vs the Greys: Dreams and egos in the ballroom

17. Transformation of monsters: Beast learns to control his temper and, recognising that he was shown mercy, he even shows mercy to the true monster, Gaston. In contrast, Christian metes out vengeance on those who’ve wronged him. Beast’s redemption is individual and collective, but Christian’s is only individual. The ending of Fifty Shades is implausible and can give people false expectations. The ending of Beauty and the Beast is impossible, showing that redemption is magical and, ultimately, beyond our means. Gaston vs Jack Hyde: Monsters, mirrors and mercy