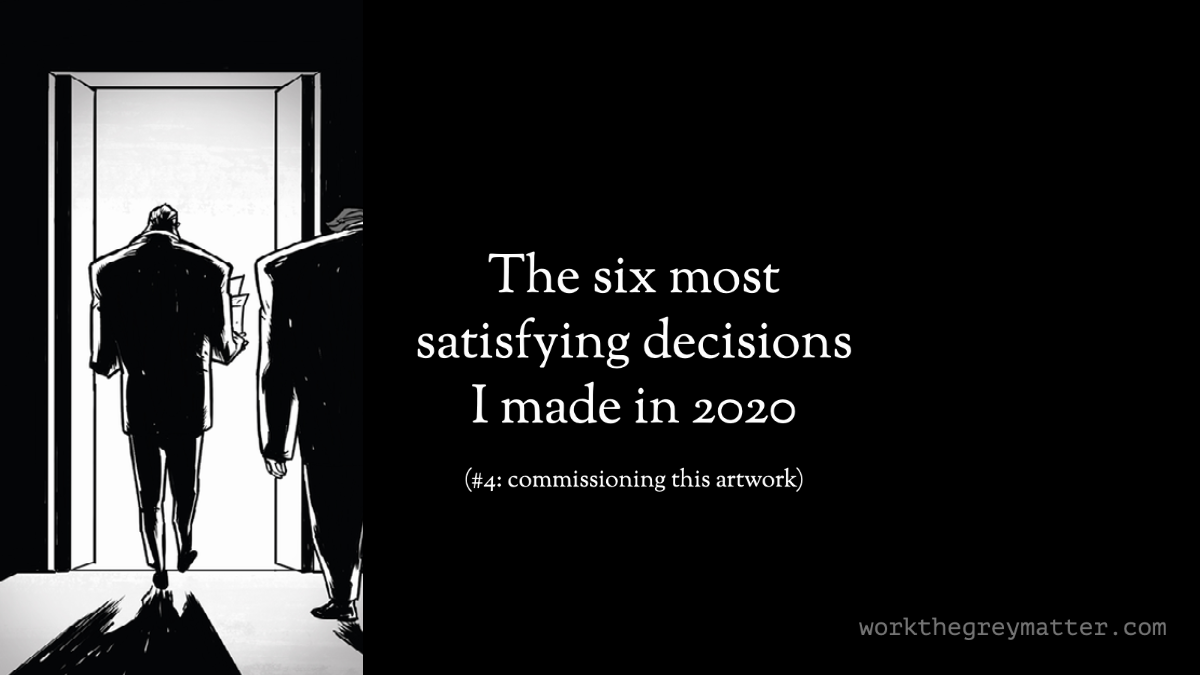 I want to remember some of the positive things that came out of 2020.

Disclaimer: I’m sharing this post because giving myself permission to do these things was a big deal for me; maybe my story will encourage other people. But I wasn’t living under a rock. I know I was lucky to be able to invest in myself in these ways. Investing in other people was also a big priority in 2020 – it’s just not one I want to blog about.

Here are the six most satisfying decisions I made in 2020 (not necessarily in order).

In Christmas 2019 I thought it might be fun to record my favourite carol: O Come, O Come, Emmanuel. Recording my voice has long been a dream of mine. I even bought a pre-amp before I had any microphones to plug into it.

Anyway, by 2019 I had my mac, GarageBand and a Røde microphone – and knew how to connect them. So, I recorded myself.

I watched YouTube videos about how to record and mix vocals.

At which point I figured I’d get singing lessons with a vocal coach and sound engineer.

So I did. We started in person but then switched over to Zoom.

AND I HAVE HAD SO MUCH FUN!

Obviously, it helps hugely that my teacher and I get on well, but… exploring my voice, its range, things like placement… and the incredible functionality of GarageBand… it’s been amazing.

Honestly, there were moments I nearly cried.

I bought my first mac back in 2011 for one reason: GarageBand.

In the following years, my laptop served me well, but gradually got slower and started randomly crashing after I upgraded the RAM.

But buying a new mac meant doing scary things like transferring data and wiping the old hard drive. Plus spending a large amount of money. But the operating system was getting more and more out of date and less secure.

So I finally bit the bullet.

And… it wasn’t a disaster!

Largely thanks to a lot of very helpful articles on Macworld. I really appreciated how their articles catered for pretty much all the options out there.

Meanwhile my new laptop is more stable, more secure and faster. Airdrop also works, making it so much easier transferring files to and from my iPad.

Oh… and the purchase came with a free one-year subscription to Apple TV.

Which leads me to…

My interest was piqued when I learned this series was co-written by Sara Bareilles and featured her music. (And her! She has a cameo in the last episode!)

I discovered Sara Bareilles via the dreaded YouTube algorithm, but I’m not complaining! I also really feel for her because she was about to star in the London West End when lockdown hit.

Anyway, Little Voice is about a twenty-something singer-songwriter, Bess, wanting to break out in the New York indie music scene. But other plot strands include her autistic brother (just amazing) and Indian lesbian flatmate (I really appreciated her).

Season one is reasonably standalone, but has loose ends. Season two hasn’t been confirmed, so I’m going to guess it won’t be made. You’ll find a helpful review on Roger Ebert’s site.

For me, it was all the feels.

I just totally felt Bess’s ache to be all that she could be and her struggle to cultivate her skills into something marketable. I identified with the tension in how she wants to be willing to do small things that serve other people, but knows it’s not her passion.

As you may already know, Siku did the original artwork that I use in my blog’s branding.

He’s a British/Nigerian graphic artist and writer, best known for his work in 2000 AD. He’s also published several manga versions of the Bible. His website is here.

Anyway, a few years ago I wrote a poem. It’s an allegory that’s, er… um… based on Romans Chapter 6 and set in an insurance company. With a couple of nods towards The Incredibles.

If that sounds weird, well, my brain is weird.

I tried shrugging the poem off as just a bit of fun, but each time the Holy Spirit came back to me with, “How about you do this next?”

Which meant that by the time lockdown started, I not only had a redrafted poem, but also a series of sketches to accompany it.

And it’s the combination of the words and images that really makes this thing come alive. Then in April I thought, “What if I commissioned Siku to draw them?”

Answer: in a worst-case scenario, I pass a chunk of money (that I can afford) to a black freelance artist, in the middle of pandemic.

I figured that was a risk worth taking.

And I’m pleased with the result.

For example, I wanted to conjure the image of the office workplace as being like a factory full of drones.

So I drew this:

Which I think is kinda cool.

But Siku drew this on a double-page spread:

Similarly, this was my attempt at a greedy corporate boss:

So anyway, my poem is now a beautifully laid out a 32-page PDF.

As I said, it’s an allegory of the gospel, anchored around Romans 6.

And Jesus is black.

It still needs a cover. I also need to find its market. But it’s complete. If you’re interested in finding out more about it, please feel free to contact me.

When I shared it in a small group, they loved it.

Which leads me to…

Four sessions, each a fortnight apart, we read through Ruth Perrin’s book Changing Shape: The Faith Lives of Millennials. There were about, um, 30 or 40 people participating (I think), with the Zoom sessions led by Dave Benson from the London Institute for Contemporary Christianity.

LICC is a small UK evangelical organisation, originally founded by John Stott. In my book, Stott was definitely one of the good guys, even if I disagree on some of what he said. Anyway, LICC seeks to empower Christians in their everyday lives, wherever they are, Monday to Saturday.

(It’s also one of the few remaining links I have with UK evangelicalism.)

Changing Shape was the product of Perrin interviewing 47 millennials (born 1981 to 1995). They had all been “active affirmers” of their Christian faith when they were teenagers. The book looks at how their experiences, beliefs and faith journeys developed – including some who are now ex-evangelical, ex-church or even ex-Christian.

It describes a real breadth of experiences, reflective of the UK, and I felt seen amongst them. I’d recommend the book for anyone wanting to understand Christian millennials and/or UK evangelicalism.

I’d also recommend the LICC Open Book format. At the moment, they’re going through Culture Making: Recovering our Creative Calling and I expect they’ll do others further down the line.

The meetings included context setting, prayers and breaking out into small discussion groups. Ruth Perrin came and spoke in the last session.

What I hadn’t expected though was an invitation to share Broken Brokers. But I did. And it was awesome.

Honestly, the feedback and affirmation was huge for me. It’s not always easy to keep on writing; I mean, this is my first post here in four months.

Though, there is a particular reason behind that…

I’ve wanted to have a dedicated space for creative, faith-oriented, content for some time now. I’ve mingled some pieces amongst the Starlight content on this blog, but truth be told, they don’t attract readers. Or at least, they’re not what people want from Light in Grey Places.

I wanted to have a place where I could put my creative writing and not feel guilty if no one reads it. Also, I wanted something that had the potential to become a community space. I’ve seen some amazing art and poetry in the depths of Facebook. I’d love it to have a bit more breathing room than the algorithm allows.

Meanwhile, I had this nagging feeling that Christmas 2020 was going to be very strange for an awful lot of people. And I wanted to do something about that.

So… I decided to write a 40-day devotional and study-series about the Christmas story. And launch it on a sister-site Faith in Grey Places.

But I have learnt so many things through doing this. I’ll probably have to write just on that sometime. But… I’m really proud of what I’ve achieved.

So these were the most satisfying decisions I made in 2020. Not necessarily the most important, but definitely ones to celebrate.

What were the things you’re glad you decided to do in 2020? How do you want to be invested in during 2021? I’d love to hear – you can drop a comment below but if you want to connect more meaningfully, send me a DM via Facebook or Twitter.