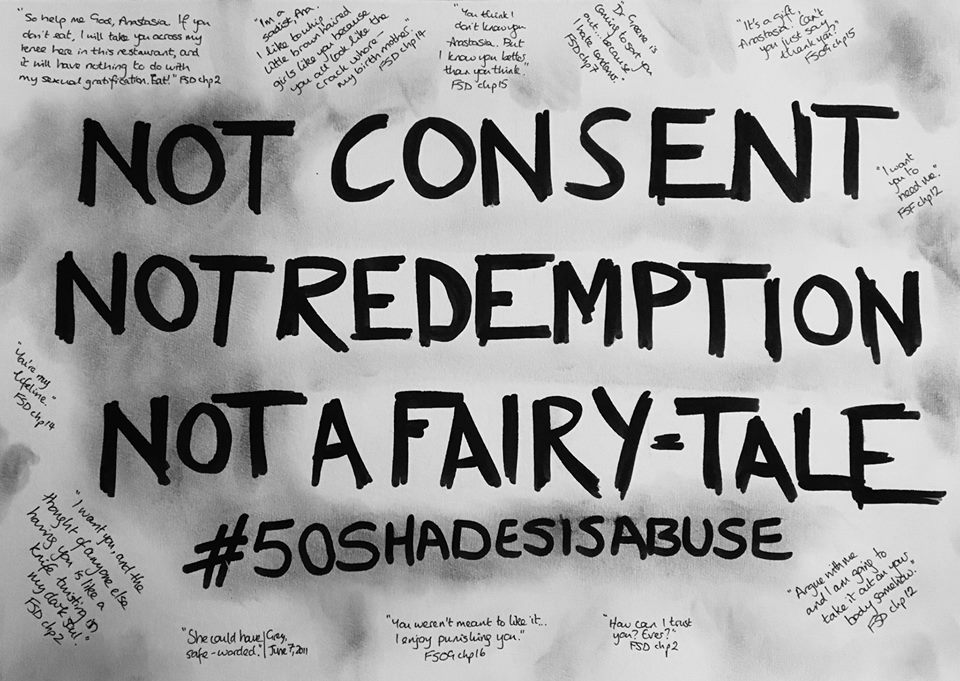 We were outside the Odeon cinema in Leicester Square, London. The waist-high metal railings had been carefully placed to allow space for fans, space for VIP vehicles and narrow passages at the side for the general public to mill past. The fans who had got there early were already inside enclosed areas while the security detail urged people outside the railings to move on if they didn’t have tickets. Every now and then, you’d see one or two people together dressed in very expensive outfits and you know they actually had tickets to go inside and see the film. Everyone else was wrapped up in gloves, coats and scarves – it being February after all.

The giant screens played the Fifty Shades Darker trailer silently but on repeat throughout the evening, much as had been done with its prequel two years before. And music thumped its way across the square, providing many (myself included) with a well-needed excuse to bob up and down and keep moving.

There weren’t as many protestors as last time either but, again, there were enough it seems. This year we were in a small area enclosed by railings and rather in the midst of fans. When we were shown in, some of them were disgusted that we had a better view than they did. For myself, I wondered whether it would turn ugly or if anyone would try to snatch at the sign I was holding up. Having started as just a banner, I had come to see it as a beloved piece of art and it certainly caught the crowd’s eyes as they passed. Not long into the protest a woman in her 20s saw it and exclaimed “Thank you!” It’s the moments like that which keep you going.

But in all seriousness, I was grateful that I live in a society where we were allowed rock up in the first place, where it all stayed peaceable even when we were holding up banners a mere spitting distance (literally) from our opponents.

That said, our “opponents”, if that’s the right word, weren’t really the fans. Our real contention was not even with EL James, even though I do believe that her books are a stumbling block in the path to gender equality. Rather, our issue was, and remains, the toxic attitudes that underlie many of our narratives of romance, power and gender.

One woman passing by said it was good that we were doing what we were doing, because abuse is real and awful and damaging. She also quite blatantly said that Ana was not abused because she “opened her legs” to Christian. As if that was all there was to it; as if the context didn’t matter; as if consent under duress was consent. Why do people hold so firmly this idea that a woman must actively refuse consent if she is to be considered blameless?

I’ve been reading through John’s gospel recently. OK, it was written with the purpose of bringing people to believe certain things about Jesus, not Fifty Shades, but it’s got me wondering. You see, in it you have the recurring themes of people who have unbelief and people who believe. And when I say “unbelief”, I’m talking about wilful unbelief in the face of startling evidence. The kind that might witness a man being raised from the dead and walking out of his tomb, but still say it was a trick, or that Jesus was in league with the devil. The kind of unbelief that was hell-bent (if that’s the right phrase) on seeing Jesus die.

Are there other areas where people hold such stubborn, wilful, unbelief? Is consent one of them? Is women’s sexuality one of them? It would seem so.

And on the one hand this comforts me because it means I have more of a clue of what I’m actually fighting against when I stand up and protest on these matters. I am spared the exhaustion of astonishment as people continue to make the most absurd statements. On the other hand, it unnerves me because there is simply no logical way out of such a closed mindset. It’s not something that can be reasoned with. Neither will it yield to force, not that I’d want to use that anyway.

I think the answer is that it’ll be different for everyone.

One thing that means is that each of us who campaigns, who speaks, who engages has a part to play. We each engage in different ways, in different contexts and with different people; the task is impossible for any one of us to do alone, or indeed for any one social group to do on its own.

During the protest, Natalie Collins – the founder of the Fifty Shades is Domestic Abuse campaign (@50shadesabuse) – said that one thing she hoped to achieve through the protest was to ‘plant seeds’. It’s interesting to think that different seeds germinate in different environments. And the most resilient plants are those that grow from cross-pollination. I honestly believe that our diversity really does give us strength.

That isn’t to say we’re all going to be equally strong or equally effective. But you know what? That doesn’t matter. Things like wisdom, belief and hope – they start small, but they grow. And whereas some plants will stand tall for thousands of years, others will flourish and wither in a matter of days. That’s OK. That’s even how it’s meant to be. What matters is that when each of us participates in this great, grand scheme, we do so in a way that contributes, that refreshes, that gives life, that enables growth in others – not in a way that stifles or poisons.

It’s easy to feel small in a crowd that’s much bigger than you. When the press are deliberately avoiding shots that would show you’re even there. When you’re wearing an unglamorous t-shirt in a little penned-off area at the side, and there are others walking the red carpet in designer clothes. When the number of tweets in your campaign’s hashtag is a tiny fraction of those relating to the film you’re protesting against. Yes, it’s easy to feel your smallness and think you’re achieving nothing of value. And maybe the protest was peaceable simply because we weren’t seen as a threat.

The thing is, I’m not ashamed of small things. Small is not the opposite of great, and all the greatest works have small beginnings.

Yes, it means that those who find us are mostly those who make the effort to look for us. But that’s OK. The trick is to be recognisable when they find us.

Then they’ll know what they’ve found.