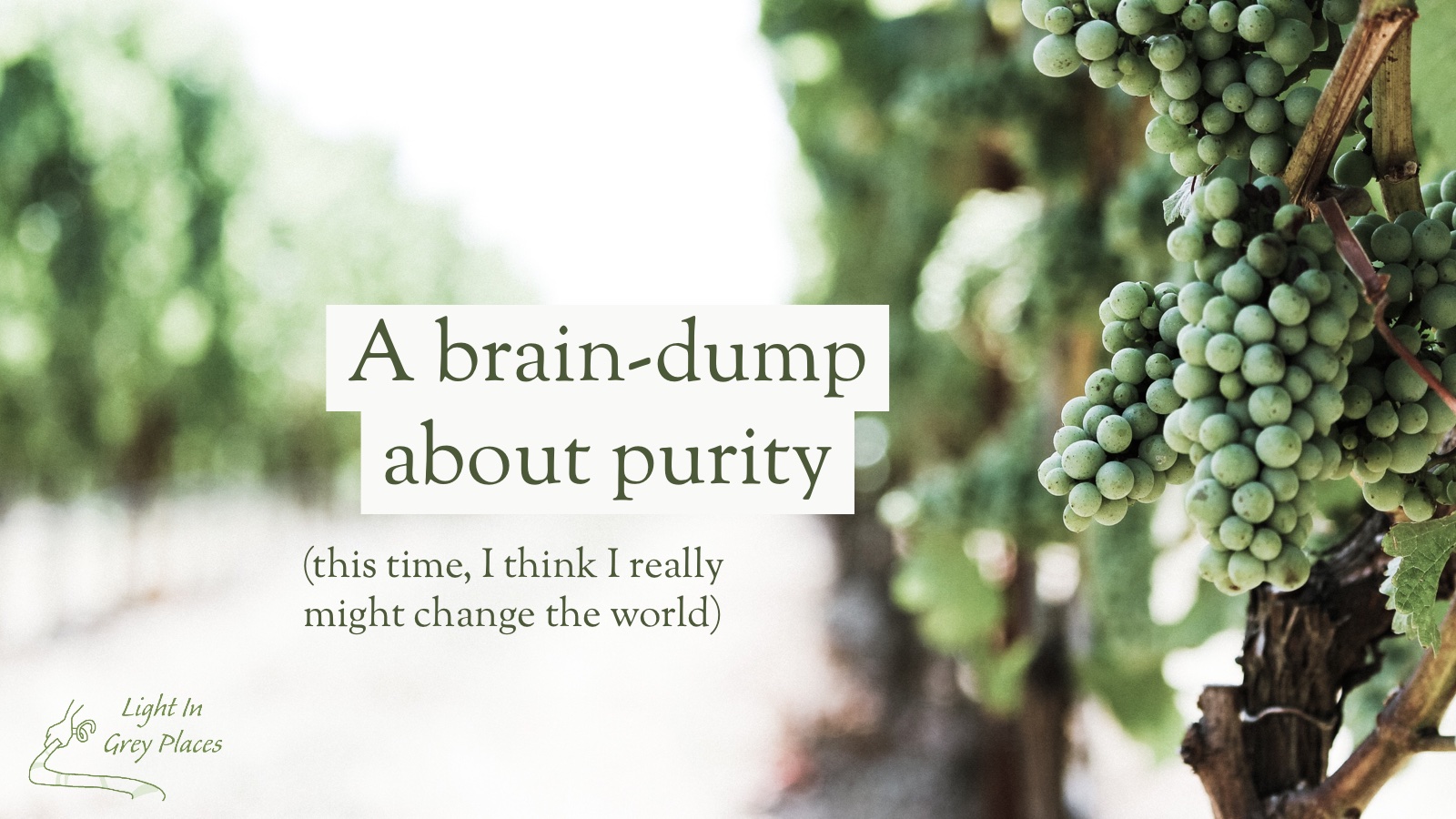 When I was a plucky secondary school pupil, I had an idea for a perpetual motion machine. I was beyond excited. I was going to solve the world’s energy problems. I was prepared to accept that maybe there was a glitch in my design that I hadn’t realised, so I prayed earnestly that if I was wrong then God will tell me that very same day.

That afternoon my older brother told me it wouldn’t work.

I didn’t believe him to begin with, but gradually reality sank in as he explained. As Scotty would say, “Ya canna change the laws of physics!” Unknowingly, I had been trying to break the first rule of thermodynamics – that energy cannot be created or destroyed.

Is that me or is that not me? I don’t care! The world is going to change – and that’s what really excites me.

So, what’s this big world-changing idea?

I’ve tried to blog about it before and I’m hoping I’ll blog about it in various forms over the coming months (years?): it’s all about purity.

For many people, purity is a dirty word. It is oppressive; it is a culture; it robs women of their agency; it stifles and demeans the body; it is exclusionary; it is judgemental. It is hell.

You know those shouty, angry words the Old Testament prophets seemed to speak so often? Have you ever been nervous thinking they reflected a ranty, wrathful god? No, they don’t. They reflect the love of a Father-Son-Spirit who is grieved, incensed, appalled at the wilful destruction we people seem so willingly and so self-righteously to inflict upon one another. The words of anger have a place. And they pierce injustice at its throbbing, beating core.

But real purity? I think I know what that is.

I am currently hypothesising that purity is fundamentally about belonging to God. Perhaps it’s not quite that – perhaps purity is about knowing. These thoughts are so young and the words are so multi-faceted, I don’t want to place my bets just yet.

I believe that purity is relational. It’s a privileged status between persons – but it’s also something that can deepen.

And the triumph that we look forward to is that not just that we will know God but that God will know us. That is the culmination. This is what I think purity is about.

But why do I choose the word “purity” to mean all this?

I mean, it’s all very well to pick a word and give it your own meaning – that doesn’t mean the meaning fits. It doesn’t mean your definition is in line with other people’s thinking. Why use ‘purity’ when there are other words are widely used to mean almost the same thing?

Well, it’s because ‘purity’ has almost always been somewhere in people’s thinking when they draw the lines between who’s ‘in’ and who’s ‘out’. Purity of ideology, purity of race, purity of sexual relations. ‘Purity’ is the language we use to say who belongs and who doesn’t. If I’m going to overhaul the language of exclusion, then I should take back the words the purity culture has sullied.

But there’s more than that. Purity culture associates the word ‘purity’ with the actions of our genitals. If I can reframe purity, then it will beg questions about sexuality.

And (and this is the bit that clinches it for me) I think that one of the purposes of male and female sexual organs is for them to serve as complementary images for purity.

(Though, make no mistake, I am not endorsing complementarianism.)

The Old Testament was filled with images that help us get our heads round complex ideas. Blood was a symbol for life – and if you think about it, it was a rather good one. Oil was a symbol for healing. The temple a symbol for God’s dwelling among us. The sun a symbol for light. In each case the symbol has a mysterious relationship with the bigger reality. The symbol has its own scientific and historical significance – and that is real! But at the same time the symbol is never the fullness of what it represents.

In a similar way, I think the male and female genitalia are also associated with images for belonging – for purity.

I suggest that there are two parts to purity: entering purity and remaining in purity.

And maybe the female image is not about ‘remaining’ but about ‘waiting’.

But here’s the bottom line: I think they are a pair of images that go together to help us understand what it is to be pure, to belong to God.

After all, the Bible goes on about:

These are the realities that underlie the new covenant images of… have you clicked yet? Baptism and communion.

So why am I so excited right now?

Because I’m reading a book called “Justification: God’s Plan and Paul’s Vision” by Tom Wright (published by SPCK, 2009) and the whole book is littered with this two-component pairing.

The book was written as a polite response to John Piper who was saying that Tom Wright was undermining reformed church theology. I am no fan of John Piper, but I was curious to know more about the actual definition of “justification” recently and when Alastair McGrath’s work on the matter seemed too dense, I opted for this one instead.

Little did I know what I was buying!

(I also bought three other books at the same time, including another by McGrath – don’t judge me.)

This book is a dream – I love it! I mean, OK, it’s frustrating a little bit because Tom Wright is setting out so much of what I am positing about purity and whereas he’s clicked that circumcision was the sign of entry into God’s covenant people (along with the passage through the Red Sea), he’s totally missed the female image. But then I should practice what Wright preaches about Paul and understand him “in terms of his own context and argument” [Justification, p111]. He’s not looking for a new theology of purity. He’s looking to refute the idea of ‘imputed righteousness’.

I’m just hopping up and down because as Wright exegetes Paul’s letters it’s like he’s making my case for me. And the slam-dunk awesome bit I’d never got before was 2 Corinthians 5:21:

God made him who had no sin to be sin for us, so that in him we might become the righteousness of God. (NIVUK)

For He made Him who knew no sin to be sin for us, that we might become the righteousness of God in Him. (NKJV)

Now, this is not what you’d infer from the NLT:

For God made Christ, who never sinned, to be the offering for our sin, so that we could be made right with God through Christ. (NLT)

Rather, what Paul is getting at is what you’d infer from the NTE translation (read it carefully):

The Messiah did not know sin, but God made him to be sin on our behalf, so that in him we might embody God’s faithfulness to the covenant. (NTE)

(“What translation is the NTE?” I hear you ask, it’s the “New Testament for Everyone” written by… erm… Nicholas Thomas Wright.)

So: Wright says that instead of verse this being a single statement that we exchange our sin for Christ’s righteousness, the verse makes two separate statements. One is that Christ worked to remove our sin (in my book: “make us pure”) and the other is that we now embody the righteousness of God (in Wright’s words: “God’s covenant faithfulness”, “God’s action in reconciling the world to himself”). [Justification, p140]

And that’s exactly what I want to say about the ‘female’ part of purity.

Dear God, if this idea is a complete non-starter, please let me know by the end of the day?