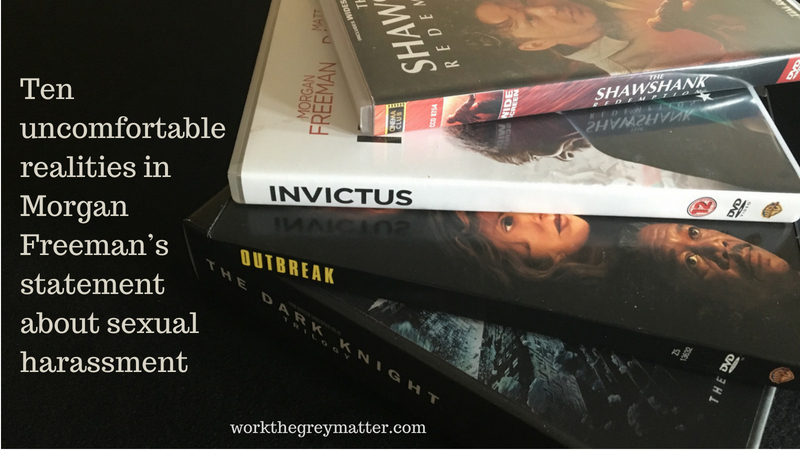 In the wake of the Harvey Weinstein allegations and the #MeToo movement, a story broke recently where eight women accused Morgan Freeman of inappropriate behaviour and sexual harassment.

His initial response was:

Anyone who knows me or has worked with me knows I am not someone who would intentionally offend or knowingly make anyone feel uneasy. I apologize to anyone who felt uncomfortable or disrespected — that was never my intent.

Still, the story didn’t go away and a few days later he issued a second statement.

His words illustrate uncomfortable realities about sexual harassment, power imbalances and how our society responds to these cases. And I have some thoughts about all that.

The second statement Freeman issued was this:

I am devastated that 80 years of my life is at risk of being undermined, in the blink of an eye, by Thursday’s media reports.

All victims of assault and harassment deserve to be heard.  And we need to listen to them. But it is not right to equate horrific incidents of sexual assault with misplaced compliments or humor.

I admit that I am someone who feels a need to try to make women—and men—feel appreciated and at ease around me.  As a part of that, I would often try to joke with and compliment women, in what I thought was a light-hearted and humorous way.

Clearly I was not always coming across the way I intended.  And that is why I apologized Thursday and will continue to apologize to anyone I might have upset, however unintentionally.

But I also want to be clear: I did not create unsafe work environments. I did not assault women.  I did not offer employment or advancement in exchange for sex.  Any suggestion that I did so is completely false.

Here are 10 difficult things I see in Morgan Freeman making this statement.

1. I don’t want to believe that Morgan Freeman is a bad person

I’ve enjoyed his films. I respect how he’s made his way in Hollywood despite being black and despite not landing a major role before later on in life. I don’t want to have ditch all of that. The sad fact is, however, that perfectly ordinary people can do awful things. Wherever Freeman might be on the scale, allegations like this don’t happen to stroke a fake victim’s ego. Which means we’re all going to have to wrestle again with the fact that we’re not all good, however much we’d like to be, or be seen to be.

2. Apologies do not change the past and will not be enough for some

Yes I believe in the huge healing potential of forgiveness and reconciliation, but I also know these are hard and complex roads to walk. And I don’t believe that each and every person will truly understand forgiveness in their lifetime, which means we’ve got to learn how to support people in their pain. The world would be a lot easier if this wasn’t necessary, but the hard truth is that wrongs harm people. It’s not nothing. That’s why we’ve got to make every effort to prevent these kinds of wrongs from being in our future.

3. Whatever happens to Freeman’s career will be imperfect

4. Being shaken can look a lot like denying responsibility

If I thought my entire career and public standing was about to crumble, I’d be doing everything I could to contain the damage, to exonerate myself and to keep the distinctions between what I did and did not do. Being accused is a hellish experience, whether you’re innocent or not. Meanwhile, when you’re under all that pressure it’s easy to express yourself badly. So how do you tell the difference between (a) someone who’s shaken and desperately clutching for straws and (b) someone who’s just trying to minimise and dismiss? Answer: usually you can’t.

Freeman could be in the world of simply not getting it. But he could be in the world of someone who has genuinely made mistakes he did not appreciate and is genuinely trying to learn. What bothers me is that Freeman’s vocabulary seems to be “assault” and “not assault” and I don’t see society looking for better words or more categories. Not all abuse is equal. I wonder: if Freeman had better words, would he sound so much like he was denying all wrongdoing?

6. At best, Freeman didn’t think he was doing anything wrong

In one incident, [Chloe Melas] said Freeman “kept trying to lift up my skirt and asking if I was wearing underwear,” adding that he never successfully lifted her skirt. “Alan [Arkin] made a comment telling him to stop. Morgan got freaked out and didn’t know what to say.”

If Freeman was unsettled, he wasn’t expecting to be told to stop. The best interpretation here is that he didn’t think he was doing anything wrong. (The alternative is he knew and just didn’t expect to be called out on it.) He was making his comments in public. He bantered in front of his colleagues. If he was doing this, he thought it was OK. And I’ll bet good money that if he thought it was OK it’s because he’d been taught by society that it was OK. I’m not saying he’s guiltless, but these kinds of standards don’t come from a vacuum.

7. He DID create an unsafe environment and this is easy

Women felt they had to modify their behaviour on account of him. Women don’t do that because they feel safe. The problem is, when you have this effect it’s hard to notice, because you only see your environment whilst you’re affecting it. Let’s assume he really never offered advancement for sex and that there are some forms of assault that he never broached, that doesn’t mean people felt safe. One of the first things I was taught when I volunteered for a DV charity is that as soon as I pick up the phone, I’m at the top end of a power differential. I had to seek to put balance into the conversation so that callers didn’t give my voice undue weight and so I didn’t trample over their views – even inadvertently. This should be mandatory learning through all kinds of career advancement.

8. His environment enabled him to act this way

Abuse always happens in community. That’s why it is never the result of one individual. The system, his colleagues and society, created an environment where he was not prevented from doing what he did. Freeman bears culpability, but he’s not the only one who’s culpable. I’d like a discussion, for example, on how to spot when intended humour is falling flat (this can happen) and when certain types of humour are wholly inappropriate for the context. Instead, it seems feminists are being accused of forbidding all forms of banter.

9. His apology maintains the gap between intent and effect

But I also want to be clear: I did not create unsafe work environments. I did not assault women. … Any suggestion that I did so is completely false.

Any “suggestion” is “completely false”. This a very strong statement (and appears untrue based on some of the accounts cited above). The point is, he did not mean to and he doesn’t want to be regarded as though he did knowingly intend to (assuming he’s being truthful). It seems he is trying to acknowledge that harm was done because he knows he has upset people and says he will continue to apologise, but this doesn’t go far enough because he rounds off with defence. What we don’t have, but we need, is a way to discuss not just the actions that were reported (and their effect), but the circumstances, assumptions and choices that led up to them.

10. These women felt able to speak and be heard – others don’t

Stories like this don’t break in a convenient order, starting with the worst abuses and working down. I think it’s a good sign that these women felt able to speak about what happened and call attention to it. It was still hard to report: of the eight women, only one allowed her name to be given, but they did it. Others aren’t able to speak up, or their abusers aren’t such headline-grabbing names that the press will take an interest in. Wherever we end up with Morgan Freeman, we need to remember this is but one story in a wider collage. If that picture is to change, we all need to play our part.

If you want to know what sexual harassment looks like in the workplace, I’d recommend the videos and analysis in this post #ThatsHarassment: David Schwimmer makes six short videos showing sexual consent violations

By the way, the Evening Standard had a fascinating article about guidelines for sex scenes in theatre and film, which are even being adopted by Lamda (London Academy of Music and Dramatic Art).

If you’re curious about the volunteering I did with a DV charity, you can read my reflections on that here: I think I need to grieve: what one year in a DV charity does to you

Meanwhile, if you want some detailed reading on what grooming is and what it looks like in practice, I analyse Christian Grey’s behaviour in Fifty Shades in this post: Beast vs Christian: The dark art of grooming