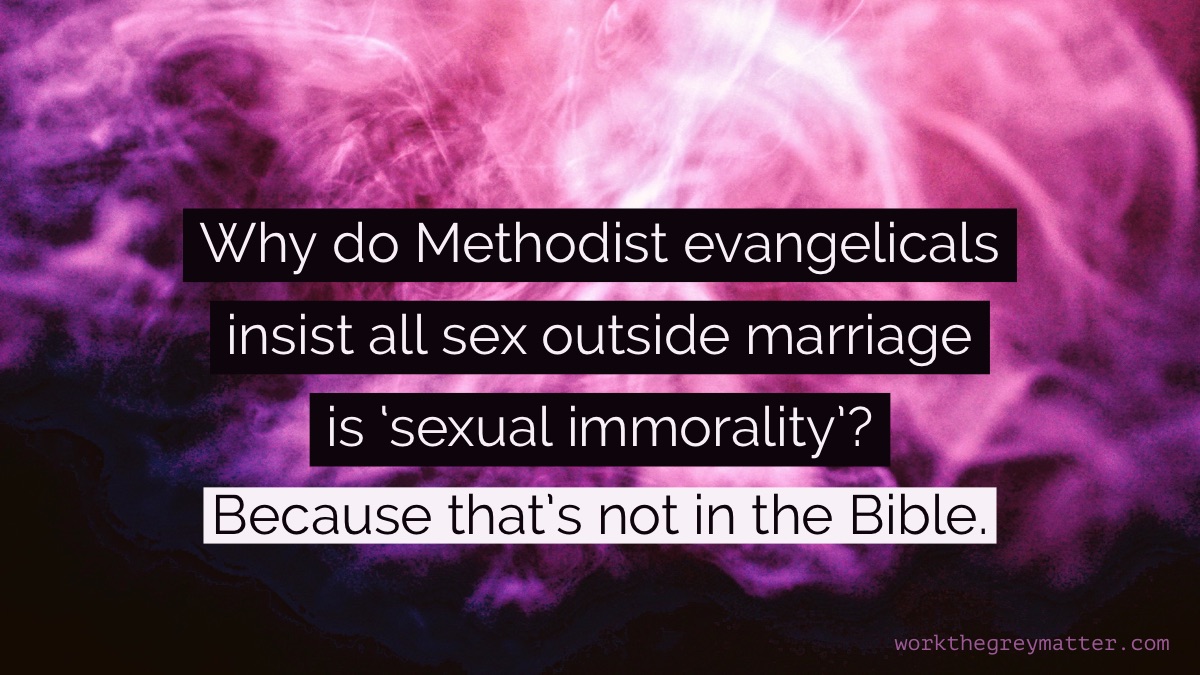 The Methodist Conference in Great Britain recently commended a report about marriage and relationships, God In Love Unites Us, by 247 votes to 48. The headlines have focussed on how this report commends same-sex marriage, but it’s actually much broader than this. For example, it also discusses cohabitation, developing resources for married people, and even developing liturgies for when relationships end.

Meanwhile, Methodist Evangelicals Together have issued a statement and article in Premier Christianity saying that the report was one-sided, ignored testimony, and biblically unsound.  They’re calling on evangelicals to “make the case for a biblical view of marriage and relationships” rather than echo society’s views. [Edited to add: I should probably caveat here that that not all Methodist Evangelicals agree with the stance that MET has taken. Certainly, I saw tweets to the contrary as the report and article came out.]

Now, I might have my own problems with the report (the section on good sexual relating doesn’t mention consent), but I also recognise that it’s attempting to tackle and contextualise big and very sensitive issues, whilst still being accessible to read. And on the whole, I reckon does very well at this. What’s more, far from being unbiblical, I think the report is conceptually groundbreaking in how it de-couples sexual ethics from marriage.

Make no mistake, the report doesn’t give a free-for-all. For all my talk of ‘groundbreaking’, much of what the report says about sex is still well within the bounds of Methodist evangelical sexual ethics. It explicitly says “promiscuous, exploitative or demeaning” sex is unacceptable and emphasises exclusivity (albeit, not marriage) as a pre-requisite for sexual flourishing.

What I want to ask is simply this:

Why do evangelicals insist on directly linking extra-marital sex to sexual immorality?

Which biblical texts are descriptive and which are prescriptive?

After I read the Methodist Evangelicals Together (MET) article, I went and had a read of their study guide “Remaining Faithful Marriage & Methodism”.

Drawing a distinction between descriptive and prescriptive passages (a prerequisite for any half-decent biblical interpretation), it says the Bible is relevant, clear and consistent on the subject of marriage and that:

Scripture as a whole depicts monogamy and singleness as God’s ideal. [p5]

The thing is though, distinguishing the prescriptive from the descriptive is itself a matter of interpretation. Even prescriptive texts need interpretative care, recognising their cultural context, to determine how they should be applied. And you know what? I’m not sure that any of the laws, statements or judgements in the Bible concerning sex and marriage are either wholly descriptive or wholly prescriptive.

I appreciate then that my view of the Bible is probably more conservative than some liberals and progressives, including the authors of God In Love Unites Us. I don’t pass off Leviticus or Deuteronomy as superseded or irrelevant in the context of what Christians call the New Covenant.

But you know what I find telling?

When conservative literature, such as the MET marriage study guide, says the Bible requires celibacy outside of marriage, much of it will readily refer to Leviticus 18’s prohibitions against incest, bestiality and sodomy, even though the passage has little to do with marital relations and everything to do with family dishonour, idolatry, and male ritual defilement. However, I am yet to find a single piece of moderate pro-marriage literature which bases its argument on the Deuteronomy 22 laws — those are the ones about sex with virgins, and what to do with a daughter who has sex prior to marriage (it ain’t pretty).

Why then, why is the debate about sex outside marriage so dominated by Leviticus 18 and not Deuteronomy 22, which (on the surface) seems much more relevant? Is it because conservatives know that feminist thought has become a force to reckon with, at least to some extent, but queer thought hasn’t made as much progress?

The Bible is clear… but…

If you ask me, both Leviticus 18 and Deuteronomy 22 have profound truths to teach us about God, holiness and compassion, but only indirectly do they tell us about anything about how links should be made between sex and marriage. It’s not that I think the Bible isn’t clear; I think it is clear, but it’s clear about the things it was trying to speak about.

Leviticus 18 was a prohibition against the idolatrous practices of the pagan nations, which were often also sexual practices. You will see this prohibition repeated throughout the Bible: in the law, the writings, and the prophets; in the gospels, in the letters and in that strange book of apocalyptic prophecy.

As for Deuteronomy 22:13-30, the whole passage unravels when you realise it’s about restricting parental and spousal ‘honour’-violence against women and daughters, and prohibiting all forms of private ‘honour’-violence. (And there is a wealth of Jewish biblical scholarship to support this assertion.)[1]

Yes, the Bible is clear, but it’s not always speaking about marriage.

Sexual immorality vs sex outside marriage

If you ask me, such an act falls squarely within the Western modern concept of ‘cheating’ and ‘adultery’ (after all, modern-day relationships usually come with an expectation of exclusivity) yet it’s simply not discussed in the Old Testament. Why then are we so quick to assume we think we know what the Bible means by ‘adultery’ and ‘sexual immorality’? Because if these terms refer to all extra-marital sex (as evangelicals are so quick to assert) then this is a pretty big omission — and it’s not the only one.

Before anyone thinks that I’ve forgotten about prostitution: the Old Testament says parents shouldn’t force their daughters into prostitution, or bring such daughters’ wages as an offering to God; it also has zero tolerance for shrine prostitution and for the daughters of priests prostituting themselves (note: both have associations with worship). However, unless we work from laws that prohibit idolatry and oppression of the poor, the Old Testament law doesn’t actually outlaw prostitution or other extra-marital sex involving an unmarried woman who is eligible for marriage.

How the Bible identifies ‘sexual immorality’

So, the way I see it, instead of slamming all sex outside marriage as immoral, the Old Testament identifies three markers that indicate sexual immorality:

Now, I’ll admit, the ethic of marital monogamy and celibate singleness has a lot of overlap with the ethic above but it’s not the same. What’s more, we should be wary of suggesting that either of these frameworks is complete in and of itself. Even if we try and go for the ‘spirit’ of these ethics rather than their letter, then at best they are seriously vulnerable to misinterpretation because, amongst other things, they don’t mention consent as we know it.

What’s more, I cannot think of a single New Testament reference to sexual immorality that doesn’t fit with the three markers I’ve given above. Romans 1, Galatians 5, Matthew 5, 1 Corinthians 5-6, John 8, Revelation 22 — all of them are consistent with the Old Testament.

And even if I’m exaggerating here, and 1 Corinthians 6 does in fact go beyond the Old Testament’s standard when Paul prohibits church members from visiting prostitutes, bear this in mind: that chapter was written to a church whose sexual ethics fell below the standards of the pagan nations (1 Corinthians 5:1).

If there is a parallel to be drawn with today’s church, if Paul were here and taking aim at the practices of the church, he would not be gunning at cohabiting couples, he’d be gunning at child sexual abuse and #churchtoo. Therefore, if Methodists — evangelical or otherwise — want to show that their priorities are in the right order, then they should take care not to lump all forms of extra-marital sex in the same bucket of ‘sexual immorality’.

Fortunately God In Love Unites Us is far more focussed on positive relating to fall into this trap, but the MET article in Premier Christianity uses heavy language to describe the report — unduly heavy, in my view. It describes changes to the church’s view on marriage as ‘dangerous’ but the reason given is not the relational complexities that might arise, but rather ‘sexual immorality.’

And you know what’s really funny when we look at the Bible verses this article cites in its last section? The immoral practices in 1 Corinthians 6:9-11 are those to do with:

It’s almost like Paul’s sexual ethics are straight out of Leviticus and Deuteronomy, but — at the risk of repeating myself — they’re not the same as prohibiting all forms of extra-marital sex.

Now I appreciate that the purpose of God In Love Unites Us isn’t to end abuse or define sexual immorality; rather it is to carve out a space for Methodists to celebrate sexual relationships that are honouring to God. In that discussion, the debate is not about what is merely ‘not sexually immoral’; it’s about what the church wants to welcome. By that count, the door is still open for MET’s case regarding marital monogamy and single celibacy.

But so also is the door open for the case put forward in God In Love Unites Us:

MET might genuinely believe that the above is ‘not God’s ideal’ and I hope that Methodists will bear the cost of being gracious to each other, recognising (as the report points out) that it’s not easy to hold a minority opinion [p120].

But in the coming months, as this report goes out to consultation and comes back for another vote in 2020, I ask MET not to equate the report as endorsing sexual immorality. Not only is this unsupportable from the Bible, but it also harms the church’s Christian witness in our current times.

For myself, there is so much more that I could say, and part of me feels like this report — even if it gets through in 2020 — is still only a small step. But, I believe it’s a step in the right direction and I pray it will open the door for many people to feel welcomed within the church and come to know Christ.

May we see God, in love, uniting us.

Extract from God In Love Unites Us:

We would urge the Methodist Church likewise to recognise the lived realities of the way relationships are practised today. A failure to do so may ultimately be regarded as hypocrisy, if it simply ignores how its members and adherents are actually leading their lives. In our mission and ministry as a Church, we need to be able to engage in conversations about these matters in a discerning and pastorally sensitive way, which draws in other resources when the conversation exceeds our skills or our competence. [p89]

Consequently, we believe that, in awe and humility, the Methodist Church needs to recognise that it is being called by God to take the next steps in the development of its understanding of relationships and marriage. [p111]

[2] I told you Deuteronomy 22:13-30 is about ‘honour’-violence, so is Deuteronomy 21:18-21 — though the latter applies to rebellious sons. Though, bear in mind, in the whole of the Bible only one man is accused of bringing such family dishonour and disruption to social order: Jesus (Luke 7:34).

5 thoughts on “Why do Methodist evangelicals insist that all sex outside marriage is ‘sexual immorality’? Because it’s not in the Bible.”