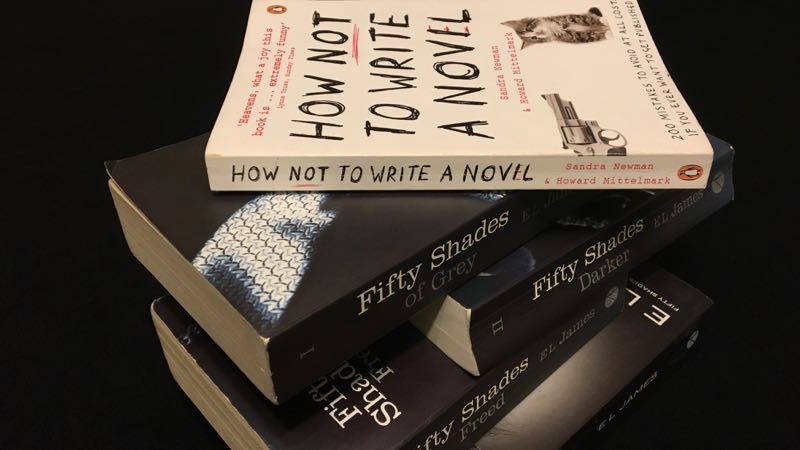 So, a fellow Fifty Shades critic and consent enthusiast recently gave me a copy of How Not to Write A Novel by Sandra Newman and Howard Mittelmark. It outlines “200 mistakes to avoid at all costs if you ever want to get published”. And as I read it, I couldn’t help but wonder whether EL James might not have produced the crime against literature that is the Fifty Shades trilogy if she had read it.

She clocks up about 50 of these mistakes. Yes, 50. So, to mark the occasion of the third and final film  being released in cinemas, I figured it might be worth blogging about it again.

Also, credit where it’s due, the names given to the writing mistakes and the explanations are extracts from How Not To Write A Novel. And occasionally they use some colourful language.

All in all, I hope you enjoy, but read at your own risk.

Actually, of all the major mistakes listed in this section of How Not To Write A Novel, I didn’t find any that I could throw at Fifty Shades. The world is established and we move quickly into the action. Even jealous book-hater Jenny Trout found the beginning compelling when she starting reading the trilogy.

This section opens up with some plot basics on the number of thread counts. Various mistakes people can make are:

Here there is only one plot line, and the only thing your characters do is follow it. … The only real people in it are your two main characters, who do not interact in any significant way with anybody but each other.

Seriously, the entire plot is Ana and Christian. Ana goes to visit her mum for a chance to think about her rapidly developing relationship and guess who shows up uninvited? Christian. And Ana’s mum is all too happy to let him spend time with Ana even though Ana came to see her mother. This is but one example amongst many. There is virtually no character development outside of Ana and Christian and it shows, particularly in the first book.

Here a single character goes through life without having any meaningful interaction with anyone else in the world. … Into this category go all stories about sad singles who spend scene after scene thinking about the mess in their apartment, their flabby body, the distorted faces of the hostile strangers who surround them, their unhappy childhood, the last job they lost, and their habit of onanism.

Some authors cannot bear suspense. As soon as the protagonist has a problem, the author rushes in officiously to solve it.

This is an apt description of the plot-lets of Fifty Shades Darker. Conflict arises, conflict is resolved. And repeat. Twelve times. Das Sporking kindly listed all the little plotlets in their summing up of FSD.

A good approach is to allow one dream per novel. Then, in the final revision, go back and get rid of that, too.

Ana has dreams about Christian dominating her. Christian has dreams about his abusive childhood. None of these dreams serve any plot purpose. Instead, their cringe-worthy symbolism is designed to move readers to mixtures of horror and sympathy. For myself, they just made me want to move my eyes away from the page.

The Second Argument in the Laundromat – a scene which occurs twice

NEVER use two scenes to establish the same thing.

It seems EL James cottoned on to the fact she was doing this because Ana complains in Fifty Shades Darker that she and Christian keep having the same argument over and over again.

Meanwhile, if you exchange “in the Laundromat” for “left unresolved because Christian wants sex with Ana and decides he will have sex with Ana” then you pretty much have the plot of Fifty Shades.

But a Meteor Could Land There, Right? – In which the author cheats

This particular blunder is known as deus ex machina,, which is French for “Are you f***ing kidding me?”

So, Christian is a control freak throughout the entire trilogy – except for the moment when it’s convenient for the plot. Christian’s sister has been kidnapped, Ana is being blackmailed and she goes to the bank to withdraw millions of dollars to save the day. The bank calls Christian for authorisation of the transfer; Ana pretends that she’s leaving Christian. And Christian believes her and lets her go. Nowhere, nowhere, nowhere, anywhere in the plot is Christian willing to let Ana go except in this moment.

And then, when the day has been saved, Christian reverts to his controlling mode saying he’ll spank Ana if she’s reckless again and that when she gives birth to their child, it has to be via C-section. What a guy.

Christian doesn’t change. There is no god in this sex machine, just terrible, terrible writing.

Goodbye, Cruel Reader! – Where an inconvenient character is conveniently disposed of

The primary sin here is lousy plotting. Seeing no way of getting the protagonist out of a thorny plot problem she has created, the author decides to kill whomever stands in his way.

We have plenty of inconvenient characters in Fifty Shades:

How are all these inconvenient characters with their issues dealt with? Terribly conveniently, that’s how!

Mrs Lincoln is disavowed by Christian’s adopted mother without a shred of proof that Christian’s story is true. This happens at the same time as Christian realises that his relationship with Mrs Lincoln was, actually, abusive. For the record, abuse survivors tend to be disbelieved when they first share their stories, especially when they’re telling their story to people who already know the abuser. Also, for the record, once someone realises a relationship was abusive, they usually delay disclosure because of a sense of shame. In Fifty Shades world, none of that applies.

Leila is sent into a mental institution (for her own good, we are told) and later provided for by Christian’s money (we are told).

Jack Hyde is fired from his position because Christian took over Ana’s workplace, courtesy of Christian’s money.

And Mr Lincoln is bankrupted because of Christian’s money.

Although these are all one type of writing blunder, I’m counting it as four.

Unless you are writing a sex-and-shopping novel, there is no need to give a complete inventory of someone’s outfit.

I don’t care if Fifty Shades is a sex-and-shopping novel (which it is, despite its claims to deeper meaning), the plum coloured dress Ana borrows from her flatmate makes way too many appearances.

[Honestly: my husband raised this point so I flicked open FSOG to see if a reference would be that hard to find. What do you know? Within 10 seconds my eyes were on page 375 and there it is – ready for Ana to wear with her “clean bra and panties” as she goes to interview for a job.]

Getting to know your hero

Generally, unpublished authors are far more intrigued by their characters’ backstory than their readers are.

This one is so painfully obvious, I’m not even going to explain it.

What a guy! Christian Grey funds Ana’s university, wants to end world poverty and supports expensive luxury galas to raise money for drug rehab program for parents and their children.

But no, none of this removes the fact that Christian throws money around like there’s no tomorrow. He says he’d build the Palace of Versailles just to see the colour of its light on Ana’s hair because that’s what “we despots” do. EL James wants us to believe that all of this is somehow made OK by his charity work?

Sidekicks and Significant Others

The Cheerleader – Wherein a sidekick exists solely to admire the hero

The author knows what kind of person she wants the character to be, but she is not doing the work to get the reader from here to there.

Actually, if you watch the film of Fifty Shades Darker, this scene could be straight out of a ghost story.

Men Are from Cliché; Women Are from Stereotype – Wherein the characters are built solely of broad gender stereotypes

She is always saying “Let’s talk” – the most dreadful words a man can hear! He’d rather be watching the game, and that is his sole personality.

Replace “watching the game” with “having sex” and you have Ana and Christian right there.

Maybe I’m being unfair; Ana has legitimate reasons to want to talk to Christian given his catalogue of non-consensual behaviours towards her. Still, Christian is an Alpha Male on Alpha Male steroids whose masculinity is definitely not gay!

This is the ethnic character who … typically has no qualities apart from an ethnic identity.

So, I was talking to my husband about whether José would fit this category of writing error. And he was like, “No. José isn’t inserted into the plot as a token person of colour. He’s inserted into the plot because he’s based on Jacob Black’s character in Twilight, and Jacob is a native American from the Quileute tribe. Therefore, to retain his ‘exotic otherness’ but move away from plagiarising Twilight, he’s been cast as Hispanic.”

Is it me, or is this more offensive than an author writing in a token person of colour?

Even if EL James’ writing doesn’t fit the error described in How Not To Write A Novel, this one still counts.

These villains unselfishly dedicate all their free time to plotting Mother Teresa’s downfall, without any cash incentive or reason to hate Mother Teresa other than “her phony nice act makes me see red.”

End of part 1. Mistakes counted: 14 + 3 bonus = 17. In the next part I’ll look at words and phrases, sentences and paragraphs, dialogue and narrative stance.

Do you want to write better fiction than EL James? Did you like the titles of the writing mistakes and the insights given about them? Maybe How Not To Write A Novel is for you.

If you’re after more Fifty Shades humour, you might enjoy this short piece of mine: 50 Shades of Parody: Monsieur Gaston will see you now