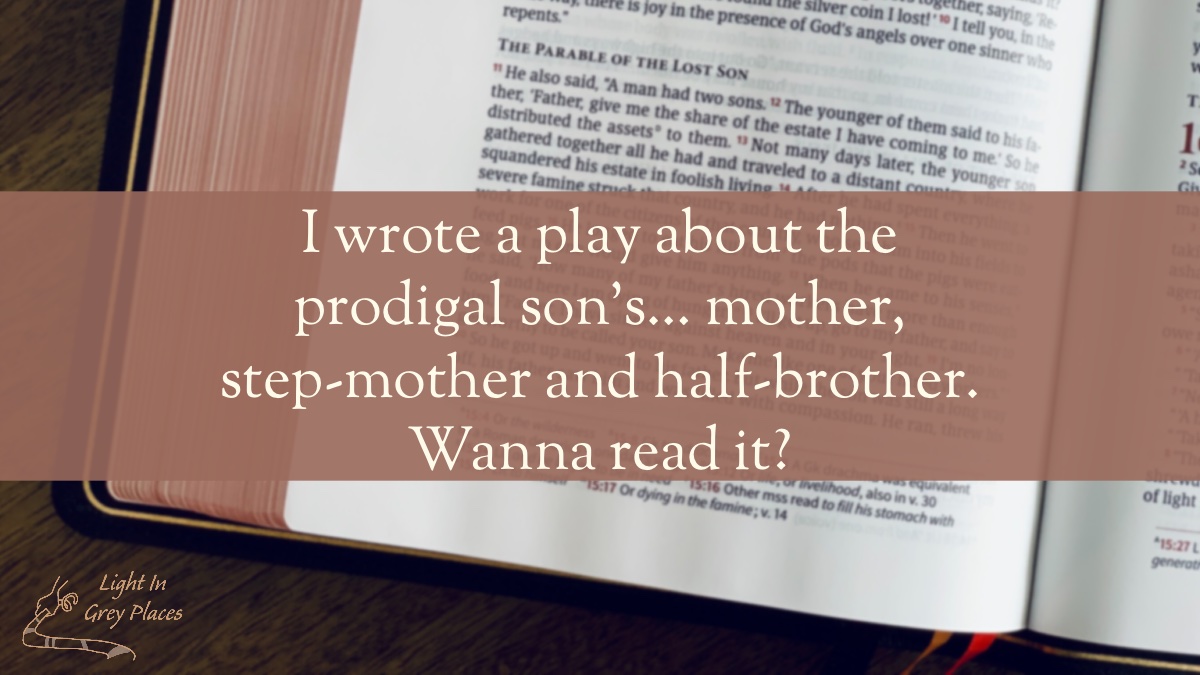 People have asked about the prodigal son’s mother, but I’ve never heard anyone ask what Jesus’s parable would look like if the two sons had different mothers. But that’s what I’ve done in this play.

I believe Jesus told this parable to deliberately target honour violence. Compare it, for example, with Deuteronomy 21:18–21, the law of the “stubborn and rebellious son.” It has a very different ending.

What’s more, if you look it up, you’ll see that just before that law there’s another one about a father dividing his property between two sons. Except in Deuteronomy 21:15–17, the sons have different mothers.

That was my hook. And it puts a whole new light on the older son’s words at the end of the parable:

“Look here!” he said to his father, “I’ve been slaving for you all these years! I’ve never disobeyed a single commandment of yours. And you never even gave me a young goat so I could have a party with my friends.”

The play is titled Two Wives and Two Sons. It alludes to the stories of Sarah, Hagar, Rachel, Leah and Bilhah, as well as other parables that Jesus told—but the play is its own story and has its own ending.

If you would like to read it, please get in touch.

Two Wives and Two Sons is the story of a wealthy polygamous family in the Ancient Near East where pride, greed and resentment give way to humility, forgiveness and compersion.*

(* Urban dictionary: A feeling of joy when a loved one invests in and takes pleasure from another romantic or sexual relationship.)

The play is an expanded version of Jesus’s parable of the prodigal son. It tells the same events in the context of the culture of the Ancient Near East, however the two sons have different mothers. The older son’s mother is a slave, but the younger son’s mother is a free-born woman.

Two-act drama that includes one song.

Two Wives and Two Sons is oriented around female perspectives, borrowing heavily from the norms of the Ancient Near East, including polygamy and natalism.

It has the even-tempered, conversation-driven style of Disobedience, and the compassion and feel-good ending of Monsoon Wedding (though it’s not a comedy). Like both these stories, the play says much about overcoming pride and removing stigma and shame.

Blessing, Jade and Duty are all singing parts.

I look forward to hearing from you!

Photo by Tim Wildsmith on Unsplash