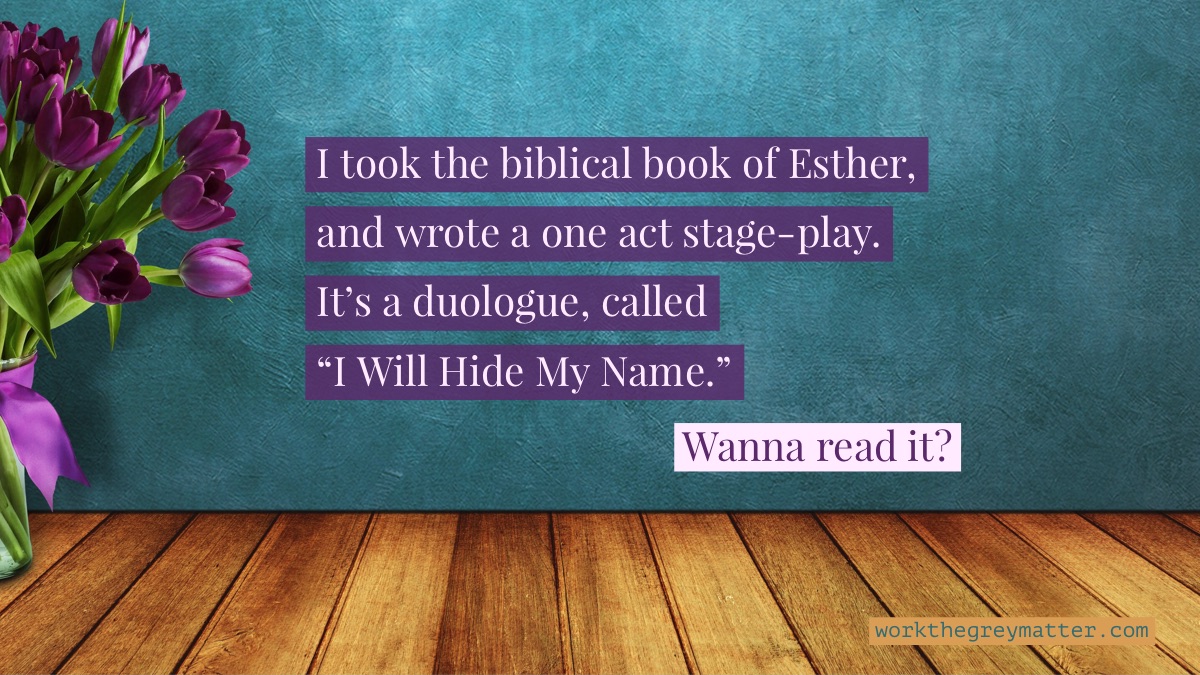 I’m not sure who exactly out there might be looking for a theatre play about the book of Esther, but if you are and you’re reading this, please do get in touch in with me. Because I’ve written one and I’d love for it to be performed. It’s titled: I Will Hide My Name.

For people who don’t know the book of Esther: Haman, the highest official in Ancient Persia, interviews a Jewish prisoner, who appeals to him to spare her life and that of her people. But why is this prisoner wearing the robes of royalty? And does Haman even realise?

For people who already know the book of Esther: Before approaching the king, Esther appeals Haman to revoke his decree to annihilate her people. He scorns her petitions for peace and only too late does he realise she’s the queen.

Oriented around a female perspective and biblically grounded, I would describe it as a cross between JB Priestley’s An Inspector Calls and Abby Guinness’s The Word of the Wives.

One female, two male, however only one of the male roles is a speaking part.

The female character sits throughout, except briefly at the end (that said, alternative staging variations would not require her to stand).

I Will Hide My Name is based on the events recorded in the biblical book of Esther but also diverges from it. Those familiar with the story will know that Esther never actually appealed to Haman; instead, she leveraged her status as queen to appeal directly to the Persian king and save her people from destruction.

However, the play’s divergent premise allows for an exploration of the many hidden themes of the biblical book: the backstory that links Haman and Esther, Esther’s redemption of the house of Saul, and the parallels with the Exodus/Passover narrative of deliverance. Whilst these themes are widely understood in Jewish scholarship, they are less well known amongst Christians.

This play and the biblical book it is based on are set during the height of the Persian Empire, between 485 and 440 BCE, during the reign of Xerxes I. At this time, the empire stretched from Ethiopia (Cush) to India.

One could describe the book of Esther as both a comedy and a political thriller. It tells of how Haman, the king’s chief advisor, seeks to annihilate the Jewish people, in vengeance for one man’s slight. However, Haman does not know that the queen, Esther, is herself a Jew, having been conscripted into the harem after the king dismissed his former queen. To save her people, Esther risks her life by entering the king’s presence unsummoned, and petitions for the lives of her people. After a number of twists, the king spares Esther and her people, and has Haman hanged. The Jews are then given permission to take vengeance on those who would have killed them and they establish a festival, Purim, to commemorate their victory.

The book of Esther is known for having many ‘hidden’ elements; its subtext assumes knowledge of political and religious events and people, but does not name these. So, for example, it doesn’t include any of the following words: God, prayer, temple, Passover, sin, judgement.

I had the idea for this play after reading Esther In Ancient Jewish Thought by Aaron Koller (2014: Cambridge University Press) and you can read my review of his book here. Koller argues that Esther is principally a political work from the late 4th century BCE regarding Jewish identity and that its author asserted that Jews who weren’t living in Jerusalem or exhibiting certain cultural markers, were still Jews.

The duologue explores this theme along with other ‘hidden’ aspects of the biblical book: the backstory that links Haman and Esther, Esther’s redemption of the house of Saul, and the parallels with the Exodus/Passover narrative of deliverance.

Whilst I have endeavoured to be reverent towards the book of Esther as a sacred text and respectful of Jewish traditions, I must acknowledge that I have written principally as a Christian, for Christians, aiming to improve Christian understanding of the biblical book. Whilst Christian audiences are likely to be familiar with events and ultimate conclusion of the biblical account, they may nevertheless experience the play as educational of the book’s Jewish cultural context and as an intriguing twist on an old story.

That said, the play does not assume knowledge of the biblical book and I hope it will hold wide appeal in its exploration of vengeance, greed, power, sex, politics, courage, inclusion, kindness, faith and hope.

I look forward to hearing from you.