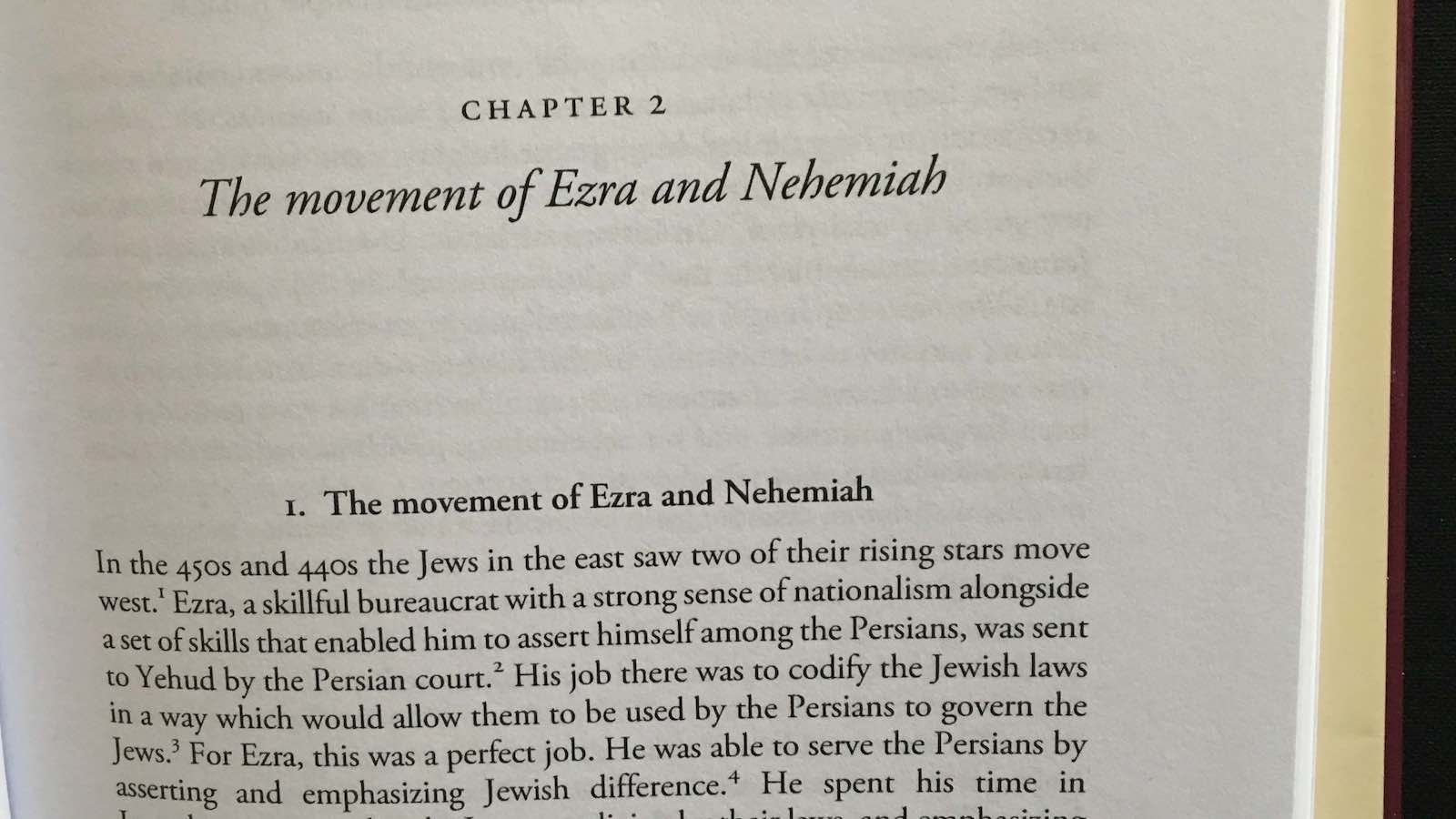 Nehemiah. The next DVD and discussion series held my Bible study group will be on… Nehemiah.

After reading a truly excellent book on Esther last year (from which the picture below is taken), I’ve been distinctly uncomfortable about Nehemiah. Or perhaps, it’s not that I feel uncomfortable about the book itself. Rather, it’s the fact that I have only ever heard Nehemiah preached about in positive terms.

If you’re unfamiliar with the story, Nehemiah is known for rebuilding the ruined walls of Jerusalem.

To put this broadly into the biblical timeline: it’s about 440 years before Jesus, which is after the exile and after when the Jews were allowed by the Persian king to return to Jerusalem if they wanted to. The second temple had been standing for 80 years already.

But Nehemiah also used his position to break up families and kick out the one of the most vulnerable people groups from Judah and Jerusalem: foreign wives. There is something about Nehemiah’s actions that my intuition says is acutely misogynistic and racist.

Now, his motivation was largely inspired by remembering that it was King Solomon’s wives (all 700 of them, not counting the concubines) that led him and the kingdom astray, and caused the exile. And the exile was very, very bad. More importantly though, the Jewish cultural identity was at risk of being wiped out altogether. Nehemiah and his people defined themselves by their language, their worship, their land and their lineage (amongst other things). All of these things were under threat and he took drastic action to build walls of separation – both physical and social – to preserve the remnant that remained.

Now, understanding this doesn’t mean I’m suddenly all happy and comfortable with this narrative, but it does help me get my head round it. When Nehemiah and his people are framed as the oppressed minority desperately fighting for their cultural identity, his actions don’t feel exploitative or presumptuous – even if they do feel extreme. It’s interesting to note that native Americans and aboriginal Australians have been known to identify with Nehemiah’s tactics.[1]

But – and this is my real point here – I have never heard these contentious aspects of Nehemiah’s ministry discussed in the church.

So when I heard that my Bible study group was going to do Nehemiah – I felt uncomfortable. Would the discussion guide sanitise the story? Would we be encouraged to come up with crass spiritualisations – saying that although Jew/Gentile differences didn’t matter any more, holy/sinful differences do? Because, “Oh yes, we’re holy, but XYZ group of people belong firmly in the ‘sinful’ bucket!”

I don’t think I’m being far-fetched in saying this. The previous time I met with this study group, I told them about my reaction to the Orlando shooting last month. I didn’t actually say whether I supported gay marriage or not. Even so, what I did say (which was pretty much the same as what I wrote in a blog post here) made some people there feel very uncomfortable. So when I heard that we would study Nehemiah, I was concerned that it would foster ‘us-and-them’ feelings.

And then as the first session started, I saw who made the DVD.

It was The Gospel Coalition.

The logo said it was a ‘women’s initiative’ and the idea that this series was going to be targeted in some way at women left me even more uncomfortable. Apparently there’s a woman who will be leading parts of it, but it was Don Carson who began to introduce the historical context in which Nehemiah was set.

And then the DVD stopped working.

I was grateful for some mental space where I could begin to contemplate just what this series was going to mean for my study group.

The man who led the session is someone who I have a lot of respect for. Very thoughtfully, he took us through the covenants God made with Abraham, Moses and David – and the warnings that if the Israelites disobeyed, then there would be (bad) consequences. He also explained how Isaiah prophesied that Cyrus would allow the Jews to return to Jerusalem. Together the group touched on issues of identity and God’s sovereignty.

Near the end of the session, the man who was leading asked what people wanted from the group. I didn’t say anything at the time, but afterwards I spoke with him in private.

I said I was concerned that the series might try and sanitise Nehemiah’s career. I said it could be a real opportunity to get people talking about dividing lines and how we understand God’s sovereignty. But… it would be really important that space was allowed in the sessions for people to raise questions and disagree.

And he listened. To my surprise (and relief?), he expressed how he had some concerns at how Nehemiah pulled the hair out of men’s beards near the end of the book. He also emphatically said that Christians need to understand the whole book in light of Jesus’ ministry.

I then mentioned that if The Gospel Coalition made the DVD, I would bet good money that – left to itself – it would encourage people to separate themselves under a misguided sense of holiness.

He hadn’t heard of The Gospel Coalition before (I hadn’t a year ago either), so I explained that they are very strong in their complementarian theology that men should lead and women submit. I also said the leaders of The Gospel Coalition haven’t called out abuse when they should have done (see Nate Sparks’ post here). And that John Piper makes his own romanticism out of self-denial (my own conclusion – the post is still in progress).

Then he asked me what I thought would help as the group went through the series.

I answered that I felt the group needed to have some acknowledgement that although Nehemiah was building walls, sometimes it is right to tear down walls. We shouldn’t naively discuss Nehemiah’s ministry without also asking questions over the meanings of walls like the one that stood in Berlin, or the one that stands in Gaza, or the one that some in the US want on its border with Mexico.

I also said there needs to be acknowledgement that God’s sovereignty is complex. Even though the narrative of Nehemiah shows it in one way, other perspectives are needed in order for there to be balance. We shouldn’t be blind to the fact that one of the purposes of the book of Esther (written after Nehemiah, even though it is set before) was to challenge the idea that political will was always in accordance with God’s will.

And he heard me.

So… I honestly have no idea where this Bible study is going to go. I don’t know what it will mean for my group. I think we are a mix of very different perspectives – perhaps more so than is often appreciated.

And I’m left thinking: will The Gospel Coalition ‘explain away’ the actions Nehemiah, even though his actions were highly contentious – even at the time?

But I’m willing to believe that God will have his hand in what comes in the following months and I pray that I – and others – will act in a way that is transformative for the group.

Did I have any concept that this would happen when I studied Esther last year? No. But maybe I shouldn’t be surprised.

And if you didn’t know that Esther was written as a political response to Ezra and Nehemiah (and then some!), you might want to read my blog post on it.