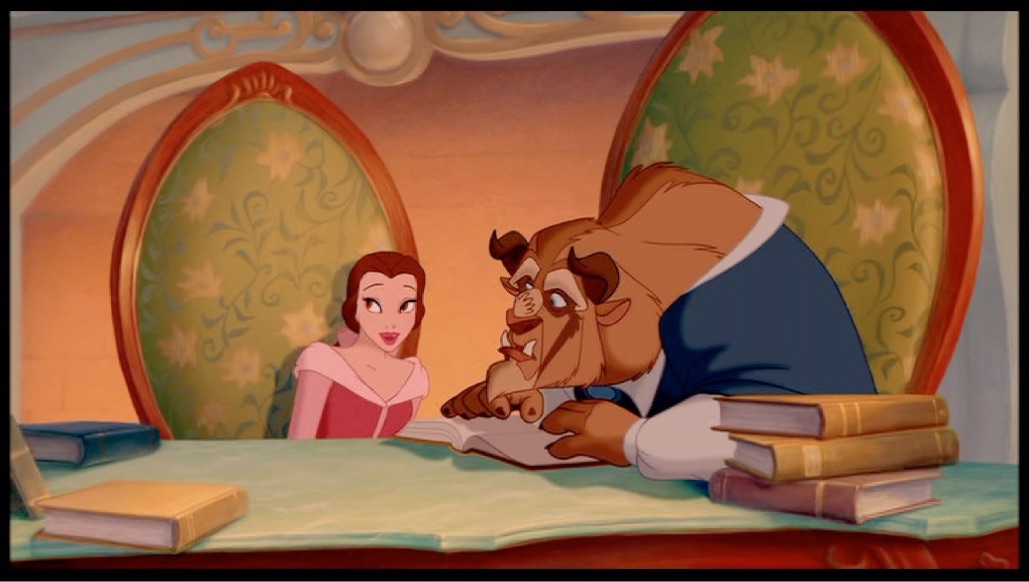 It was incredible to me that part of the Beast’s backstory is literally oppressing an entire town and his “redemption” is simply letting Belle go and not kill Gaston. Sigh. Belle became an externalized moral icon for him instead of him showing a pattern of repentance and personal growth.

When a friend comments on your Facebook feed and hits the nail on the head, there’s little more to add.

We don’t become good people by having good people in our lives, or by buying their books, or by putting their pictures on our wall. Rather, we do it by following their examples through our actions.

The 1991 Beauty and the Beast understood this. But I don’t think either the 2017 version or Fifty Shades did.

Consider this your SPOILERS warning: I will be talking about plot details of the live action Beauty and the Beast.

What happens in Fifty Shades?

The phrase “Christian Grey’s journey of transformation” is a bit of an oxymoron. He holds on to his sense of self-righteous entitlement throughout the entire trilogy, masking it as concern for Ana’s wellbeing.

In fairness to him, Ana is meant to be his example of morality – and she fails pretty spectacularly. But then, Ana’s characterisation was flat to begin with; her virtue is almost entirely bound up in her virginity and sexuality. Though she does every now and then try and speak some sense into Christian, she is far more gifted at making excuses for him and exploding with orgasms at his touch.

Honestly, I can’t think of a single good example where Ana shows Christian good behaviour and he demonstrates learning by copying her. I mean, the closest we come to is Ana using her safeword on him and him then thinking maybe he shouldn’t use sex to punish her.

But Christian never actually learns to do good himself.

He does express some remorse at how he hurt Ana at the end of Fifty Shades of Grey (mingling it with victim-blaming), but he doesn’t actively learn new skills in doing good. All his ‘goodness’ is either him clinging to control or acting to defend his pride.

What happens in Beauty and the Beast?

In both versions, Beast steps out and does new things.

In the 1991 version, he purposefully chooses and gives a gift, he feeds the birds, he eats with dignity and he dances with Belle. Though these are simple acts, in each of them, he had to give up an element of control and allow Belle to teach him. Also, given that this is a fairy-tale, these acts are also symbolic of greater change.

In the 2017 version, he says Belle can have his library if she wants it, because he had a “very expensive education” but can’t really be bothered with Greek. He also learns not to make a mess at the table, but more importantly he agrees to read books with Belle. That’s when he ponders poetry and sees the beauty of the wintry landscape around him. As for dancing with Belle, he was already a very practised dancer having had his castle full of women on plenty of previous occasions. So the ballroom scene wasn’t exactly a learning experience.

The poetry moment is a good one, when he admits to Belle that it’s like he’s seeing his surroundings for the first time. But I’d say this is more him learning appreciation of a new experience than learning how to be a decent human being. The closest we get to him showing a change in morality or expression of regret, is when he apologises for calling Belle’s father a thief.

“What about when he lets Belle go?” I hear you ask.

Well, and this will be the topic of the next post, in short: he doesn’t. He lets Belle walk out of the castle grounds because he’s been able to convince himself that she will be with him even when she’s not with him. So no, that doesn’t count nearly as much as it should do. And as for showing mercy to Gaston… I discussed what was wrong with that in Part 3 of this series.

Christian relaxes and becomes a mildly more tolerant human being; he finds his voice and articulates the abuse he suffered when he was younger, shedding the shame he’d borne; he begins to explore experiences that before he’d been too fearful of. This is the arc of someone becoming more free and whole as a human being.

Similarly with Dan Stevens’ Beast, he explores poetry and appreciates the beauty around him like he’s seeing it for the first time; he also finds his voice and declares himself not to be a monster. Again, this is about him becoming free.

And that’s a valid story arc.

But it isn’t a story that can happen in isolation.

It has to intertwine with a story where the person acknowledges that they too have a need for forgiveness, that they too have hurt others. They also have a responsibility to learn what it is to do right, otherwise all they’re being handed is another platform for entitlement. Only this time, instead of basing their entitlement on their birthright, they base it on their experience of abuse.

I’m not saying that everyone is as bad as everyone else. I’d say that everyone has done wrong but I don’t believe all people have inflicted equal harm. It will be the case that some, probably many, people who need to become whole have given lesser and fewer hurts than those they’ve received.

But that isn’t the case for Christian or Dan Stevens’ Beast.

So it makes no sense that their repentance and growth in virtue is so watered down in their stories.

In the 1991 Beauty and the Beast, however, we repeatedly see Beast learning in different ways – to the point where he doesn’t need Belle to tell him what’s the right thing to do. He sees it for himself and not only that, he acts on it.

I find that a much more satisfying story.

This is part of a five part series looking at how Fifty Shades and both versions of Beauty and the Beast frame the following:

You can find an index for all posts here.