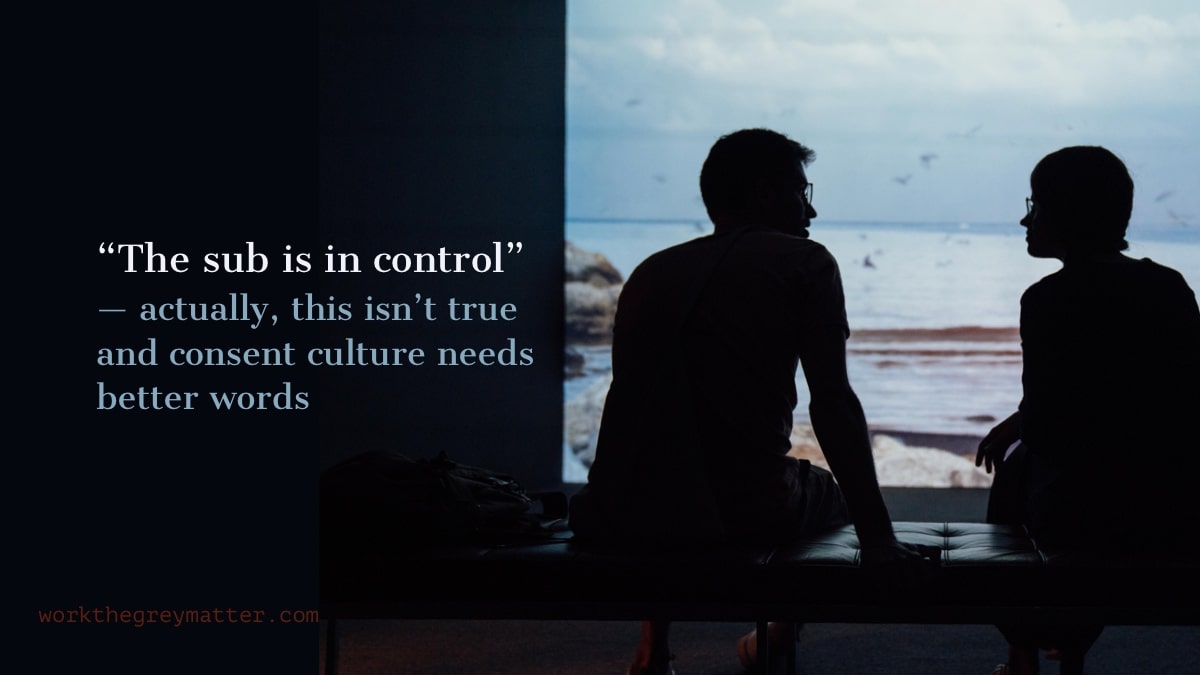 My husband has Asperger’s Syndrome and that can make things like going to the dentist very confuddling. So a few months ago, when he needed a filling, he said he wanted a responsible adult in the room with him. Me.

In the event, the dentist was extremely polite, clear and professional. She explained what she knew about the filling, what she would need to find out as she went along, and what she was going to do and why. She answered our questions and my husband agreed to go ahead.

And then, once he was in the chair and all numbed up, she gave him one last mild-mannered reassurance: “You’re in complete control.”

I want to talk about this.

No, not in complete control

In many ways, the dentist’s statement was absurd.

Although my husband was able to communicate, his physical ability to do so was impaired whilst the dentist was working on the filling. Also, he was in an emotionally heightened and nervous state and that impaired his mental ability to communicate. (Both of these are reasons why I was in the room.)

And not least, he had zero control over what the dentist was actually doing to his tooth. She had control over which tooth she worked on, how she drilled and how she cleaned it out. If she was doing it wrong, we wouldn’t have known. We had to take her at her word.

So why did she say my husband was in complete control?

Well, it wasn’t to pretend that none of the above was true. Rather, it was to tell my husband that, although she was the one in control, she would be fully responsive to anything he communicated.

In particular, she wanted him to know (and she did say this explicitly) that he could motion for her to stop at any time. Also, whilst his ability to communicate was impaired, it was not removed. If he had grunted or gurgled or raised his hand or whatever, that important piece of communication would have been heard, recognised and responded to. That’s what she wanted to assure him of — and rightly so.

Oh, wait, before I do that, I need to interrupt this post for a short political broadcast.

I love the NHS!

The dentist was a South-East Asian WOC and she was absolutely amazing; we in the UK are extremely privileged and should be very grateful that health professionals from overseas who, like her, are willing to work here.

Also, like most people in the UK, my husband and I don’t have private dental care or dental insurance because we’re on the NHS. (That’s the National Health Service; it’s paid for by national insurance contributions deducted as a percentage from our payslips.) The filling cost was subsidised by the NHS so we only had to fork out about £60 in total. It wasn’t a lot for what we were getting.

In short, the NHS is amazing and shouldn’t be privatised. Oh, and the decay in my husband’s tooth was deep but narrow, and the dentist got it all and my husband hasn’t had a problem since.

In consensual sex, people are vulnerable with each other. That’s part of why consent matters so much and there are loads of layers to the vulnerability — physical, emotional, mental, maybe even spiritual.

Going outside of this is not OK.

As such, you hear this phrase: the sub is in control.

There are no safe words, only safe people

There is nothing magical about the words “I consent to x” or “I do not consent to y” or “no” or “stop” that means another person is bound by those statements. No startled grunt or exclamation means another person has to listen or pause for continuous consent. You can pre-negotiate all you like, you can explain yourself perfectly clearly, you can set up safeguards and give gestures particular meanings — but none of that, absolutely none of it, can compel another person to honour the bounds of your consent.

When you’re vulnerable with someone, you’re not in control of what they do. They are.

Which means the only question that matters is whether they will be responsive to what you say and what you want.

Of course, that’s what the dentist really meant when she told my husband he was in ‘complete control’. She wasn’t trying to deceive him, and she definitely wasn’t trying to lay aside her agency or responsibility. If anything, my husband was relying on her toexercise her skill and decision making capacity. He wasn’t in control; rather, she was a dependable person.

Why it really matters that we move to better words

I haven’t said anything new here; I’ve just tried to articulate what a lot of consent-conscious people mean, but don’t necessarily say.

But, I think it would be good if people move away from this phrase.

Firstly, being savvy about consent is something that simply cannot be taken for granted. There are plenty of people whose stupidity seems to know no bounds, or whose naïveté is simply scary. I would know, I was one of them once. If we throw around phrases like “the sub is in control” it can create a false sense of security and encourage people to switch off their brains. This is not good for healthy, consensual sex.

At least, I sure hope it will.

So instead of dominants telling subs “You’re in control”, let’s have ones that say, “I will be alert to and completely responsive to your signals and communication. And don’t feel bad about throwing on the brakes at any time, even if you think I wouldn’t want to stop; because if you want me to stop, then I’d want to stop — for that reason if nothing else. Also, if you communicate something that I don’t understand, I’ll check in. And maybe that’ll break the mood for a few moments, but I’d much rather do that than violate your consent or cause you harm. Agreed?”