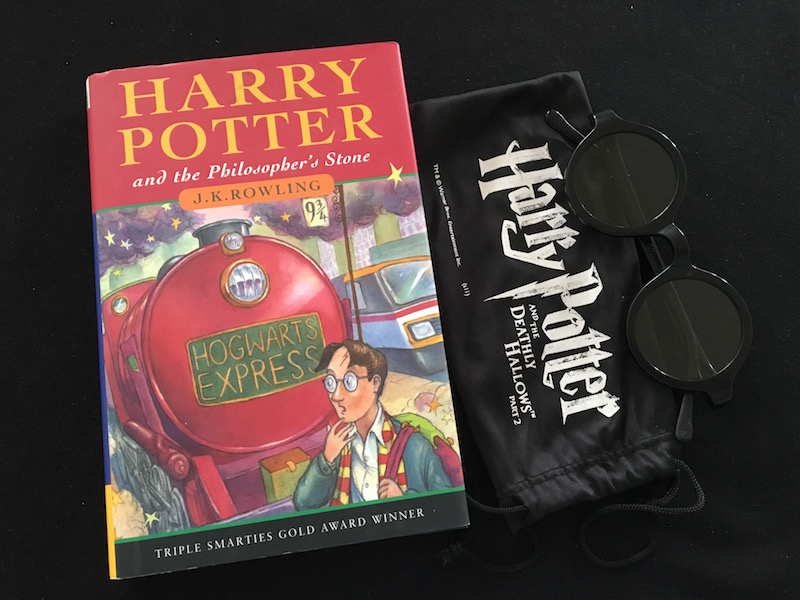 I started reading the books when I was on my gap year, living in Germany. I went to an English-speaking cinema to see Philosopher’s Stone and later borrowed Chamber of Secrets from a colleague. We had been drinking mulled wine in the winter market and I left around 9pm – giving the book back to her the next morning. Years later, another person I’d met there came to the UK with his kids; I took them to platform nine-and-three-quarters at King’s Cross station. My only regret is not snapping a picture of us next to the severed trolley that had been creatively placed against the wall. But no one can take away the memory.

It still baffles me why, in the cinema on the first night Harry Potter and the Deathly Hallows: Part 2, the person sitting next to me hadn’t read any of the books or seen any of the previous films. Each to their own. And though I hope that those who enjoy the films will go and read the books and enjoy reading as a leisure activity, I must say I am grateful for the films. Not only are they thoroughly re-watchable, they’ve also opened for me the talents of people like Nicholas Hooper and Alexandre Desplat – whose compositions I have unashamedly bought the sheet music for. (Hooper wrote the themes for Professor Umbridge and the Room of Requirement, as well as the song In Noctem, which features in one of the best deleted scenes in Harry Potter. Desplat wrote the music for Obliviate and Severus and Lily.)

I haven’t seen the Cursed Child yet, but I’ve heard nothing but good things. I hope to. Eventually…

3. You showed me varied characters

I was frustrated by Lockhart’s self-aggrandisement. I hated Umbridge’s cruelty. And I didn’t understand the Weasley twins’ mischief, because I’m a very different kind of person. But all of these characters were congruent and they show something about real people in real life, if one only takes the time to look. Meanwhile, you also took the time show characters we don’t (yet) see so often. On YouTube there’s an aptly titled essay about Newt Scamander’s “Fantastic Masculinity” and let’s not forget black actress Noma Dumezweni who plays Hermione in Harry Potter and the Cursed Child.

4. You offered powerful images of hope

The Patronus charm: calling on a protector and thinking a happy thought to fight despair. The Room of Requirement: a mysterious force that works quietly in the background to equip you, especially as you work for good. The Boggart-banishing Riddikulus charm: repelling fear by laughing in the face of the things that frighten you. These images speak powerfully into our reality. Vicky Beeching recently tweeted that making music out of her hate-mail was like the Riddikulus charm. She gets trolled for being a lesbian Christian. (There’s more on this story here.)

5. You crafted tools for us call out abusive behaviour

So, a friend was describing her relationship with her former boss: she said she was like Dobby and he was like Lucius Malfoy. Whenever he wanted her, she had to make herself available. And whatever task he wanted her to do, she had to do. And if she didn’t or couldn’t, she punished herself. (Thankfully, she doesn’t work with this guy any more.) Having these images to draw on helps us recognise and name the destructive behaviours around us – and choose to live differently. Draco Malfoy calling Hermione a mudblood is another major example.

6. You spoke – and speak – in a politically relevant language

My husband says Harry Potter is your way of saying:

Even if there was such a thing as a ‘master race’, the Nazis were still wrong.

I have never forgotten your tweet saying that there are Death Eaters among us; you say so much with so little. And you’re still at it. For myself, I remember being so struck by the religious hate speeches near the beginning of Fantastic Beasts and Where to Find Them. As I cringed, asking myself who in the crowd might be a witch or a wizard, afraid of their abilities, I remember thinking, ‘My goodness, that’s what it’s like to be LGBTQ+.’ You’ve given us a parable for our time.

7. You’ve challenged my own prejudices

I remember being so afraid of liking Harry Potter, because – goodness, there is no nice way to say this – I thought that books that teach us about right and wrong can only be written by Christians. Preferably conservative Christians. And nothing good can come of anything that remotely mentions the occult. Imagine my silent horror and sense of betrayal when I happened to cross paths with my church leader as she came back from seeing Chamber of Secrets at the cinema. “I think they’re brilliant,” she said, utterly unashamed. I squirmed inwardly: “But what if JK Rowling promotes something horrible by dressing it up as good?” Now, OK, I do believe that authors and artists can dress up harmful behaviours as good. I even started blogging in protest against one such trilogy. But I’m sorry that I judged the series and the scare-mongered about you in the earlier days. (And I’m not the only one who regrets judging people for reading it.)

8. You’ve reframed how I imagine success

Oh to be sure, give me half of your wit to tackle misogyny, a sliver of your generosity to tackle social inequality, and a modicum of your wisdom to work charitably – and I’ll count myself rich indeed. But even aside from how you speak publicly and your work with Lumos, you’ve fundamentally shifted how I aspire to write.

If you hadn’t already guessed, I’m one of those people who grew up with the books of C.S. Lewis – including The Chronicles of Narnia. Now, I think those books have much to commend them, but I also recognise your criticism:

There comes a point where Susan, who was the older girl, is lost to Narnia because she becomes interested in lipstick. She’s become irreligious basically because she found sex. I have a big problem with that.

It’s easy for me to say “I don’t think Lewis was trying to say that”, but the sad fact is that some of his most prominent fans today probably wouldn’t have a problem if he had been trying to say that. Also, it says something about his culture if his writing can come over as problematic, even toxic, to some of us today.

Now, I don’t mean to embark on a defence of C.S. Lewis or Narnia. Rather my point is this: whatever I write with will have its flaws. Now, all I aspire to do is to write something that’s good enough to make a positive difference. Maybe someone, some day, will look at it and say, “Well, I could do better.”

In which case, I hope that they do just that.

At the time I read the books, I was in agony to know what would happen next. I remember being emotionally wiped out when I got to the end of Order of the Phoenix because they all seemed to end with melancholy as Harry went back to live in Privet Drive. (And that’s not to mention who else had been harmed or even killed within each book.) But it was worth it. All of it. And I dare say, without the high cost, I would have had a lesser appreciation of the difference between choosing what is right and what is easy. The C.S. Lewis scholar, Dr Alister McGrath (who I do have time for) once said that Harry Potter is about the quest for virtue. I agree.

And I can’t thank you enough.