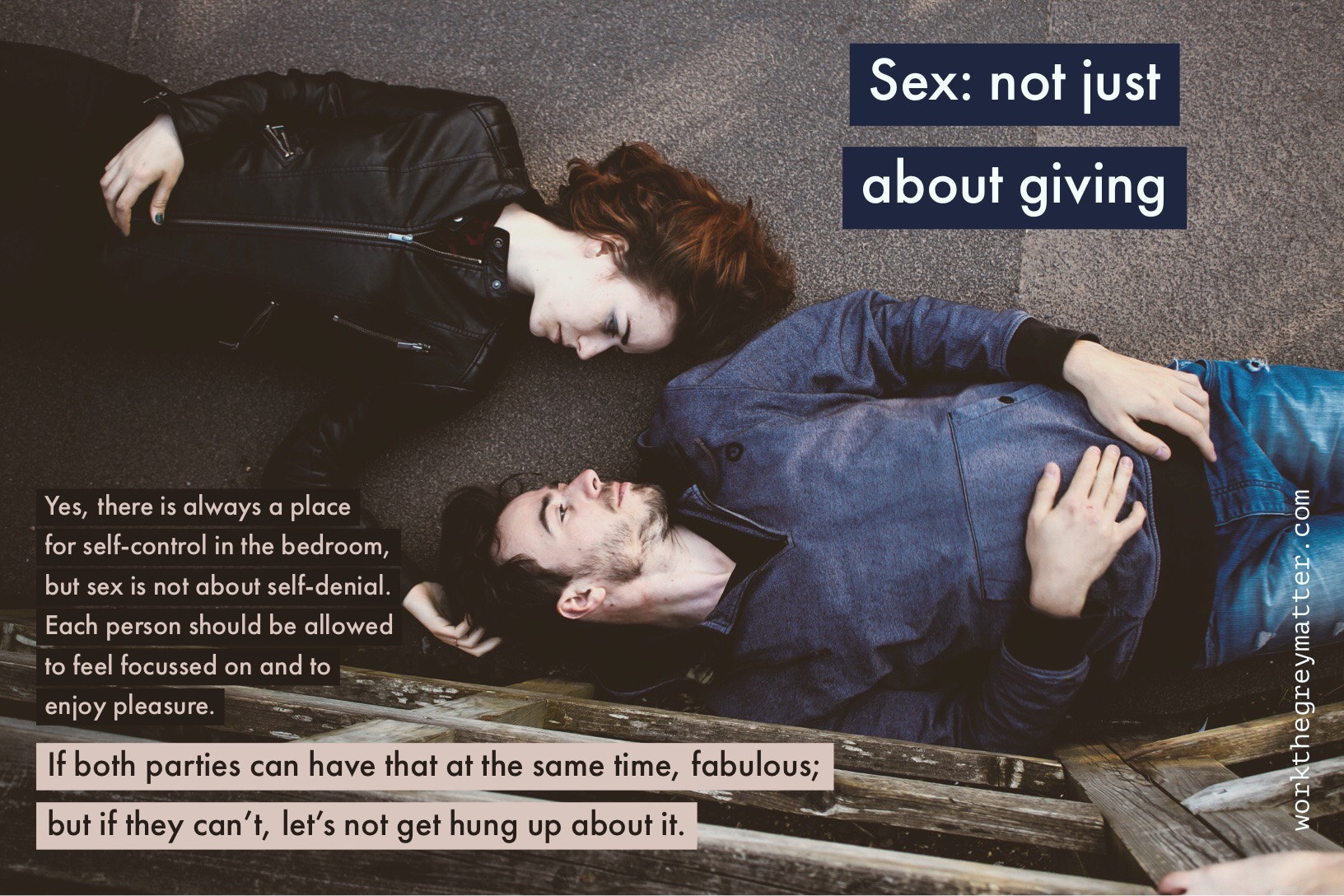 EDIT: this post is aimed at people who feel guilty about being pleasured. If you want to read about consent and negotiating for mutual enjoyment as part of a long-term sex relationship, I recommend this post on Ashley Easter’s blog.

The ‘always be giving’ myth

Every now and then I read something that suggests that if you’re not on the giving end of sex, you’re doing it wrong. The argument follows a few leaps of logic:

If you’re in a sexual relationship and you’re never or rarely at the giving end of sex (or not nearly as often as your intimate partner), then that points to an imbalance and imbalances raise questions about the overall health of the relationship.

To explain, I’ll need to tell you about some of my sexual history. Deep breath.

Story of my sex life

So, I was a virgin bride. My husband and I were very much in love and committed to each other, but for the first three years of our marriage, our sex life was largely pleasureless. Even when we had an enjoyable experience, I came away as if I had no memory of it. There was no joy of anticipation, only dread and weariness, conjured from the memories of failed encounters and the shame of counting the days – even weeks – between each sexual attempt. I was filled with uncertainty and confusion over my body, as it refused to make up its mind about what it liked but kept responding with pain and awkwardness.

Throughout this time there was definitely a problem in my lack of desire for sexual pleasure, but I think the bigger problem was that I was unable to receive it: I was indifferent to my husband’s touch.

So when things did change – with the help of professional psychosexual therapy, which we only had after I finally believed I wasn’t being whiney – receiving my husband’s affections was one of the things that I treasured very highly. (And still do, by the way.)

However, even as things in the bedroom improved, we still fumbled about each other’s bodies and only rarely were we able to contribute to the other’s pleasure at the same time.

And this is why I have such trouble with the notion that if you’re not giving or contributing during sex, you’re doing it wrong.

Sex is meant to be fun

The idea that you should always be giving sounds noble. After all, if you’re giving, then you’re “other-centered” and not “self-centered”; if you’re giving, you’re not focussing on pleasure itself, but on another person. These ideas are good as general principles for relationships and living, but if we apply them too seriously when it comes to sex, we’re missing the fact that sex is meant to be a form of play.

Yes, there is always a place for self-control in the bedroom, but the act of sex is not about self-denial. Each person needs to be allowed to feel focussed on and to enjoy pleasure, because that’s the point of the experience. And if both parties have get that at the same time, fabulous; but if they can’t, let’s not get hung up about it.

Having sex this way – where one person makes all or nearly of all the contribution for the other’s pleasure – does not mean you then have to view your sex life as an exchange of obligations. Sometimes people talk of “give and take” in a relationship and they use this phrase to try to promote balance between people. I’m all for that sentiment but this phrase makes it easier to see the relationship as a contract, which can encourage a feeling of entitlement, and that leads to… bad stuff.

It is good to receive

Each time my husband and I came to sex, we actively chose to see it as a gift given, not a payment made. I stopped counting how often I did things for my husband, and how often he did things for me, and how long it had been since each sexual encounter. There was no need, we each had abundant joy and we knew that if either of us asked, we would receive. (And we had already proven that even if one of us did go through a dry patch, they still loved the other and were loved by them.)

Yes, as a Christian, I believe it is better to give than to receive. The person who said that is undoubtedly the one person who I respect and trust most in my life. And to be sure, it is good to give freely in a sexual relationship. But instead of saying that a person must always be giving, or that they may only receive if they are giving at the same time, I say let a person receive. Why else are gifts given?

This post has been edited since it was initially published. For more posts on similar subjects see the Sex Worth Celebrating page.