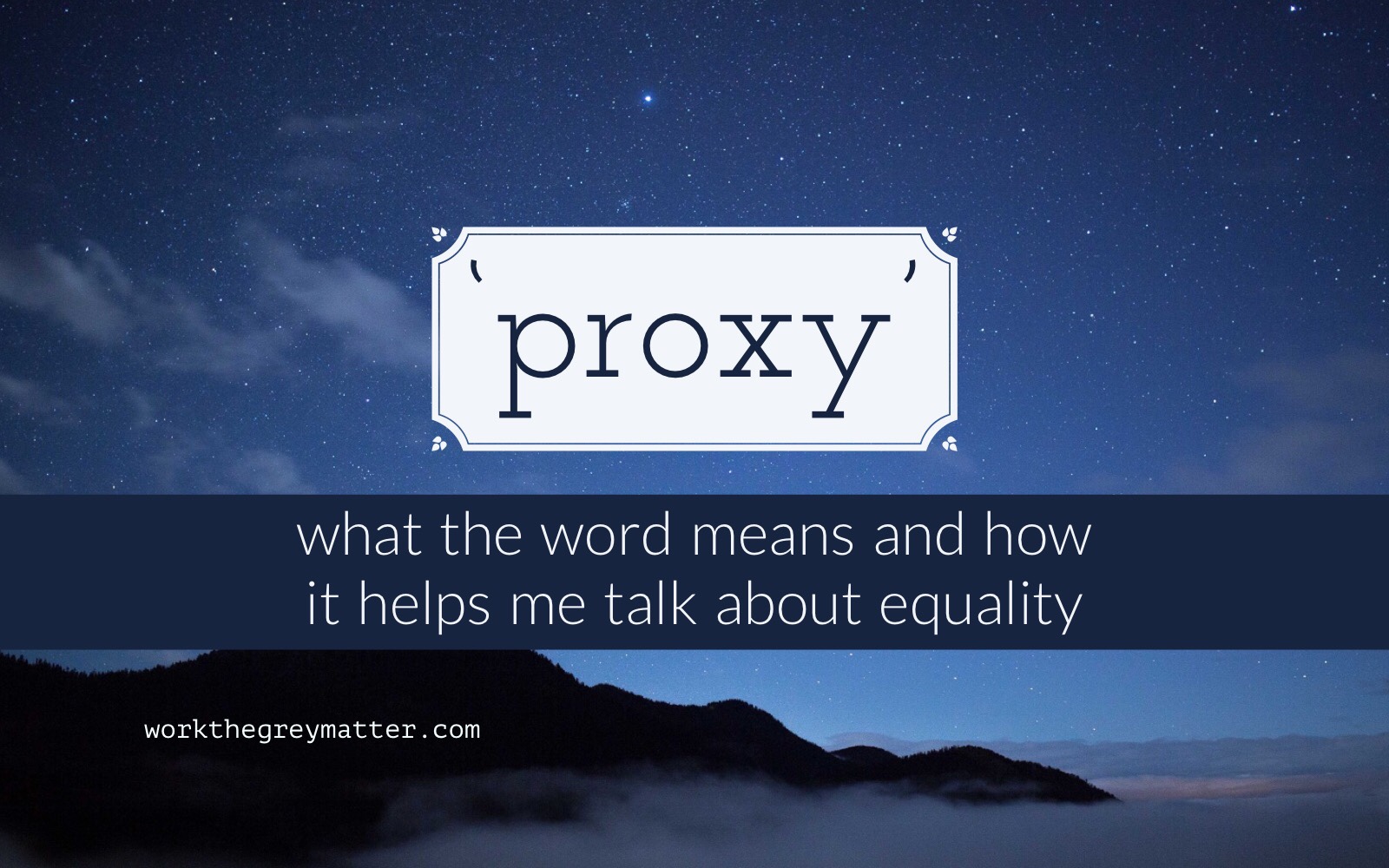 Over the last few years I’ve found that there are some words that I’ve started to use or think about more frequently. They’re little tools, like an adjustable wrench or an alum key, that I never much needed when I was growing up, but are now really handy. Probably because I’m more purposeful and aware when it comes to theological deconstruction and reconstruction.

‘Proxy’ is one of those words and it’s particularly helped me as I’ve thought about, and talked about, equality.

Where I first heard the word ‘proxy’

Growing up, my family used to play a Bible-oriented family board game called ‘People and Places in The Book’. The questions could be savagely difficult but the most memorable part was a square you might land on called ‘Proxy.’ When you landed here, you chose the question’s difficulty (1-6) and which player would answer the question. If that player got it right, you moved forward the number of spaces according to the difficulty. If they got it wrong, they moved backwards that number of spaces.

At the time I thought the word ‘proxy’ referred to the croquet-like viciousness of this square on the board – but it didn’t. It referred to the fact that the person answering the question was representing the person whose turn it was.

A proxy is a person who has the authority to represent another person. Hence, one of the ways you can vote in the UK is by proxy – authorising someone else to fill in your ballot paper on your behalf.

But there’s another sense in which the word gets used.

The meaning of ‘proxy’ in business language

a situation, process, or activity to which another situation, etc. is compared, especially in order to calculate how successful or unsuccessful it is

With the following example:

a proxy for sth Wall Street typically uses volume growth as a proxy for the underlying health of a business.

And it’s this meaning of proxy that I have found so enabling.

Taking the example above, the ‘underlying health’ of a business isn’t something that’s tangible. It’s not directly measurable either. We all have an understanding of bodily health, so we can all imagine that the concept of health might apply to a business. But it’s a nebulous concept whose meaning has to be framed by a business’ context and purpose. Even then, you still can’t measure it directly, you have to pick out relevant measures and weigh them up.

At least, not in isolation.

How ‘proxy’ helps me talk about equality

Equality is not tangible. And it’s not directly measurable either. And whereas we might be able to imagine the concept of equality, its meaning has to be framed by identity and relationship.

Now I’ve read enough to know that there are varying opinions about the differences between fairness, equality, equity and egalitarianism. I’m not about to try and gold-plate a perfect definition of equality.

What I want to highlight is how we use proxies to say whether or not something or someone is worth getting on board with.

The questions that really matter to us are things like:

And no, these are not easy questions to answer, because the concepts these questions drive at are inherently mysterious. So we use proxies to steer our overall assessments and judgements.

The proxies I hear talked about most often tend to be buzz words and red flags. What’s more, one person’s buzz-word (e.g. ‘biblically-based’) might be another person’s red flag.

The important things to know about proxies

Proxies make the immeasurable measurable, but proxies are inherently limited.

You can measure a perfect metre with a perfect metre-rule, but you couldn’t use metre-rules to perfectly measure the circumference of the earth. Why? Because a metre-rule is flat and the earth is round. Similarly, proxies are ‘flat’. They are tangential; they are approximations.

You can never make a complete judgement on account of a single proxy.

You can put precautions in place if you see a red flag in someone’s behaviour. You can evaluate that the risk presented by a person showing a red flag is too significant for the tolerance of a particular setting. But you can’t conclude about whether or not that person is dangerous from a single proxy. And even when you have multiple proxies – you still might not be able to conclude.

Which brings us to:

Some proxies are unreliable proxies.

Take sex, for example. One proxy is: inside marriage = ethical, outside marriage = unethical. This is an unhelpful proxy because, for example, it has no concepts of consent, play or maturity. It also ignores the possibility of bad marriages (e.g. forced marriage).

Part of the work of activism is to tease out when a proxy is unhelpful.

And it’s not helped by the fact that:

Proxies lurk within our worldviews and assumptions.

Proxies are part of our unconscious bias. Unless we contemplate why we reacted a certain way in a situation, and unless we talk about it with other people, we won’t understand our proxies or be able to evaluate if they’re helpful or not (or more helpful than not).

And ironing out misconceptions is important because:

We use proxies to judge the unobservable.

Proxies are outward, measurable, tangible, visible ways in which the inward, immeasurable, unseen things express themselves. Remember though, the immeasurable is always expressed through people and societies. That means you can’t interpret a proxy without looking at its relational context, just as you can’t interpret a business key performance measure, without looking at that business’ purpose.

Proxies are not the thing they measure.

Wisdom, faithfulness – these can’t be pinned down. They have to be lived and they have to live inside you. They can be demonstrated, but they can’t be proven. They can be shown and shared, but can’t necessarily be explained. And if I could guess at one of the greatest blockers to wisdom, it’s when people see a proxy but think they are seeing the thing it is a proxy for.

When people in support groups discuss what to make of a certain situation, they often ask questions to get more information. It’s because they know that the fact pattern is full of ‘indicators’; these might be pointing in different directions, or some might need to be given more weight than others. What’s significant though, is that if people are asking questions and weighing considerations, then it’s likely that they are already aware that the proxies they’re examining are merely indicators. When that’s the case, you don’t need to highlight the fact that people are using proxies or even say the word ‘proxy’. They know. And, importantly, they are using a collection of proxies to tease out the underlying nature of a matter.

In contrast, when people take one proxy and mistake it for something else, that’s when I find awareness of proxies powerful – because you can see through what’s happening much more quickly.

I recently blogged about a law in Deuteronomy 22 and I said, “In ancient Israel, a woman’s sexual activity was a proxy for social order.” What I meant by this is that if a woman was perceived as having sex in an unacceptable way, then she wasn’t seen as individually committing sexual immorality, she was seen as undermining the fabric of society. Whether we agree this was right or not, it changes how we understand the Old Testament law and challenges us to think about what proxies we use today.

Because there are plenty.

Lori Alexander (aka The Transformed Wife) points to women who have college debt and tattoos, and essentially argues these things constitute rebellion against God. She doesn’t talk about tattoos and debt and study as things that might indicate something else and should be weighed. Neither does she examine these indicators in their social and cultural context. Instead she equates the proxies with distrusting God and living in sin.

Similarly, you don’t need to look far in the US and UK churches to find people who say that the ‘clear biblical order’ is for men to lead and for women to submit to their leadership and authority (this idea is often called ‘complementarianism’). The idea of men’s leadership over women is treated as a proxy for social order. No wonder then that Christians who disagree have such a hard time deconstructing complementarian structures: we are seen as undermining the fabric of society itself.

Another example worth mentioning is when a high-flying somebody gets caught in a sex abuse scandal and makes some form of public admission or apology. Too often, the apology gets used as a proxy for repentance, reconciliation and safety, even when the apology is offered in isolation. People hear it and say the change is already there. No, it doesn’t work like that.

All in all, I don’t use the word ‘proxy’ often, but I find the concept of it fabulously helpful when I analyse what people say and how they say it.

Oh — and it’s also pretty handy to be aware of the proxies other people use if I want to get my point across. Because sometimes (not all the time, but sometimes) it’s more effective to bypass a proxy than to tackle it head on.

In his day, the astronomer and physicist Kepler knew that if he suggested the earth revolved around the sun, he’d be seen as undermining the church and blaspheming against God. So he didn’t. Instead, he said that his sun-centric formulas for planetary motion were merely a mathematical model that made calculating the positions of planets much, much simpler.

What about you? What proxies have you found helpful to be aware of? Are there proxies you used to use but which you don’t use any longer?