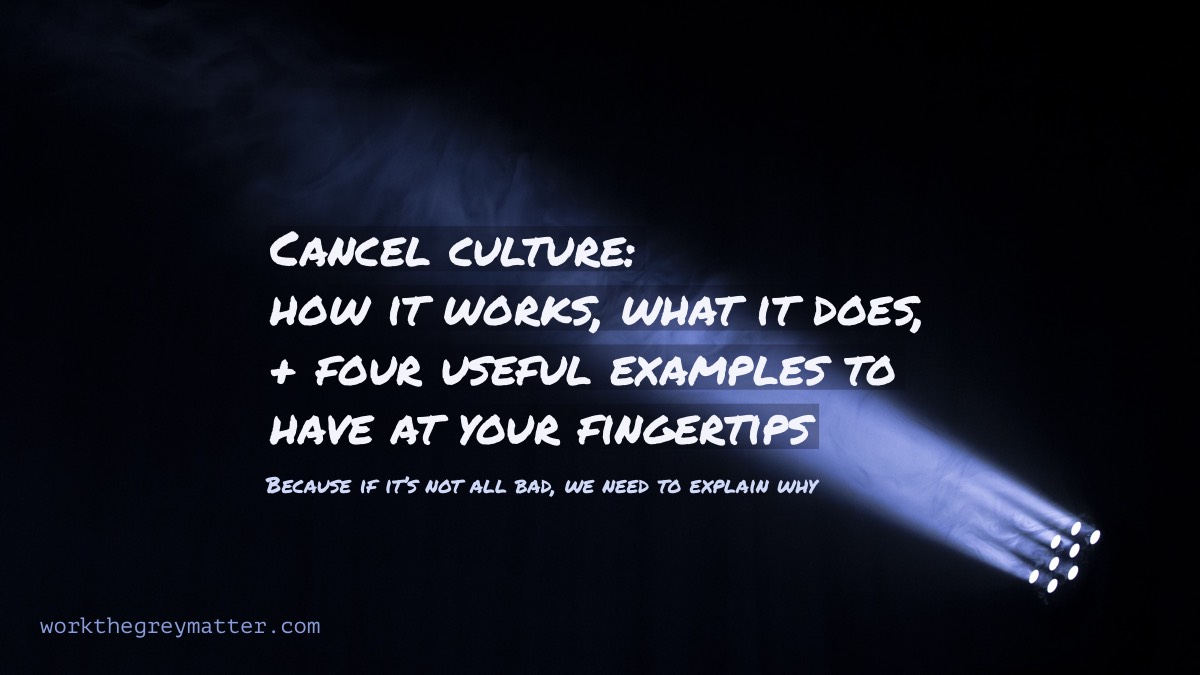 I’ve seen a number of stories recently about individuals and organisations standing up for what they believe is right.

Some left me with fuzzy warm feelings. Others not so much.

In their midst is much talk of “cancel culture,” though most uses have negative connotations of “intolerance”, “outrage culture” and “mob mentality.” And it makes me ask: when does cancel culture become bullying? Because withdrawing support for public figures isn’t always a bad thing.

To wrap our heads around this, I think there are a few things we need to appreciate.

First, cancel culture is a way for one culture to act against another culture. It is inherently about differences of values and priorities. And this isn’t always bad. Some cultures are incredibly toxic and need to be resisted and overcome. For example, rape culture.

Second, cancel culture is linked to our societal concepts of shame.

And I want to be clear about what I do and don’t mean by shame.

Now, bear with me, because I know shame is often inflicted as an abuse tactic. And my goodness, shaming is a very powerful abuse tactic. But. Abuse is also about the telling of a lie. Regardless of whether we intend or want to inflict the fear inherent within shame itself (and for the record, the Holy Spirit never does this), we can still believe, and most of us do, that some things should not belong in our communities.

And this principle of non-belonging is why cancel culture is linked to (but not the same as) how our society and communities understand shame.

OK, now for number three: when counter-culture focusses on non-belonging, it has two main tools: expulsion and boycotting.

You’ll notice I’ve dropped the term “cancel culture” already and that’s because it gets used in different ways by different people. Merriam Webster defines it as “removing support of public figures on the basis of their objectionable opinions or actions.” That’s boycotting.

Recently though, Jonathan Merritt applied the term more broadly. Writing about the Southern Baptist Convention, he described evangelical “cancel culture” as something that forced out members (and not just leaders) from within the denomination. I’ll pick up on what he said in more detail in my next post, but the point for now is this: what he described is expulsion.

And whatever definition of “cancel culture” you use, it’s more important to recognise these two related-but-distinct tactics: expulsion and boycotting.

We need to take these last two points together because only when we evaluate the purpose and direction of an action can we get a feel for whether we’re seeing ethics in action, or age-old bullying.

OK, let’s walk through four examples to illustrate the above.

This action is also external reputation management. Sure, Twitter did this partly to send a message to its users, but it strikes me that the bigger message is to the world at large, and advertisers, about where Twitter’s ethics and priorities lie.

Example 2: YouTuber Dominic Noble recently rebranded his “You really should read the books” t-shirt to exclude the Harry Potter font.

This is essentially a type of boycott directed at the Harry Potter author JK Rowling, and he did it in response her anti-trans writing. However, despite it being a boycott his action isn’t externally targeted: he’s not trying to change JK Rowling’s attitudes or even tell his viewers to take a particular action. Rather, this is internal curation of his YouTube space as someone who supports trans rights. He’s recognising his responsibilities as a reviewer of film adaptations of books and as he said on Twitter: “There’s a big difference between choosing to stay a part of a fandom and trying to profit off it like I was.”

[Edited to add: He’s since decided to go beyond this (video here) and Lindsay Ellis did a video looking at the question of staying part of a fandom.]

Example 3: Verizon is pulling its adverts from Facebook over inaction on hate speech.

This boycott is an externally directed attempt at community curation. Verizon isn’t trying to change itself, but rather to influence Facebook to change its behaviours. Specifically, Verizon wants Facebook to do better advert placement because at the moment Verizon ads are appearing next to hate speech. And when you look at it from that angle, I wouldn’t be surprised if Verizon’s decision is mostly driven by concern for their external reputation as an advertiser.

Meanwhile, the advocacy organisations behind the “Stop Hate For Profit” campaign (which prompted Verizon’s action) have broader aims. They’re urging all advertisers to suspend their Facebook advertising for the month of July. They’re necessarily different from Verizon because they’re not doing this to preserve their external reputation. Rather, they’re doing it because they believe that Facebook doesn’t do enough to internally curate its platform. They are trying to curate a space external to their own because they believe that is the right thing to do.

A few observations about examples 2 and 3

Let’s pause for a moment.

These considerations are all going to be relevant in the next post when we consider when cancel culture becomes bullying.

OK, on to the last example for now, and it’s slightly older with less familiar names, but what it illustrates is important.

Example 4: In 2017, one of the largest global accounting firms, KPMG, fired five of its partners and another employee over an ethics breach.

For a professional services firm, reputation is huge, because if your people can’t be trusted, you have no business. KPMG’s audit work gets inspected by a regulator and, basically, when these partners received a tip about what particular audit work would be scrutinised, they exploited it.

The firm’s response, once the wider leadership found out, is clearly an example of expulsion. But in contrast to the Twitter example above, the focus is less about internal curation, and more about external reputation management — albeit, as with Twitter, both are applicable. We need to remember that these partners knew that what they were doing was wrong. Their ethics breach was so flagrant, KPMG’s reputation would suffer unsustainable damage if these partners didn’t go.

I say this example is important, because it illustrates how expulsion for the sake of an organisation’s external reputation can be an ethical action. Unfortunately, there are so many examples where expulsion is used abusively, and to shame people who were set up to fail, it can be easy to think that exclusion is always about scapegoating and pitchfork mentality.

No, it’s not. It can be and it is far more often than it should be, but it’s not always.

And this is why we need to be discerning about what separates ethical and transformational counter culture, from toxic bullying and harassment.

That will be the subject of my next post.